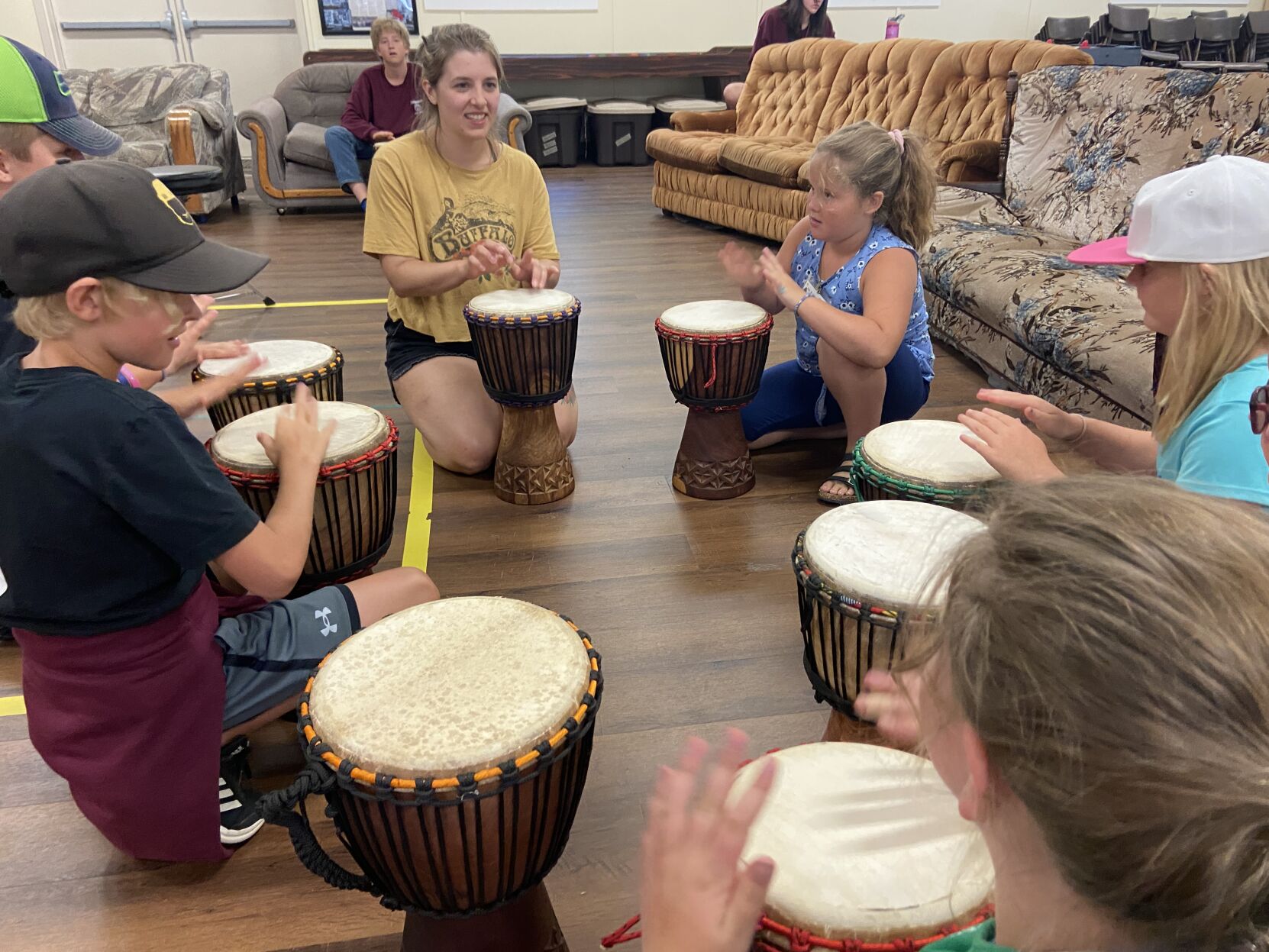 Vanessa Gauvin at camp this summer.

Forgive Vanessa Gauvin if she is rather happy these days.

She is one of the new counsellors at Camp Shagabec is loving her job.

Gavin has studied to become a nurse, but is also known for her musical prowess and has released a lot of original music as a gifted musician, singer/songwriter. Now add a guest music teacher/counsellor at Camp Shagabec, that is, thanks to a grant through Sask Arts.

Camp Shagabec is a summer camp located in the Cypress Hills. It has participants anywhere from the age of 5 all the way to 18 had advertised for a musical artist to act as a counsellor/music teacher and she went for it. It was all from SK Arts to cover the musician’s wage at camp, and MusicCounts Canada for their donation of $15,000 of brand new instruments.

“They had a call out for artists to get involved with them for this grant program.”

Originally formed and known as the Swift Current United Church Camp in 1938 but then was changed to Shagabec using the first letters of the names of the original cam leader who were from Abbey, Aneroid, Bracken, Consul, Eastend, Hazenmore, Governlock, and Swift Current. The camp remains popular and was sold out of space. They are now accepting registrations for next year.

Gaunvin is grateful for the camp’s administration for giving her the opportunity and she is taking full advantage of it. On her downtown, she continues to write new music and garners a lot from the new and fascinating people she has met.

“The idea is to Introduce music to the kids and to showcase a local musician making music and use it as an inspiration fro those who like music. I don’t have a lot of time to like actually teach like composition and teach like a full song, and perform the song,” explains Gauvin. “The opportunities the kids get is that they see me play a song which gets them very excited. I have been doing a ukulele workshop the first day. All the kids go through, I am with them for about an hour and then we switch over to something else.”

There’s a music plan which they can do the following day where they get to chose another facet of music. The kids would get to spend more time with Gauvin and this time they focus on instructs on the camps stage.

“So there’s like drums and keyboard and guitar and ukulele and percussion and, yeah, there’s an electric guitar and electric bass,” explains Gauvin. “So it’s kind of giving kids opportunity especially those in the rural areas, or, you know, especially the due to Covid, a lot of kids didn’t get to be in class and it weren’t in class, so giving them the opportunity to get these instruments in their hands is great. Just so otherwise you may not have the opportunity to play the drums or the electric guitar. So that was kind of more the goal is just to expose them to it and show them. The fact they learn with practise, that you can be just as good as me or better and those people you see on TV and other bands that you listen to.”

“They have always included music in their programming, but mostly by like your hand clapping along or they have like one guitar and like one piano, but there really wasn’t that much of equipment,” explains Gauvin about the Music County Canada grant.

One the camp was able to get these grants and instruments they needed to add someone with experience in playing them. The Camp counsellors already had their hands full.

Despite the lack of actual teaching experience, Gauvin has the leadership, educational, compassionate and empathetic qualities of a camp counsellor to go along with her vast and major musical talent. While in her eduction to become a nurse, she was recording an EP at a southern Sask. music studio.

She was then out in Vancouver and it is high stress, fast pace there. She jumped at the opportunity to come back when she could with Camp Shegabec and couldn’t wait to get started with the young minds.

“It might sound cliche but I mean you’re molding young minds right and you’re trying to reach them in kind of a unique way because that’s what camp is all about, it is just trying to give kids an opportunity to do things that they normally wouldn’t do,” explains Gauvin.

Vanessa Gauvin at camp this summer.