Posted on 7 September 2022 by Matthew Liebenberg 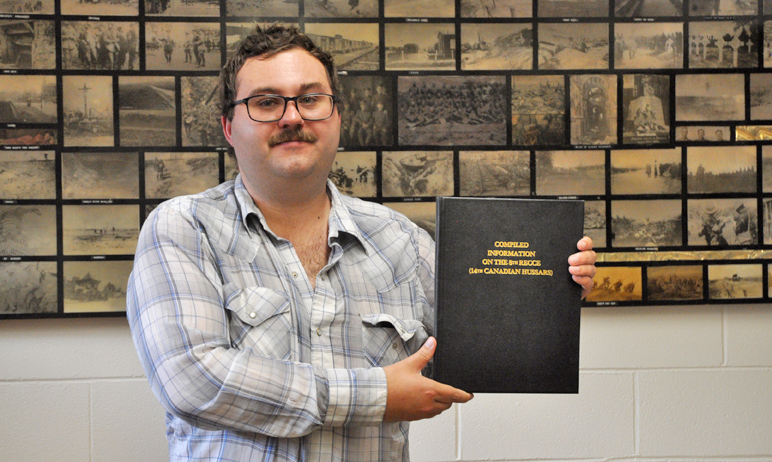 An initiative by the Royal Canadian Legion Branch No. 56 in Swift Current to honour veterans through personal stories of service is continuing for a second year.

The purpose of the Veteran of the Week program is to honour veterans in the weeks leading up to Remembrance Day.

The program’s format has remained the same for 2022. It started in the first week of August and will continue until Remembrance Day, featuring information about the life and service of 15 different veterans.

Swift Current Legion member John Griffin, who coordinates the program, said the response to this initiative was very positive.

“The reason we’re continuing the program is just the amount of reception that we got for it,” he mentioned. “People seem to enjoy it. The veterans who are featured and the families of the veterans who are featured were very happy with how it turned out. They enjoyed seeing themselves or their loved ones being honoured and remembered. So really just overall success of last year made us decide to carry on the program and we’re hoping it will be a yearly thing.”

He believes it is important to share these personal stories of veterans to create awareness about the significance of remembrance.

“It’s the personal stories that make remembrance come alive,” he said. “You can read about different conflicts throughout history in school and textbooks, but it’s really the personal stories. When you read this guy was a father of three or this guy was newly married and his first child was on the way. Or this guy was 16 and he lied about his age to join the forces and serve his country and maybe he lost his life doing that. It makes it more personal and I think it makes it easier for people to relate to veterans. These are just ordinary people doing extraordinary things.”

The Swift Current Museum’s annual veterans banner program was the inspiration for the Legion’s Veteran of the Week program.

“You see those banners around Remembrance Day and we thought for ourselves at the Legion what if we were to kind of play on that and tell the personal stories of veterans,” he explained. “It’s just a way for the Legion to interact with the community and promote remembrance.”

The success of the program will rely on submissions by veterans themselves or their families. Submissions for this year’s program are still welcome.

“The criteria are pretty broad,” he said. “Basically, it be anybody who served. It doesn’t matter what time period of service, whether that be before the First World War all the way up to the present day still serving. We’re trying to keep it local, Swift Current and southwest area or at the very least province of Saskatchewan. … Veterans can submit information on themselves, someone can submit information on their grandfather, or it could be a family member or relative. It can even be your neighbour.”

People are requested to provide as much information as possible about a veteran. They are welcome to submit their own write-up or otherwise Griffin will use the information provided to prepare the text for the weekly feature. The submission should include at least one photograph. If this is not available, then an image of a cap badge or a unit patch can be submitted for use with the text.

About 40 per cent of last year’s featured veterans were submitted details. Griffin researched and wrote the remaining profiles.

“For the ones that I research, I use my knowledge and skills that I’ve learned throughout my career as a genealogist who specializes in Canadian military records,” he said. “I go through all the service records and stuff like that, and from that I do the write-ups.”

The veteran profiles featured during the initial five weeks of this year’s program include individuals who served in both world wars and in Afghanistan.

The story of each veteran is presented in a video posted on the Swift Current Legion branch Facebook page and YouTube account. A written document about each veteran with the same information is also posted on the branch website (see branch projects under the About Us tab).

For more information about the Royal Canadian Legion Branch No. 56 Veteran of the Week program or to make a submission, contact Griffin at 1-306-741-0876 or send an e-mail to rclbranch56sc@gmail.com