Posted on 28 July 2022 by Matthew Liebenberg 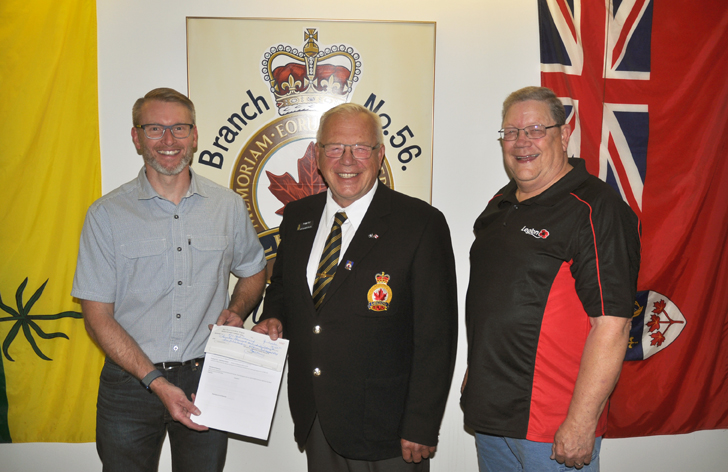 The Royal Canadian Legion Branch No. 56 Swift Current is receiving a helping hand from a provincial grant program to make improvements to their building.

An amount of $14,163.60 from the Saskatchewan Veterans Service Club Support Program will be used by the Swift Current Legion to upgrade the roofs over both front entrance areas.

Ruf appreciated the financial support from this grant program towards the expenses to keep the building well maintained.

“It just helps us keep the building looking good and we don’t have to dig into our money to do this,” he said.

The upgrading of the entrance areas will help to reduce maintenance and it will also give those areas a different appearance.

Moss is growing on the flat roof and the change in the roof angle and structure will help to reduce maintenance. Pratt noted that the Legion is familiar with the potential problems that a flat roof might cause.

“We had water leak into the hall upstairs in the hallway because of the flat roof,” he said. “So we’re hoping to avoid future leaks.”

The work will be done by local contractors, who have been very supportive in the past when the Legion carried out building maintenance and improvement projects.

According to Ruf the proper upkeep of the Legion building will ensure its ongoing usefulness as a facility to the benefit of veterans and the wider community.

This is not the first time the Swift Current Legion is benefitting from this provincial grant program. It received the maximum available amount of $25,000 in 2021, which was also used for various building improvements.

“We put new doors on the back of the building, new doors on the side of the hall, and we also tinned part of the front where the stucco was and it was starting to deteriorate,” he recalled. “So we covered it up with tin. It’s good now.”

The provincial government established the Saskatchewan Veterans Service Club Support Program in 2019 as a means to support the long-term sustainability of veteran service clubs.

“It’s something that we had heard about from a number of Legions around our province in terms of the needs they face when it comes to being able to upkeep their facilities and their buildings across the province,” Hindley said. “And I think our military liaison from the provincial government at the time had heard that as well, and brought it back to the premier and to the cabinet as a potential area for investment.”

Registered, non-profit veteran service clubs, Legion branches and Army, Navy, Air Force Veterans (ANAVETS) units in Saskatchewan can apply for grants. Funding was provided to 97 grant applications during the 2021-22 financial year, when the maximum annual amount per club was set at $25,000.

The provincial government delivers the program in partnership with the Royal Canadian Legion Saskatchewan Command and the ANAVETS Saskatchewan Provincial Command. There are two intake periods annually for grant applications, and $1.5 million is available in the 2022-23 financial year for this program. The maximum annual amount per club increased by $5,000 to $30,000 for this year.

“We were able to bump that up a bit,” he said. “I think we probably did that as a result of seeing some of the applications that were coming in. Of course, as we’ve seen the last couple of years, the cost of everything has gone up and that would impact clubs like the Legions across this province who are trying to buy materials and hire contractors and that sort of thing to do some of this work.”

Hindley felt this program is a practical way to support veterans service clubs in communities across the province.

“They face pressures like a lot of organizations do, and some of these other organizations do have programs that they can apply for,” he said. “We just felt that when this was brought to our attention a number of years ago, we thought this was something that really is needed across this province.”

He added that the grant program is both an acknowledgement of the service of veterans and the role of these clubs in communities.

“It’s the least we can do as a government, one of a number of initiatives that we do to try and support our local Legions and to support our veterans, those who have served and do serve in our armed forces,” he said. “I think it’s a token of appreciation for what they do and being able to help support local Legion halls like this so they can stay viable, continue to offer services in communities. … Halls like this provide far more than just offer a place for our veterans to gather. They’re a place that can be rented out for a variety of functions, fundraisers, weddings, those sorts of things that happen, a number of community events. So in a lot of communities, they really provide a central location, a hub for people in those areas.”