Posted on 2 June 2022 by Matthew Liebenberg 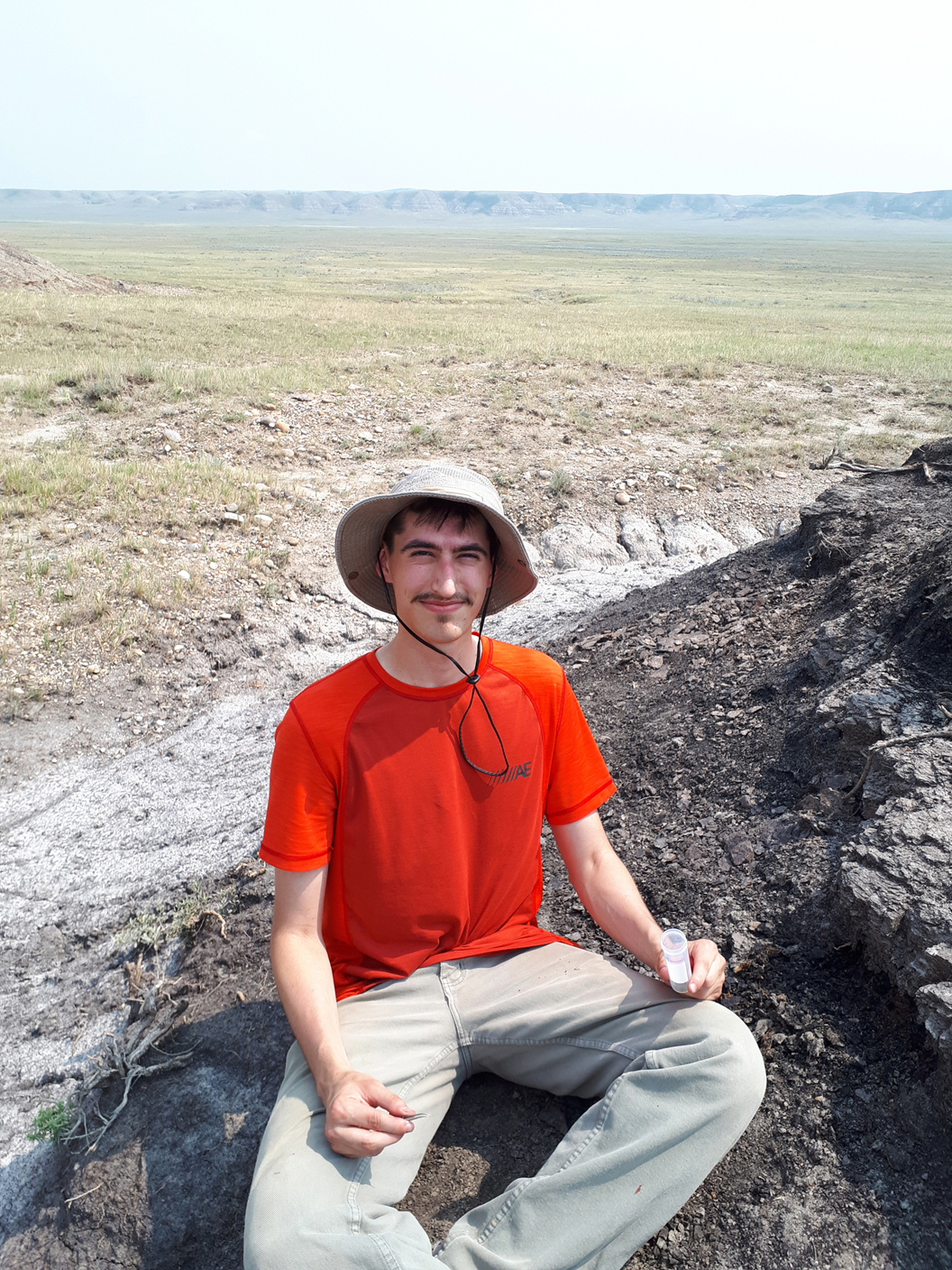 Scotty the T. rex has been the focus of scientific interest since its fossilized remains were uncovered in a remote spot in the Frenchman River Valley near Eastend in 1991.

A rib bone from Scotty has been the focus of innovative research carried out with the CLS synchrotron in Saskatoon since 2021. The research team includes Royal Saskatchewan Museum Curator of Palaeontology Ryan McKellar, University of Regina physics professor Dr. Mauricio Barbi, and Jerit Mitchell, an MSc student in the University of Regina Department of Physics.

The CLS synchrotron produces extremely bright and focused light, which is actually millions of times brighter than the sun. Powerful magnets and radio frequency waves inside the synchrotron are used to accelerate electrons to near the speed of light, which produces infra-red, ultraviolet and X-ray light.

The different types of light are directed down beamlines to experimental stations, where scientists use the light for a variety of experiments.

“We’re going into the second year on this particular project,” he said. “So we’ve been doing analytical work at CLS on different beamlines, which means that we’re up there multiple times, looking at it with different techniques.”

The very bright light provided through the beamlines makes it possible to do really high-resolution scanning of fossil bones.

“When you’re going in for something like a CT scan at a hospital, you’re usually talking about structures that are around a millimetre,” he said. “The material that we’re looking at are structures that are 0.04 of a millimetre. So they’re absolutely tiny to the point where you can see the growth layers inside the bone. We can see individual cell structures or pockets for cells inside the bone, that sort of a thing.”

Sections of Scotty’s massive rib cage were found when its skeleton, which is about 67 million years old, was uncovered in the Frenchman rock formation.

“The ribs on Scotty, near the middle of the rib cage, are roughly four or five feet long and at their widest, where they swoop in to connect to the spinal column, they are five or six inches wide,” he noted. “So the section of rib we’re looking at is almost like your wrist, something around that size in diameter. There’s a little puckered piece on there that is maybe an inch thicker than it ought to be. It’s a damaged area on the rib where it healed up and it left this huge scar on the bone.”

This piece of rib broke and healed before Scotty died, and it is ideal for the purpose of this study due to the puckered area.

“There’s a lot of additional nutrients required to grow the bone again,” he explained. “So there’s a lot of extra vascular structure or blood vessels running through the bone in that area.”

Another reason why Scotty’s bones are useful for this research is because it came from the same rock layers than dinosaur bones used in related research in the United States.

“There’s sort of an interesting problem or question that’s come up in palaeontology in the last five years or so, where people have been looking more intensely for soft tissue preservation,” he said. “There are some reports from the United States. A team led by Mary Schweitzer dissolved dinosaur bones and they recovered spongy materials that are left behind that look to be soft tissues. … So the question is how do these things get preserved, are they really part of the original animal, or is it some sort of bacterial film or something that’s filling in a void.”

The goal of the research carried out through the use of the CLS synchrotron is to look at larger blood vessels trapped inside dinosaur bones without destroying it.

“So basically, CT scanning the bone and looking at where these blood vessels run through the bone itself,” he said. “And then coming in and cutting a section that allows us to access the bone without dissolving it and doing chemical mapping on those surfaces to see which chemicals or which elements are there and how they’re held together to make different molecules or compounds.”

McKellar said this research with Scotty’s rib bone is unique, because they are looking for larger blood vessels.

“These large blood vessels are new, but smaller structures have been recovered previously,” he mentioned. “Studies going back five to 10 years have been looking at some of these very small cell size structures that are still preserved. We’re the first group to look at these coarser structures or these bigger structures and trying to see whether or not it’s a reasonable target for soft tissue preservation.”

They started by looking at how the healed bone on Scotty’s piece of rib is different from the surrounding bone.

“We were surprised to find that we have this huge blood vessel running through and it showed up very well in the CT scans, because later we found out it that it was rich in iron,” he said. “It lights up as very high contrast in the X-rays with the CT scans and we were able to trace it all the way through the bone. So it’s this big complex network of blood vessels and it wasn’t something we were expecting to find. It gave us a really cool target for looking for this sort of material or soft tissue preservation.”

This research is providing new insights into how dinosaur skeletons are preserved and what scientists can expect to find preserved in the fossil record.

“There’s some hope out there that we might be able to look at things like proteins that are preserved in some of the soft tissues,” he said. “But we’re trying to look at it from a different standpoint where it’s basically if we’ve got these larger structures, what minerals are they preserved in, is it realistic to start looking for proteins in these larger structures, or is it different than these really microscopic things that’s being recovered from the United States.”

The exciting part of this research for palaeontologists is the potential that some of the soft tissues and other molecules from millions of years ago have been preserved inside the fossil bones. This type of research can also have other benefits.

“Over the last five or 10 years the synchrotron studies and generally just CT scanning fossils have become a really big push,” he said. “It’s allowed us to do more detailed work on these skeletons and it also created permanent records or easily shareable records. It results in a 3D model or a data set that we can send to a colleague in Japan or somewhere and they can be working on the exact same specimen that we are here at the same time. So it’s sort of a spectacular advance for palaeontology.”

Their intention is to use the very bright light of the CLS synchrotron to scan other dinosaur bones from the RSM’s collection, including some duck-billed dinosaurs that were collected in southwest Saskatchewan as well as Thescelosaurus, a smaller type of dinosaur.

Other students are already using CLS beamlines to scan amber pieces that were found in Saskatchewan to create three-dimensional models of insects preserved inside the amber. This will make it possible to identify the species of insects and it will provide additional information about prehistoric environments and habitats.

“There are currently three different students working on different aspects of Canadian Light Source and applying it to palaeontology here at the museum,” he said. ““We’re thrilled to have our students working on this sort of material and they’re doing some really stellar research. Hopefully within the next year or so, a lot of this will come up in publication through peer review scientific papers and we’ll have more definitive results to talk about, but at this time we’re just thrilled to see what the students are doing.”