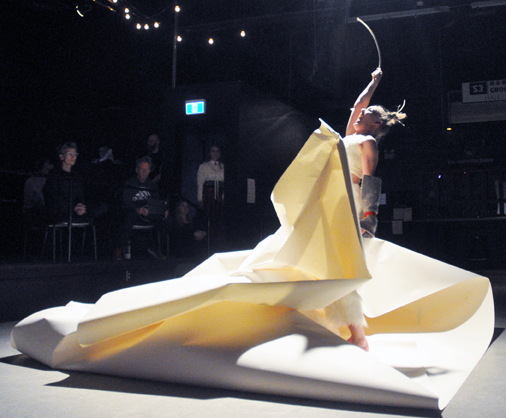 The distinctive career of Métis artist Edward Poitras is the focus of a four-part survey in four different locations across Treaty 4.

The first installment of Revolution in the Rock Garden is on display at the Art Gallery of Swift Current until May 24.

He shared details about his career and the artworks in this exhibition during an artist talk at the gallery, April 24. He also spoke afterwards to the Prairie Post about the exhibition.

He was born in Regina in 1953 and currently lives on the George Gordon First Nation, where 14 possible unmarked graves were recently found at the site of a former residential school.

He felt it was essential to have this four-part exhibition at locations within Treaty 4 territory. The other venues will be the Moose Jaw Museum and Art Gallery, Godfrey Dean Art Gallery in Yorkton, and the Esplanade Arts and Heritage Centre in Medicine Hat.

“That was important, because that was one of the subjects I was looking at throughout my career,” he said. “Even in 1974 in my art class, I made a rawhide case that was for the Treaty 4 documents, which another student had rewritten and did it on rawhide. I made a rawhide case for it and then it was sent to the Queen, I think. But I was a student then. I was young. I didn’t really see the significance of it.”

Treaty 4 was signed at Fort Qu’Appelle on Sept. 15, 1874. Most of the land under this treaty are located in southern Saskatchewan, but it includes sections of western Manitoba and southern Alberta.

“Two years from now in 2024 it’s going to be the 150th year since the signing of Treaty 4, and I guess in a way this series of exhibitions is leading up to that event.”

This exhibition project provided an opportunity to revisit his work and evaluate its meaning within the Treaty 4 context.

“What I was finding was some of my work was being recontextualized somehow and I thought it would be important to do a series of shows within the Treaty 4 context and have the work addressed within that context,” he said.

His age was also a factor in the decision to locate works from various public and private collections in Canada for an exhibition. It also includes works from his personal collection.

“Because of my age, I felt it was important to try and gather up as many pieces and even to find out where they are,” he said. “A number of pieces I totally forgot about, and so it’s a surprise when I see something that I forgot that I made.”

He felt it was an interesting experience to revisit a variety of artworks made over a period of four decades.

“It’s like seeing an old friend and of course when it’s a good piece I enjoy seeing it,” he said. “So to relive that again and just seeing the piece again. And of course, you evolve and you start thinking maybe I should have done this or I should have done that. Why did I put that in there? So it’s interesting in that respect just looking at it again.”

The four parts of the exhibition will feature a mix of installation works, painting, sculpture, photography, and video. There are also new works included in the exhibition.

“That’s also another benefit,” he said. “All of a sudden I can put in a new piece just to maybe tie up some loose ends or something.”

“A very interesting man, a great storyteller,” Poitras said about Wiens. “His sensibility was very inspirational and just spending time with him and hearing his stories, I feel very fortunate to have experienced that.”

Another new piece in this current exhibition is titled Treaty Four Monument. He created this installation by using a ladder and coyote from a previous work and adding an axe. The axe creates a direct link with Treaty 4. Each Indigenous signatory of Treaty 4 received a medal, and the scene on the medal showed the Queen’s representative shaking hands with a First Nation man with an axe visible between them.

“Basically, it’s just taking elements and putting them together,” he said about this installation. “Will it stay like that? I don’t know. Half the coyote is on this side. I never spoke about this, but the coyote is travelling in time. So it’s going into this wall. The other half is probably going to come out in another exhibition in the future. So half of him is here and the other half is somewhere else.”

Various other works in the exhibition reflects his efforts to learn more about the past and to find out what actually happened.

He used pages from a book describing the massacre of Indigenous women and children in the American West to create the artwork Small Matters during the 1980s.

“Talking about it can be difficult, even reading about it,” he said. “But making artwork out of it, it becomes something else. It’s something that’s maybe a bit more manageable. I take this history and rework it in a way that’s I guess a bit more subtle.”

His interest in Treaty 4 was partly due to discovering that an ancestor was a witness during the signing of the treaty. When he created the artwork Mask his X during the 1980s, he took pages from a copy of the treaty and blanked out words with white dots. He created another art piece by rewriting the treaty.

“For myself it was a way of trying to arrive at an understanding of this document,” he said. “What did it actually mean and what were the people thinking at the time that this document was being presented to them. My ancestor Pierre Potrais is also on the document, listed under the witnesses. So I was always curious as to what his involvement was with the treaty. Did he do a good job and acting as a witness, what was his position et cetera. These were questions that I had. I kept working with this subject, doing other pieces.”

He referred to his enduring interest in performance art during the artist talk. His interest in dance started as a student, when an art teacher told the class that dance was one of the highest art forms. Over time he developed in interest in modern dance, and he has been collaborating for close to 40 years with Robin Poitras, the co-founder of New Dance Horizons in Regina.

Edward is the co-artistic director with Robin at New Dance Horizons, and there were dance performances after his artist talk.

A dance performance with a horse theme, called Quadriga, was presented outdoors near the art gallery. This was followed by an event at the Lyric Theatre. There was a performance of the Red River jig by Vancouver-based Métis master jigger Yvonne Chartrand. This was followed by the screening of the short dance film Eclipse, which was created by Edward and Robin during the 2008 solar eclipse in Mongolia.

The event concluded with a dance piece about global warming and the Arctic, performed by Krista Solheim. It is called This and is part of a dance suite titled This and That, created by Edward and Robin.

“We’ve been working together for many, many years,” Robin told the Prairie Post. “When Edward decided to do the Revolution of the Rock Garden, the galleries were all really interested in his performance practice. He also choreographs. People always think that he does the sets and I do the choreography, but it’s not true. We work very collaboratively. …So it’s been really interesting working together over 40 years. I’m learning more about visual arts and it’s a seamless approach that we have. It’s really fun to work together.”

The exhibition Revolution in the Rock Garden by Edward Poitras is on display at the Art Gallery of Swift Current until May 24. Admission is free. The gallery is open Monday, Friday and Saturday from noon to 5 p.m., and Tuesday to Thursday from noon to 6 p.m.