Posted on 18 August 2021 by Matthew Liebenberg 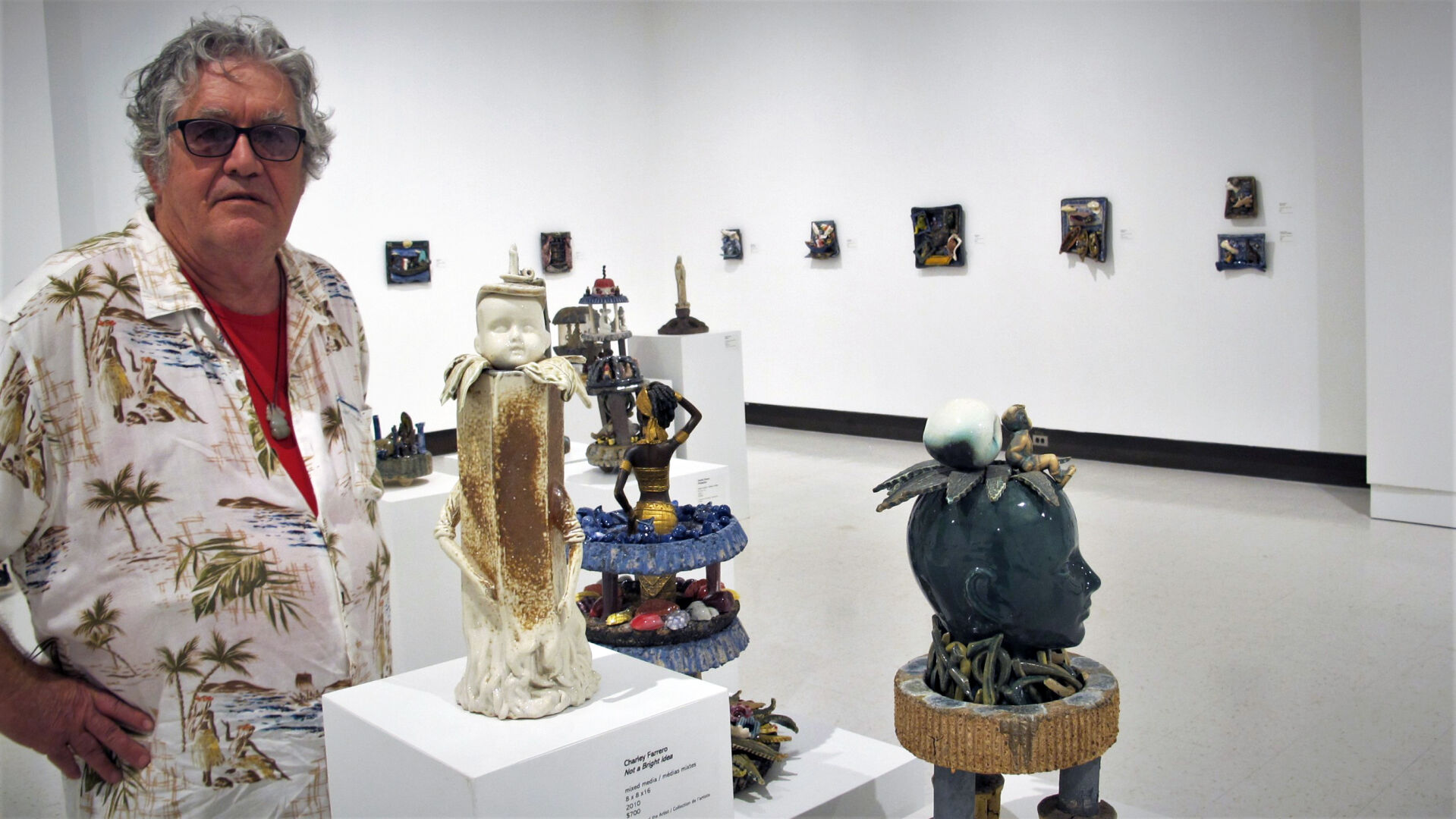 Ceramic artist Charley Farrero stands with his works currently on show in an exhibition at the Art Gallery of Swift Current.

Saskatchewan ceramic artist Charley Farrero feels his work speaks for itself and it makes a clear statement about his approach to art.

A large collection of his work is currently on display in the exhibition A Certain Detour at the Art Gallery of Swift Current. The gallery will host a reception with the artist on Aug. 20.

The exhibition is composed of 36 wall pieces and 24 standalone sculptures that were created during the past three years.

The exhibition was curated by Art Gallery of Swift Current Director Heather Benning. This is the first time all the works in the exhibition are shown together in a single display. The wall pieces have already been shown in Edmonton and Winnipeg.

“I’m really happy that the curator Heather Benning decided to show them all,” Farrero said. “I’ve got more at home, but some pieces are a little fragile to show in public. It’s good to have it all in one. It’s a work of three years plus some ideas that came from before. So it’s really cohesive right now.”

The title of the exhibition is a reflection of the artist’s goal to create a show that can be explored and discovered while visitors meander through the gallery.

“I wanted people to take a certain detour,” he explained. “The two words are in opposition. Certain is definite and detour you don’t know where you’re going. So I wanted to create a certain ambiguity.”

He felt the exhibition’s title will make people curious to discover more and to take a closer look at the works on display.

“It’s also a certain detour in the clay world to put clay on the walls,” he noted. “It’s not something you see often, except in big murals. So the clay of little vignettes and tableaus that I have on the wall is a detour. It’s different. … So A Certain Detour is just to tease the curiosity of people and my own.”

He has been working as a ceramic artist since 1972 and he invented his own voice through his work that reflects his approach as an artist.

“My voice is creating some work that stimulate some reaction,” he said. “Sometimes curators, gallery directors and critics try to pigeonhole you into a group or a movement. That’s a work like so and so, it could be the funk movement or the pop movement or whatever. My own voice is outside the status quo, outside any movement. Sometimes I feel I’ve got a little voice, but sometimes I’m loud too.”

He has been influenced by the funk movement of California ceramics as well as Bauhaus traditions, surrealism and Dadaist approaches, but all these schools of thought and trends have been combined with his own personal ideas and concerns.

“I’ve learned in the seventies with some teachers who came from California and said you can do anything in clay if you want, but generally I’m influenced by everything,” he said.

Farrero wants people to react in whatever way they want to his work and he does not feel a need to explain the meaning of works to viewers.

“Some pieces are based on the political or social context, some are personal, and other pieces are humoristic,” he said. “So I want people to question, to wonder. I don’t explain my work with words beside it or whatever. It’s for people to be curious, to spend some time, and to take whatever they want. I want to create an emotion in the public.”

He believes it is the role of artists to create works that will cause an emotion in people, but artists should not attempt to dictate an emotion.

“It’s just to create work so there’s an emotion, and I don’t dictate too much the reaction,” he said. “I just want them to react, but whatever they want. They might hate it, they might love it, but at least they get involved with my work.”

His works make observations about life, social issues, history and culture, and are influenced by his own views and personal experiences.

“All my pieces are commentaries,” he said. “Sometimes social comment, political comment, personal comments, or it can be a funny comment. And you can agree on the comments or you can disagree. I use several little figurines over and over â€” the frog, the rooster, and a little boy that I use all the time, which is kind of a little self portrait too.”

His works reflect on broad societal themes and issues as well as the personal and local. For example, the work Americana is a commentary on the class society in the United States. The sculpture N.A.F.T.A â€” Not Always Friends to America refers to the relationship between the United States and its nearest neighbours, Canada and Mexico.

There are works in the exhibition that reflect on the past and colonialism. The sculpture Sangre refers to the connection between colonialism and religion, and is related to the practice of constructing Catholic churches on old Aztec pyramids. The wall piece Wascana is a commentary on the near extinction of bison in North America during the 19th century.

There are also lighthearted works in the exhibition. The sculpture To the Ball is related to fables about a princess.

“I’m having fun and sometimes visually I create a little scene like To the Ball with the shoe and the pumpkin,” he said. “I mix stories up a little bit and sometimes I use fables. There is another piece of an elephant and a mouse. So I’m having fun. They are visually pleasing.”

Other works in the exhibition reflect his personal passion for food, and several works were influenced by the demolition of the last wooden grain elevator in Meacham. It was a familiar sight from his studio and it was therefore a difficult experience.

“I’ve been living in Meacham for 40 years and that elevator was kind of a companion,” he said. “I actually didn’t want to see it when it fell down. My wife went and took a video of it. So the way I dealt with it was I went into my studio and I made six elevators and then transformed them. I did all of this in not even two days. Then I transformed them and added them to other things. That was an emotional moment and I wanted to do it.”

Farrero is originally from Paris, France. He decided to come to Canada in 1969 after completing his studies in mathematics and education. He worked as a systems analyst in Regina, but a decision to take classes in ceramics resulted in a career change.

“I really got taken by it,” he said. “I just got that passion. I did not decide to be an artist. I just took a hobby class and then the thing took me over. I’ve been working with my mind a lot with the mathematics, but there’s the same curiosity. Mathematics is fairly complex, and ceramics are fairly complex too, because there’s the chemistry of the glazing and that’s what is really interesting. So all this together got me into ceramics.”

The exhibition A Certain Detour will be on display at the Art Gallery of Swift Current until Sept. 4. Admission is free, and gallery hours are Monday to Wednesday noon to 5 p.m., Thursday noon to 7 p.m., Friday and Saturday noon to 5 p.m. The reception with the artist on Aug. 20 will start at 7 p.m. There will be live music, food and drinks.

Ceramic artist Charley Farrero stands with his works currently on show in an exhibition at the Art Gallery of Swift Current.