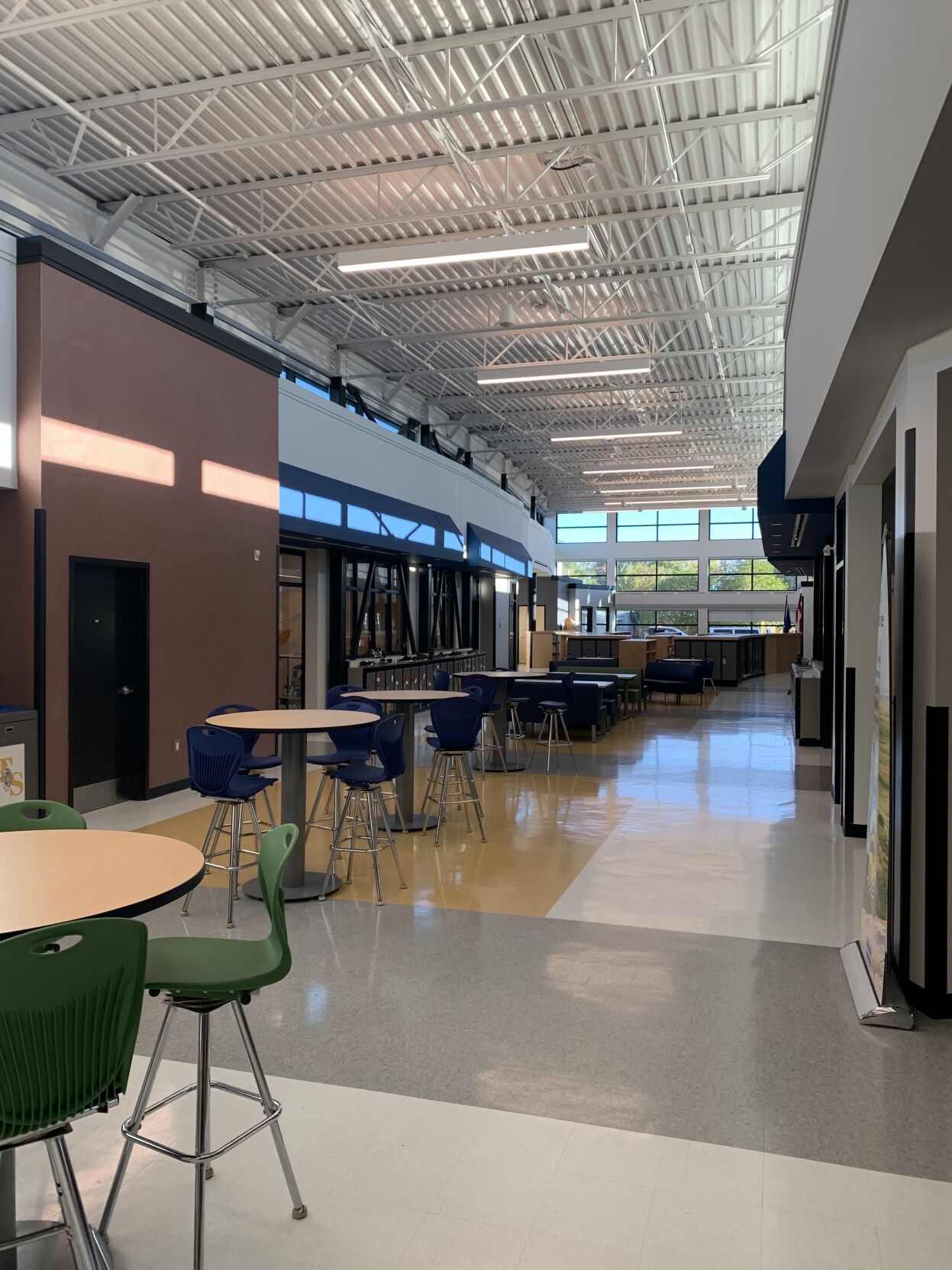 Pictures of the new Tilley School. the landscaping is still in progress, but it is otherwise complete.

After 73 years of operation, Tilley School moves into their new building, which will be opening on September 28th.

The project was first announced by the Alberta Government in 2018, that Tilley would be getting a replacement building. This couldn’t come at a better time, said principal Stuart Pietersma, as the concrete foundation of the old building has begun to deteriorate.

“The new building, design wise compared to the old one, they’re not even comparable,” said Pietersma. “There’s different philosophies in education, with bringing in more natural light to lots of windows. And basically, our new building has that outside on the inside kind of feel. It was designed kind of like an old storefront or an old town or village and downtown sections kind of feeling with the storefront and canopies over the classrooms. There’s lots of glass at the front of the classrooms into the center hallway. It’s all on one level, you can stand at one end and see directly outside from the opposite end. The gymnasiums have large glass sliding doors, so it’s intended to be very open and very welcoming and very inviting.”

The building will also feature solar panels along the roof, to allow for the building to generate some of its own power, as well as lights that adjust automatically to the level of natural light already in the room and manual blinds to help with any potential glare from the sun.

“The old building was a typical 1940s and 1950s school, right, where you had your exterior windows,” said Pietersma. “You had your long dark hallways with lockers and you know very different in design where it didn’t lend itself to a lot of common learning or gathering areas to allow for kids to gather in smaller groups. It was basically stay in your classroom and stick to your classroom that was essentially the feel of the old building. This is quite the opposite. It was designed with the intention of getting kids to learn in a collaborative setting. They’ll have the freedom and have the flexibility to learn in an environment that’s basically conducive to their self learning or the way that they need to learn.”

Tilley School has about 100 students registered this year, which Pietersma said is about their average student body from previous years as well.

To better accommodate the Hockey Skills Canada program, the new building offers a classroom directly attached to half of the new gymnasium, and the building itself is still only a short walk to the community rink.

“In the past our gym was small, and the location of the Hockey Academy didn’t allow the kids to have access to the gymnasium for Hockey Academy time because there was often a  Phys Ed class going on,” said Pietersma. “The new gym, we have the ability to divide the gym in half with a curtain, it’s big enough that now we can basically operate two classes in there at once and the fitness room which houses our hockey Academy skills and equipment and has a direct door into one half of the gym. So kids learning have a little bit more of a flexible environment and have a little bit more opportunities to do different things during their Hockey Academy programming when they’re not on the ice.”

Something that remains, however, is the Passion Options program, which allows students greater flexibility and opportunity in their chosen optional classes.

Instead of having option classes, such as art or foods classes, being spread out in single period blocks throughout the week, Tilley School instead has these courses blocked off for the entirety of Friday afternoons.

“The whole premise behind it is kids have a chunk of time during the week, it’s usually four periods during the week that are usually spread out,” said Pietersma. “Traditionally, they’re done at school, right so you have an hour and 10 minutes to do foods, or band, or do art. What we’ve done is that it’s allowed us to do some different activities. So for example, we can travel to Brooks and participate in welding at the college and through a partnership with a welder in the college. We’ve done some lifestyle pursuit options where we don’t have a golf course within 30 kilometers of us but having a dedicated Friday afternoon, the kids can go to a golf course and actually engage in that particular activity. Same thing with canoeing, we’re surrounded by different reservoirs. And the old Lake Newell’s not far from us, it’s a 20 minute drive on a bus and, again, we’ve got dedicated time where we can engage in that type of activity.”

In the past, Tilley School has partnered with other schools in Brooks to allow students more options on these Friday afternoons by allowing the students to travel to the larger school for their options. This has currently been suspended due to the pandemic, however, there is hope for this part of the programming to continue in the future.

“We’re just really appreciative of all the community support and the different partnerships that have helped to make the school come to a reality. For the community of Tilly and the surrounding area to be gifted a school of this nature created by the provincial government is truly a special gift,” said Pietersma.

Pictures of the new Tilley School. the landscaping is still in progress, but it is otherwise complete.