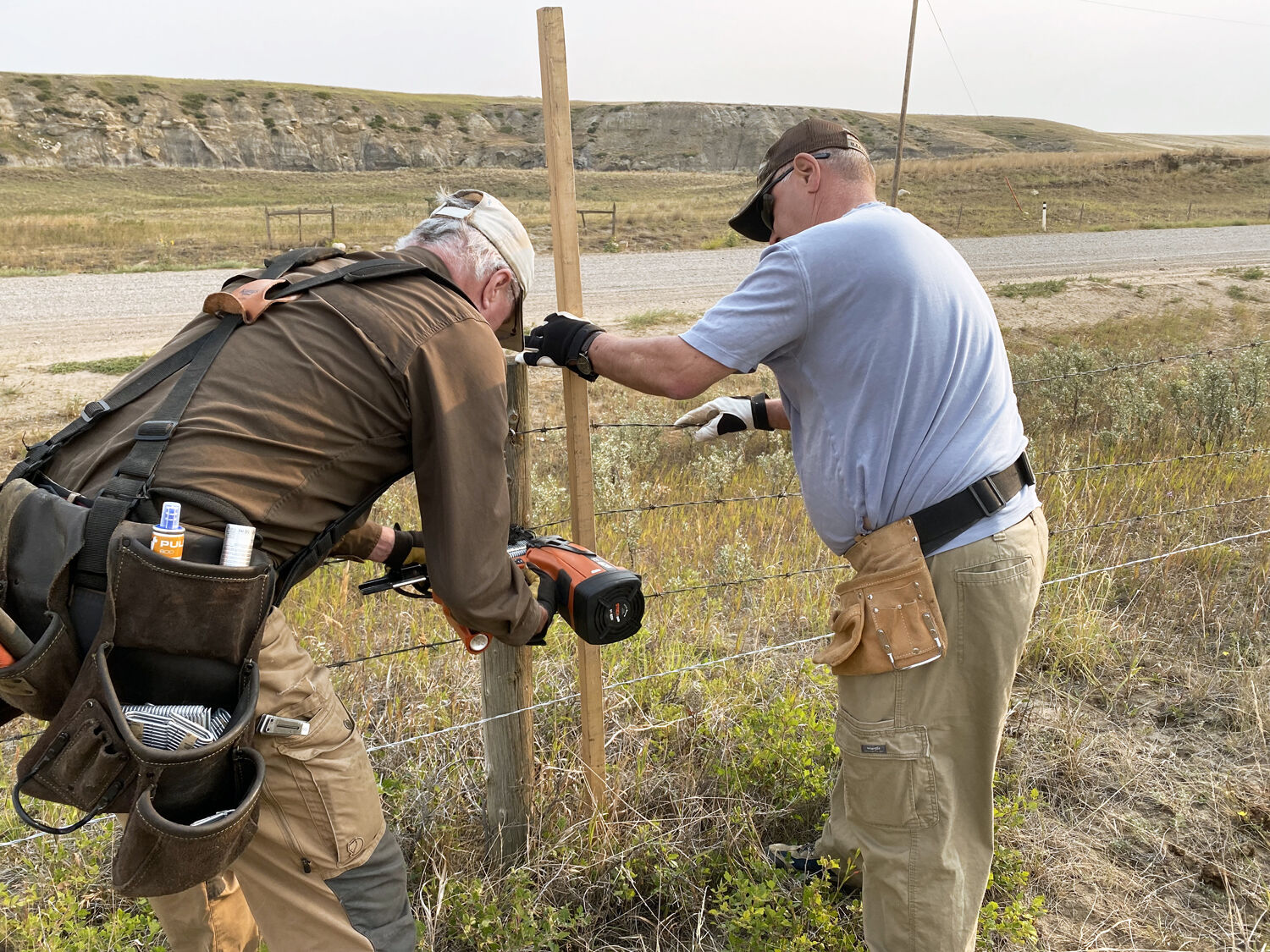 While many residents may never see it, let alone appreciate it, thanks to the collaboration of the Alberta Fish and Game Association (AFGA) and the Alberta Conservation Association (ACA), many more kilometres of fencing just became antelope-friendly.

In many pockets of the Southern Alberta, there are kilometres of fence which allow pronghorn and deer with no antlers to go through fencing to escape predators while still maintaining a barrier for livestock.

“The Alberta Conservation Association, they’ve done quite a few studies on pronghorn crossing and typically pronghorn won’t jump over a fence, in Alberta is actually quite rare. So what they prefer to do is crawl underneath it. And that requires a wire height of minimum 16 inches for them to do, a lot of the cattle fences built in southern Alberta just aren’t that tall,” explains Schwanky, who has been with the project for a dozen years. “Just walk along a mile a fence line in Southern Alberta sometimes and you’ll see one or two spots that maybe become traditional crossings for the pronghorn where there’s a dip in the landscape or something like that, The original idea was to make it easier for the pronghorn to cross under fences essentially under any stretch. We are using smoothed wire on the bottom instead of barbed wire. The rationale behind that, is it prevents injury to the pronghorn. They are quite thin skinned and have quite brittle hair, so when they crawl through (barbed) fences, they get a lot of hair breakage, a lot of hair loss and also they can get quite severe wounds on their backs with bigger barbs on the bottom. So what we’re doing is we’re actually doing is setting it at 18 inches.”

They replace the bottom wire which requires pulling all of the fencing staples out and then re-stapling not only that bottom wire but then reconfigurations the other two rows. They have three automatic staple guns to make the project go faster, but it is still a lot of hard work.

The project started with Canadian Forces Base Suffield. The base decided their perimeter fences, more pronghorn-friendly. They did about 50 kilometers of the fence there the first year. Schwanky notes the project was only supposed to be “a one-off, one-time” event, but it has grown into this year being year 12.

Schwanky says that “quite a few years ago”, the Alberta Conservation Association radio-collared quite a few pronghorns and identified their key migration routes in the province and so he follows those routes with this particular fencing project’s and typically works within those migration areas.

He says the tradition and the solid reputation of the project helps and they get a lot of cooperation.

“A lot of its just came from word of mouth (to go on specific land areas). One day we’d do the fence and then neighbours would talk and then the next day and the next day. After the Suffield fencing that first year, that’s when we moved to private landowners and we’ve been working with the private landowners for 11 years now. We started just south of Manyberries, and the landowners we worked with there said what a great project it was and was a great success it was for them. It really grew from there.

“Now we’re trying to expand that a little more throughout the pronghorn range. The big benefit now we’re seeing is that a lot of landowners when they’re constructing new fences are constructing pronghorn friendly as well.”

It is all volunteer work other than a staff representative from both ACA and AFGA, like Schwanky. He says many come from urban areas as well as landowners and their families and of course those who hunt who want to give back to landowners who allow them to go on their land to hunt in the fall.

There is also a lot of support which comes from the two association’s memberships which are given the heads-up through club communication about their next work areas. There are about 90 clubs and he says they had to turn people away this summer.  There was actually waiting lists of volunteers wanting to participate. They can volunteers signed up in April and May.

Other than labour the costs for materials is covered by a grant from the Alberta Conservation Association and the government, not to mention corporate partner support. They have enough funding to do three projects per year and about eight to ten miles per project or about 24-30 years per year.

This year, everything went as planned. Those in both Writing-on-Stone, but especially in the Orion area had to work in some extreme heat and in the Sandhills area there was some logistical issues moving people around but they got it done.