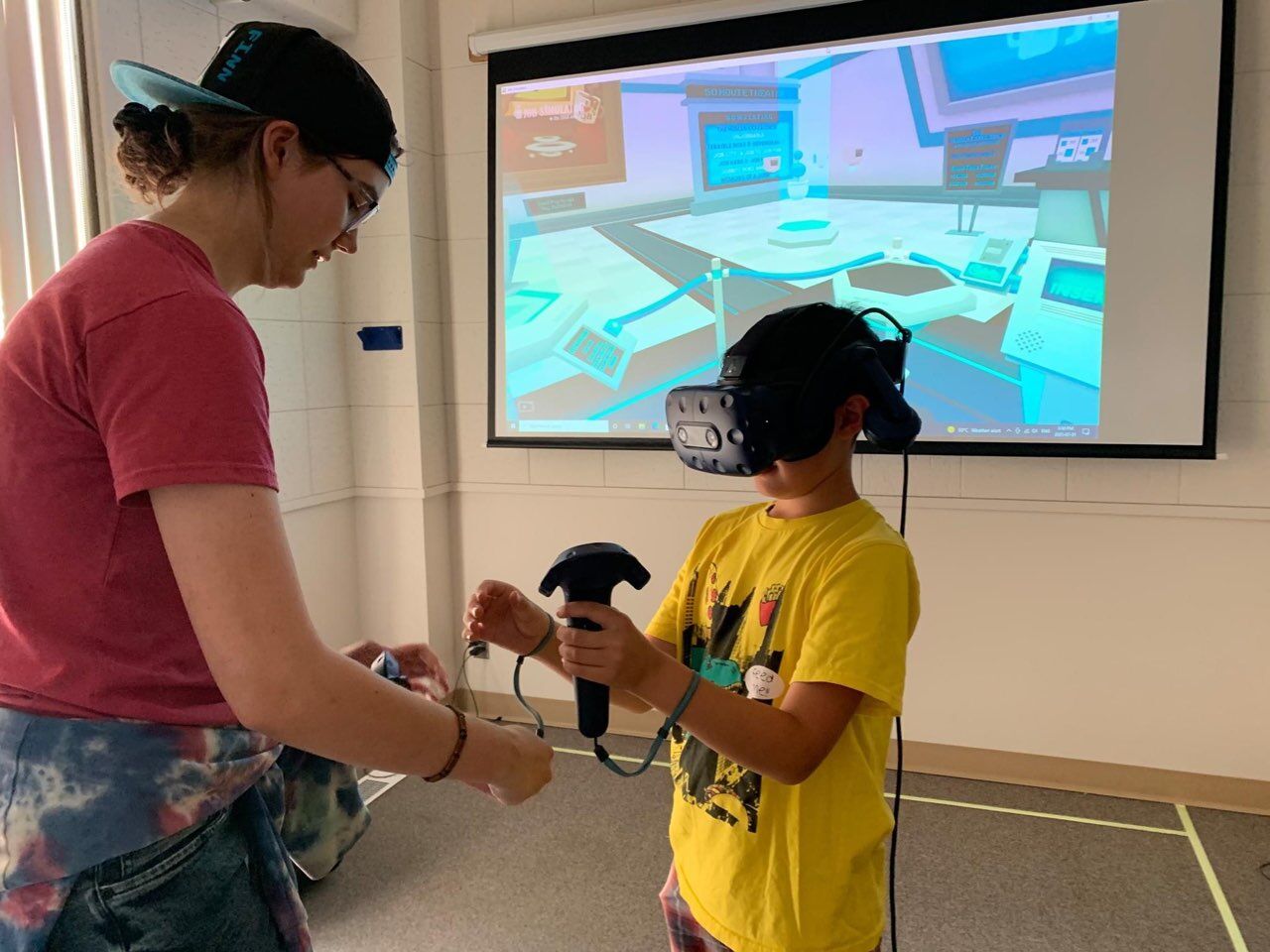 Children participating in programming at the Brooks Makerspace.

As summer programming winds down, the Brooks Makerspace looks forward to offering new and exciting opportunities for youth to explore new skills and interests.

The Makerspace is associated with the SPEC Association for Children and Families, and is a space for youths to be able to connect with their peers and work with a variety of tools, ranging from gaming equipment and 3D Printers to boardgames.

“Our aim is to be a safe after school, kind of summertime during the day drop in center, where kids from all over Brooks and the surrounding counties can come during our open hours. We provide just kind of like a safe environment, to socialize and make friends,” said Ken Shields, Program Coordinator for the Makerspace. “We have a lot of technology stuff here. So we’ve got two computer labs, we’ve got a flex space with a Nintendo Switch and lots of board games in it, we have a virtual reality room, which is very popular. And so kids can come here and experience VR for the first time, and then we also hold workshops. We have a sewing workshop that goes on periodically, every month or two months. We have a volunteer who runs that for us once a week when she does it over a four week period of time. And then we’re hoping to bring more programming in the fall such as a soldering workshop.”

While kids active in sports have ample opportunity to connect with their peers, the Makerspace hopes to offer the same chance to kids with creative or technology based interests.

“A lot of kids are going to be spending time, especially over the summer nowadays, in their parents’ basements, not really getting out into the community. So here, we offer a lot of those same things that kids would like to do, but instead of being at home by themselves, we are kind of letting them broaden their social horizons a little bit. You know, give them something that they want to do, but also then like, giving them access to programming that they might not have thought of trying out before,” said Shields.

“When the Makerspace first started in 2017, the idea was that it would be kind of like an entrepreneurial hub, where kids could learn business plans and kind of to break into, like, tech industries and all of that,” said Amanda Goodnough, Executive Director of SPEC. “Over the course of its life here, we’ve had some elements of that. We’re also looking into the future to be able to bring back some kind of career planning, expose the students to what kind of careers there are in tech that they might not be aware of. Because so many jobs are being invented, even as we speak now. So to be able to connect them to those resources that especially being in a rural area, they may not have access to or any knowledge about. We’re definitely kind of working to kind of go back in that direction. But for right now, just helping kids, especially after COVID, just reconnecting socially, meeting other other youth that have shared interests, and being able to socialize doing something that they like. So it’s different for kids that play sports, can go and play sports and meet friends that way. But if you’re into tech, or you’re into gaming, it tends to be very isolating.”

Alongside the entrepreneurial aspect, the Makerspace was primarily just a drop-in center with no formal programming for the first three years of it’s life, before it was closed due to COVID, said Goodnough. Now that it’s re-opened, largely with all new staff and leadership, they hope to maintain this aspect for kids with nowhere to be in the evenings or want to be around those with like interests, as well as introduce more programming as time goes on.

“The community has been amazing in terms of donations and support. It’s just a matter of connecting with volunteers that want to come in and just be able to kind of share some of those skills with you that are coming in. It is really kind of this work in progress that, I think that’s going to be the nature of it, and even a year down the road, that’ll be the nature of it, because we’re looking at who we have, what skills they bring, and then what they can do. As that evolves, we’ll be able to offer different things. We’re pretty excited about it,” said Goodnough.

Children participating in programming at the Brooks Makerspace.