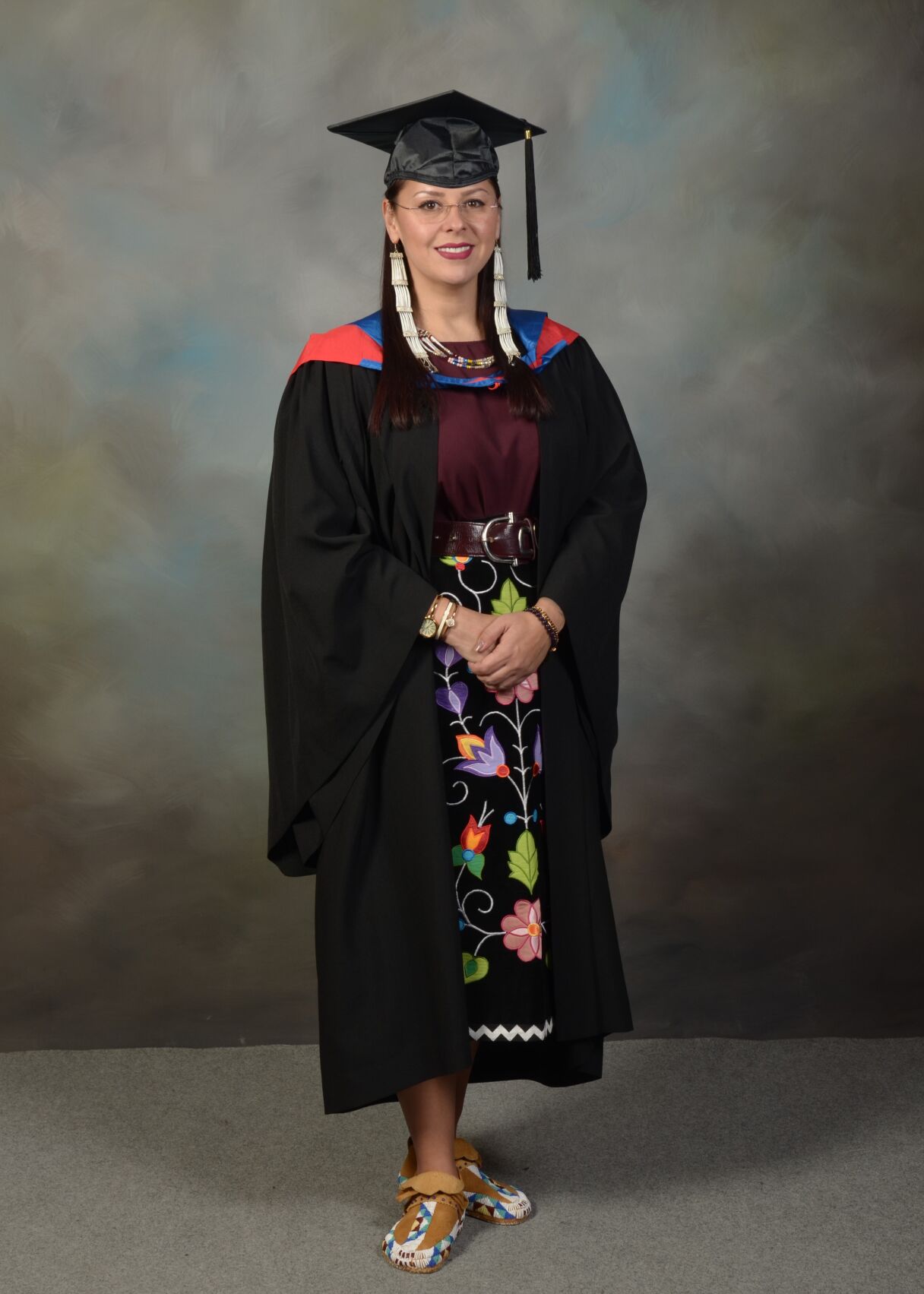 Farica Prince when she received her Bachelor of Police from Charles Sturt University (2019) in Australia.

Blood Tribe Police inspector Farica Prince was busy May 5 as she was tied up with meetings â€” virtual and other wise â€” and she was down at one of the local golf courses and saw all of the red dress hanging everywhere and she was emotional about it as a special tragically horrific day was being marked.

May 5 was National Day of Awareness of Missing and Murdered Indigenous Women and Girls (MMIWG) in Canada and as an indigenous woman, yet a high-ranking police officer, it was a day of extreme emotions and although they were mixed, there was no doubt what Prince was feeling.

“As a police officer, it is heartbreaking that our institute has had such an impact on seeing indigenous murdered women and failing to investigate and failing to take serious and basically has caused this crisis. I know things are getting better in terms of police responseâ€¦as an indigenous woman it is still very much an issue to not feel safe. The education and awareness that has increased around the statistics and the stories like Tina Fountaine (Aug.17, 2014, the body of fifteen-year old was found in Winnipeg’s Red River) ended up being one of the very horrific MMWIG stories where multiple institutes failed her resulting her being found in the Red River and her killer never being charged. It is super difficult and very emotional.”

A lot of awareness about systematic racism has been discussed and while it has been acknowledged and she discussion has been done to curtail direct roadblock indigenous people face or ways the current system fails them, racism still prevails.

While it seems a mystery for some where racism stemmed from, Prince says many indigenous know all too well the source.

“It seems elementary to me, but that’s because I live it. Indigenous people, we have grown up in a society that tell us our lives, our contributions are existence is not as valuable as non-indigenous people. If we grew up in that society telling us that so did everybody else,” explains Prince. “Canadians are conditioned to not care as much about indigenous people, it is not to say all Canadians are racist, that is just how we grew up. It is in all of our institutions, education, health care, media, police, justice. Let’s look at the child welfare system. How do we make up 4 per cent of the population but 82 per cent of children in care? And how are indigenous women the fastest-growing population in Canadian jails when we make up 4.5 per cent of the population? I don’t understand that. I don’t understand how people don’t have a problem with that.

It is exactly because our existence, our contributions and our lives are not as valuable.”

She says for anyone non-indigenous to understand, we have to go back 500 years, where indigenous was only 500 years into contact with Europeans.

“Everything we are experiencing in the society we are in right now, are the symptoms of the trauma from the last 500 years of colonization. So, in the institutions, if we are not focused on the trauma-informed service delivery, we are not healing as a nation, so when we look at public safety, as a shared community responsibility it absolutely has to be trauma- informed service delivery all around,” she explains. “Colonization did us dirty and we are all suffering from it now. Of course generation by generation, our resilience is improving, our growth and understanding as a nation is getting stronger. It is that identity of belonging because that was stripped away, that identity, that belonging, that pride was stripped away. So for people to not understand why it is difficult for some, either communities or people to come out the other side of addictions, homelessness or poverty, that’s the ignorance of not understanding of what has been gone for the last 500 years.”

The problem lies partially in education where “we are not even teaching this stuff in our schools” and she opines “how do we even expect them to understand and be compassionate and contribute or advocate for, as an adult when they are not even being taught the truth in school. It’s huge.” Prince says it’s going to take a lot of system changes in so many different areas, by so many different people. She believes that being 4.5 per cent of the population, indigenous people aren’t going to be the ones to do it alone nor are marginalized people going to be the ones to overcome the inequalities, injustice, the hatred and roadblocks in their collective path.

Multiple generations after the original settlers came created ripple affects based in trauma. The traumatic symptoms appear as poverty, addiction and mental health. Those kind of conditions, those are just symptoms.

“When we look at different programs in the community, Blood Tribe has been so forward thinking in their response to the opioid crisis. I am super proud to be part of an organization that is able to contribute to that forward thinking response. They are focusing on harm reduction, health and wellness, and healing. I think that is the way of the future. I think we know and it is obvious that incarceration does not cure poverty, incarceration does not cure mental health, addictions; does not heal trauma. Period.

“I think we’re taking steps and think conditions are improving with diversionary programs and a focus on community wellness, at least here anyways for sure.

She says 20 years into my career, she remembers occasions where she heard about competitions on how many people could be charged or how many tickets officer could writeâ€¦ ‘Well I charged people the most people this month so I win’.

“I didn’t realize at the time but looking back but I realize how horrible of an approach to public safety that is and how much harm that could do to a community,” she says. “I can only speak for the Blood Tribe Police and now the conversation has completely changed to talking about the new and different ways that things are are investigated  to resolve situations or new background service delivery approaches. We have a core group or have this task force. And they are really representatives that can target issue or target  peopleâ€¦how can we help this person in this situation? This situation needs help. How can we help that situation?

She says collaborative efforts work much better than departments blaming each other’s short comings or the would have, should have or could have scenarios. She says that is better.

For the Blood Tribe Police service, this community based policing is critical and vital for not only upholding the law but being a strong support and educational system within the large region the police there cover.

“I talk about the delicate dance we have to do between of being a representative of the crown and being a community- driven, community-engaged police service and public service.,” she explains. “As we increase our belonging to our communities our cultures, our subculture or whatever we find our belonging in, and as we become more solid in our identity in who we are, where we came from and developing that pride and that’s healing.

“As for healing we are also recognizing that ‘hey, this isn’t working for us.’ Us, as a police service, I know we have said,  “this isn’t working for us and yes there are rules and standards and guidelines that we have to abide by. But, we have all of this area to make decisions that are best for our employees, that are best for the community we serve. Let’s use that for what we can, to change the way we do things so it is beneficial for us and that it is working for us, instead of working against us.”

Farica Prince when she received her Bachelor of Police from Charles Sturt University (2019) in Australia.