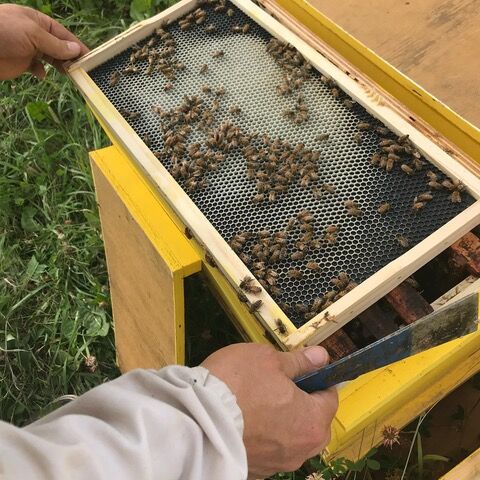 <p>From one of the hives a frame with some of the bees on it.</p>
Recent Posts
Recent Comments

Besides making a lot of the natural honey home-based products such as soaps, cosmetics and spreads, Sehn is constantly marketing, shipping and finding new customers all over the world for the business.

While highly visible, Sehn will be the first to tell you it is a two-person effort and her partner Sheldon Hill is the beekeeper for the operation. A high demanding job, it is far more physically and mentally demanding than one would expect.

It surprised even him. Having been raised and of course working on a mixed grain farm, Hill was not expecting it to be as difficult as it is. For example, he did not know it was going to be as hot as it was.

“I grew up on a farm and I thought I knew what it was like to work hard,” explains Hill.  “Honestly, this job is not for everybody. It is mentally very toughâ€¦it pushes you to your physical limitations”, (it is) ,”too much for some people. â€¦it is so hot., it is like running a marathon. I don’t know how to describe it. It really pushes you physically and mentally. It sees what you are made of. I kinda like that challenge of it (now). At first, it was terrible.”

Sweet Pure Honey has their hives based in Porcupine Plain Sask, which is about an eight-hour journey from their home base in Medicine Hat. Hill indicates has approximately 400 hives which fluctuates depending on the year.

Hill explains they produce about 200-250 lbs per hive during the season, so typically Hill is looking at 80,000-100,000 lbs of just the honey itself. The box weighs 20-22 lbs so besides a lot of the technical work, the physical labour is demanding.

“So (in the summer) you are lifting about thousands of pounds every day around by hand with a suit on, in the hottest part of the day,” adds Hill. “If the weather is good, you need to be bringing in honey.Like the old saying goes,’ Make hay when the sun is shining'”. You get that odd day where it is rainy and so it is kind of a break so it’s nice. Because you just going so hard for so long.”

The season is coming fast for Hill. It all starts in March is when there is an examination of the hives and treat for Varroa mites, make sure they still have enough food. He says this progresses and continues into April. You keep checking to make sure your hives have enough feed and maybe put on a pollen patties. He will generally be unwrapping hives in early May and replacing any needed hives for the new season.

This continues of ensuring of food, checking the bees’ health, raising Queen cells and nucleus colonies to make up any winter loss.

“With bees the real struggle is trying to keep your honey producing numbers up. This is your greatest challenge,” explains Hill. “It proved even more challenging with flight restrictions last spring from places like New Zealand and Chile where some of the replacement hives come from to cover winter losses. I am not sure of the actual numbers, but just in Saskatchewan It would be tens of thousands of packages that were expected by beekeepers to cover their losses that didn’t arrive because of the lockdowns.

“Last spring was very cold and damaging to bees across most of the prairies, the hives just couldn’t get a break, they couldn’t fly, they couldn’t get some pollen and get that queen laying , as a result when the weather finally did change we had more hives that made it through winter and died in the spring because of the cold weather, and if they didn’t die they were small and weak. Being smaller and weaker, this hurts their ability to collect nectar later on, you need lots of bees to produce honey and If you don’t that affects yield.”

The payoff is when there’s honey to be harvested, something he describes as flow. Honey flow usually starts about in the second week of July for them. From that point they are harvesting and extracting the honey from the honeycomb.

“You’re working heavy hard pace. When you’re harvesting honey, lot of moving hive around chasing source your moving hives there is lots of many less glamorous jobs that have to get done. It adds up to a lot of long physically demanding days, a lot of the jobs are still done by hand. Those days are quite hot, quite long. It’s heavy,” explains Hill of his summers. “You’re pushing yourself to the physical limits.

“I drink as much as a gallon of water a day. I will do nothing but sweat that out all day, that is how much I am sweating all day. I am literally soaked from top to bottom in sweat. You know when you can feel the sweat running down your calves, it’s a hot day out there. Even the people who want to come and work and you try to explain to them what their job will entail like maybe little things that they need to worry about â€” like hydration obviously is a big one. Eating well and getting enough sleep is important.”

In each of the hives, consists of nine frames in each box, a good hive will have 5 or 6 boxes of honey each . You get the bees off the honeycombs by encouraging them to move down to the bottom of the hive. You take all of the honey boxes off and replace them with empty boxes. Take the full boxes back to the warehouse to be extracted. To extract the honey, the frames are run through an uncapper to take the thin layer of was off the top of the honey than ran through a large cylinder-shaped extractor. It is spun in circular fashion at high speed and centrifugal force spin the honey out of the frames. The honey comes out the extractor and is pumped to a storage tank and then run into 45 gallon drums for storage, ready for shipping.

Harvest continues until about the last week in August where they start to getting the hives ready for winter. There are disease treatments, picking out hives that won’t make the winter and feeding them enough to make it through the long winter ahead. In late September they wrap them up and by mid October they are finished.

“Most people don’t know a whole lot about it, (beekeeping); it is not a very common business,” explains Hill. He says the public doesn’t understand or have been exposed to the industry. “I don’t think they understand much about bees. It is hard to describe the process unless you have gone through it. I have done a lot of jobs in my life, liked worked in the oil patch. I’ve done a lot of physical jobs. I have worked with a company where I dug ditches by hand for 10 hours a day replacing gas lines in old natural gas facilities and had to dig these by hand. Even that, it pales in comparison to this job.”

Dealing with the heat can be challenging,” Hills says it pushing the workers so physically hard that some people just break.” The suit consist of coveralls with a protective hood is over your head. All that heat is being trapped within the suit, restricting how much air flow one can breathe in. If you are nervous about bees it makes it much more stressful.

“You are getting stung. You’re in the suits and it might be 30 degrees outside and inside your suit it more like 40 degrees and it just pushes you to the limit of heat exhaustion,” adds Hill. “It’s like someone who challenges themselves to their physical limits that’s sort of where we are at, that’s sometimes too much for some people.”

They have a wide range of products besides the raw honey with bath and body (soap, lip balm, scent sticks) and other beeswax products like candles.

Hills worked in the oil patch during the bee offseason, but this winter was laid off. A lot of effort is put into the online store.

It has been a struggle for Hill and his wife Stella Sehn regarding their honey business.  “The last couple of years has been really bad for some people in our industry in western Canada. Personally, two years ago we had the smallest crop I have seen in the 25 years of beekeeping. Last year’s crop in 2020 was smaller yet,” explains Hill. “This year the price increased, but only because honey production was so dismal in almost all of western Canada. The previous four years the price of honey barely covered costs. This is the pressure I have been under for the last five years.”

Hill add it is comparable to any pressure any commodity producer has. “I don’t know if it’s worse now or not.  I think that If you grew up on a grain farm that mental factor is always present and always has been apart of the farming business. I think you are always under some type of stress, things you just can’t control whether it be bad weather or something like that. You are really putting yourself out there. Both physically and monetarily, you are exposing yourself. You are really throwing the dice and hoping it’s going to work out. The amount of money that you put into inputs whether it be grain farming, (apiaries) on a hope and prayer It’s a stressful environment.”

Throw in bee disease concerns and long, cold springs and you have a recipe for tough years. Any stress to the bees will cause their demise.

“You have a general idea from years past (how it will go), but you won’t real know until you open them up in spring and you see how they overwinteredâ€¦ You do what you can to keep your numbers up. We are honey producers so there is a line thereâ€¦ It kind of fluctuates up and down.”

It is a mentally exhausting industry both from the actual work to the concern of whether or not they can survive from a financial viability standpoint.

There is open discussion about saving small businesses, Sehn describe how they have to save the bee farm. It was a mental strain on both of them. Hill has gone to writing a blog on the Sweet Pure Honey website discussing mental health challenges and thoughts of suicide. Sehn says they are doing everything they can to save their family bee farm.

Sehn points to a big part Hill’s mental decline was due to financial stress over the past four years. The petroleum sector’s crash forced Hill out of his offseason job which helped pay a lot of the bee farm’s costs.

“We have always worked hard and just need to be paid fairly for our crop to move forward,” explains Sehn.

From one of the hives a frame with some of the bees on it.