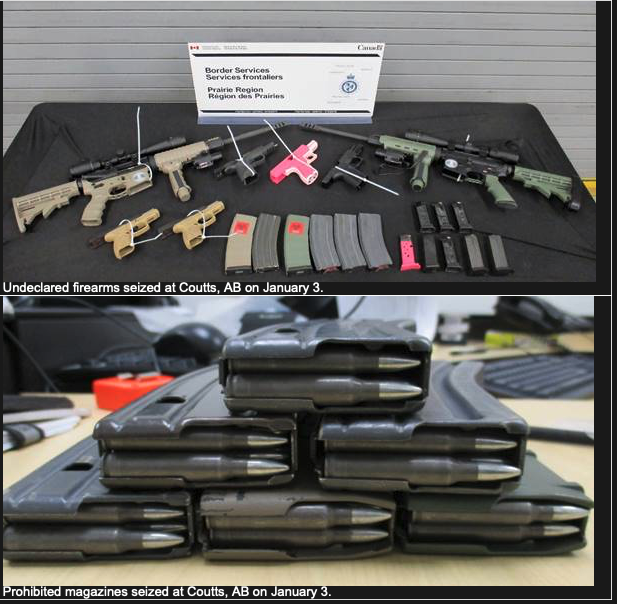 The Canada Border Services Agency (CBSA) continues to protect Canadians by preventing undeclared and prohibited firearms from entering the country. The interdiction of illicitly imported firearms, firearms parts, and weapons is a CBSA enforcement priority.

The Agency announced today that it has laid charges in a significant firearms seizure at the Coutts port of entry in southern Alberta.

On January 3, two United States residents sought to enter Canada in a motorhome and were referred for further examination. Border services officers searched the vehicle and located the following firearms, which the CBSA alleges the travellers did not declare:

CBSA officers seized the firearms along with 11 prohibited high-capacity magazines. Firearms that are not properly declared may be seized by the CBSA, as well as the vehicles used to carry them. In addition, the CBSA may launch criminal proceedings against travellers who violate border laws. A court conviction can result in fines, jail time, and impact a foreign national’s ability to return to Canada in the future.

The CBSA Criminal Investigations Section has since charged Adam Peter Brown (39) and Bethany Ann Brown (42), both from Alaska, on five counts each:

·smuggling, contrary to Section 159 of the Customs Act

·making false statements, contrary to Section 153(a) of the Customs Act

·possessing a prohibited or restricted gun with ammunition, contrary to Section 95(1) of the Criminal Code

·failing to follow firearms storage regulations, contrary to Section 86(2) of the Criminal Code

·unauthorized possession of a firearm, contrary to Section 91(1) of the Criminal Code

The accused are presumed innocent until proven guilty. They were released on a promise to appear and are scheduled to make their first appearance in Lethbridge Provincial Court on March 1, at 9 a.m. MST.

“Canada Border Services Agency officers remain on alert to seize smuggled firearms at the border. This is a top priority for the Agency and an important way we contribute to Canada’s public safety, protecting the communities we serve,” explained Ben Tame, Director, CBSA operations in southern Alberta.

·CBSA officers are Canada’s first line of defence, screening goods coming into Canada and examining more closely those that may pose a threat.

·Canadian firearms laws changed in 2020. More than 1,500 models and variants of assault-style firearms have been classified as prohibited.

·It is a traveller’s responsibility to learn about the rules to import a firearm or weapon into Canada.