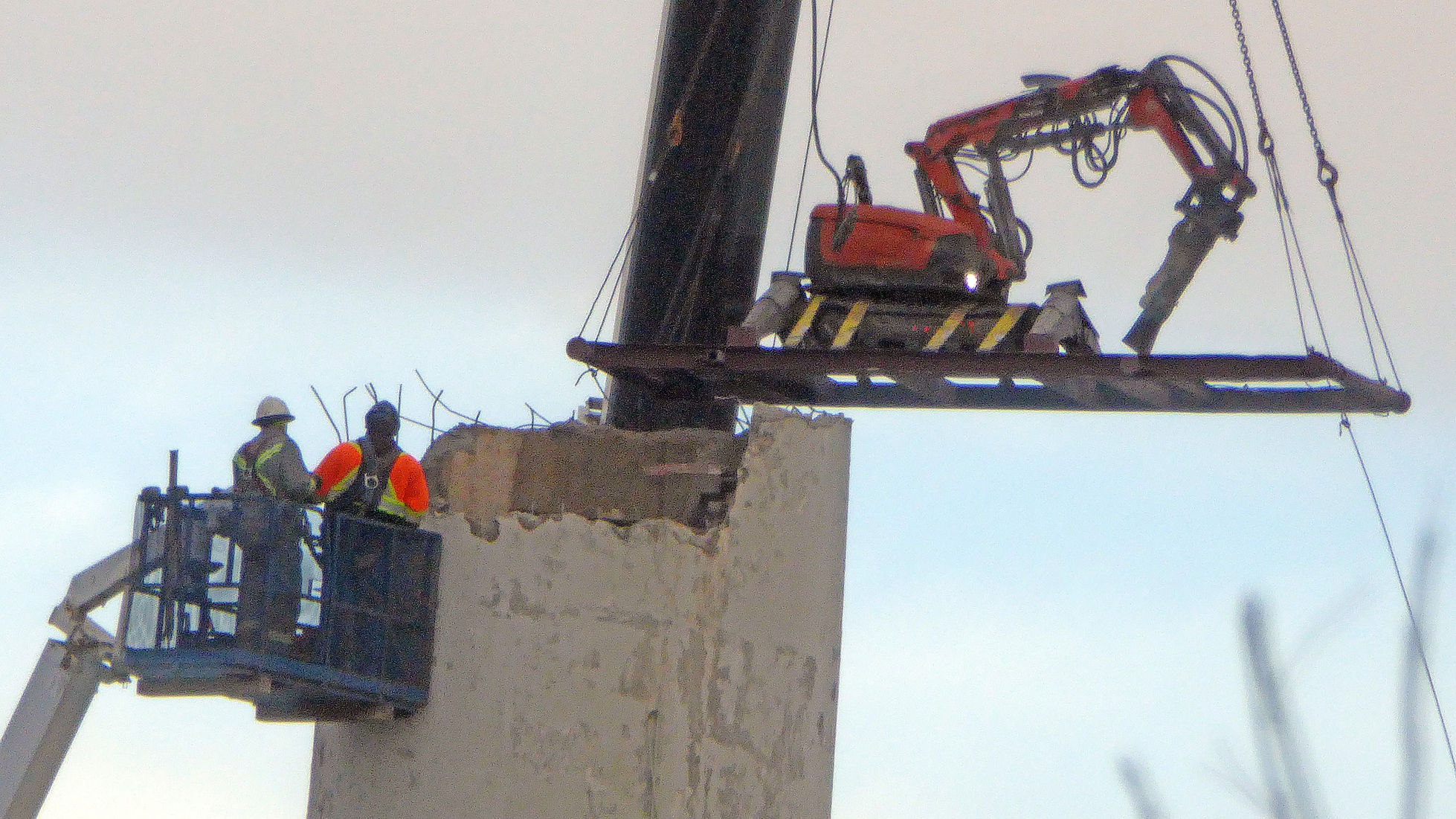 For more than one hundred years, the twin smokestacks on the northern boundary of the town of Redcliff in southeastern Alberta, have stood watch over the residents of this small town. Now when they look to the horizon, Redcliffians will see only one tower defining the skyline.

One day this fall, while my husband and I were having our morning coffee and gazing out the living room window, we noticed two giant cranes being erected alongside one of the older smokestacks. One crane had a personnel bucket at the top in which two people were supervising the demolition of one of the smokestacks, which have pointed skyward since the beginning of the 20th century. The other crane lifted a small backhoe, suspended on a platform, and was operated remotely by the two in the “bucket”. The 185 ft. stack was being dismantled right before our eyes; this controlled demolition was safer compared to toppling the stack in one blow.

The plant with its twin stacks was constructed in 1912 and operated as the Dominion Flint Glass Company until 1976 when the name was changed to Dominion Glass (p. 133, Centennial History Book, Redcliff). Operation of the glass plant continued until 1989.  Redcliff, on the northern banks of the South Saskatchewan River, was chosen as the site for this glass factory because of the availability of silica sand, natural gas, and the donation of the site.

Dominion Glass and its employees share a big part of the history of this town, located at the outskirts of Medicine Hat. Many residents have stories to tell about townspeople and families who worked at the plant and contributed to the growth of this community. People all across Canada may remember glass containers used for preserves at canning time which were made by Dominion Glass right here in Redcliff.

Now owned by CertainTeed (acquired in 2009), a subsidiary of Saint-Gobain, headquartered in Paris, France, the building materials manufacturing plant, in consultation with the Town of Redcliff, has demolished one of the brick and concrete towers. “Our primary concern and responsibility is for the safety of the employees at the plant. Not able to undergo further repairs, we made the decision to replace the stack,” said plant manager, Trevor Koley.

CertainTeed elected to build a new, more efficient stack which was completed in September, 2021. SIFI Engineering has completed the fabrication and installation of the new stack, 100 feet in height, 4 feet in diameter, and made of stainless steel. Able Demolition was responsible for the takedown of the old stack and removal of materials.

Over the past month, we watched as the tower came down slowly from the top. Each day operators would manipulate the backhoe by remote as it chipped away at the tower, allowing the material to freefall into and outside the tower.  “The best course of action was to demolish the old stack from the top down once the new one was in place,” said Koley. “This was completed in 10-foot sections, removing the inner brick lining and thicker, concrete wall, and letting it free fall. We continued this process downwards until the stack was completely removed”.  Koley added, “At this time, CertainTeed has no plans for removing the second smokestack.”

The twin smokestacks have long been a landmark in this area. In an age where people use GPS to get to their destinations, the stacks provided many people with a physical way point on their journey along the Trans-Canada highway. For those of us who live in the vicinity, it was enough to say “we live over by the smokestacks” when giving directions to visitors.

We are experiencing “sympathy pains” over the loss of one of the stacks. The remaining stack looks lonely, but gradually my husband and I are getting used to the idea of morning coffee and a single historic smokestack.