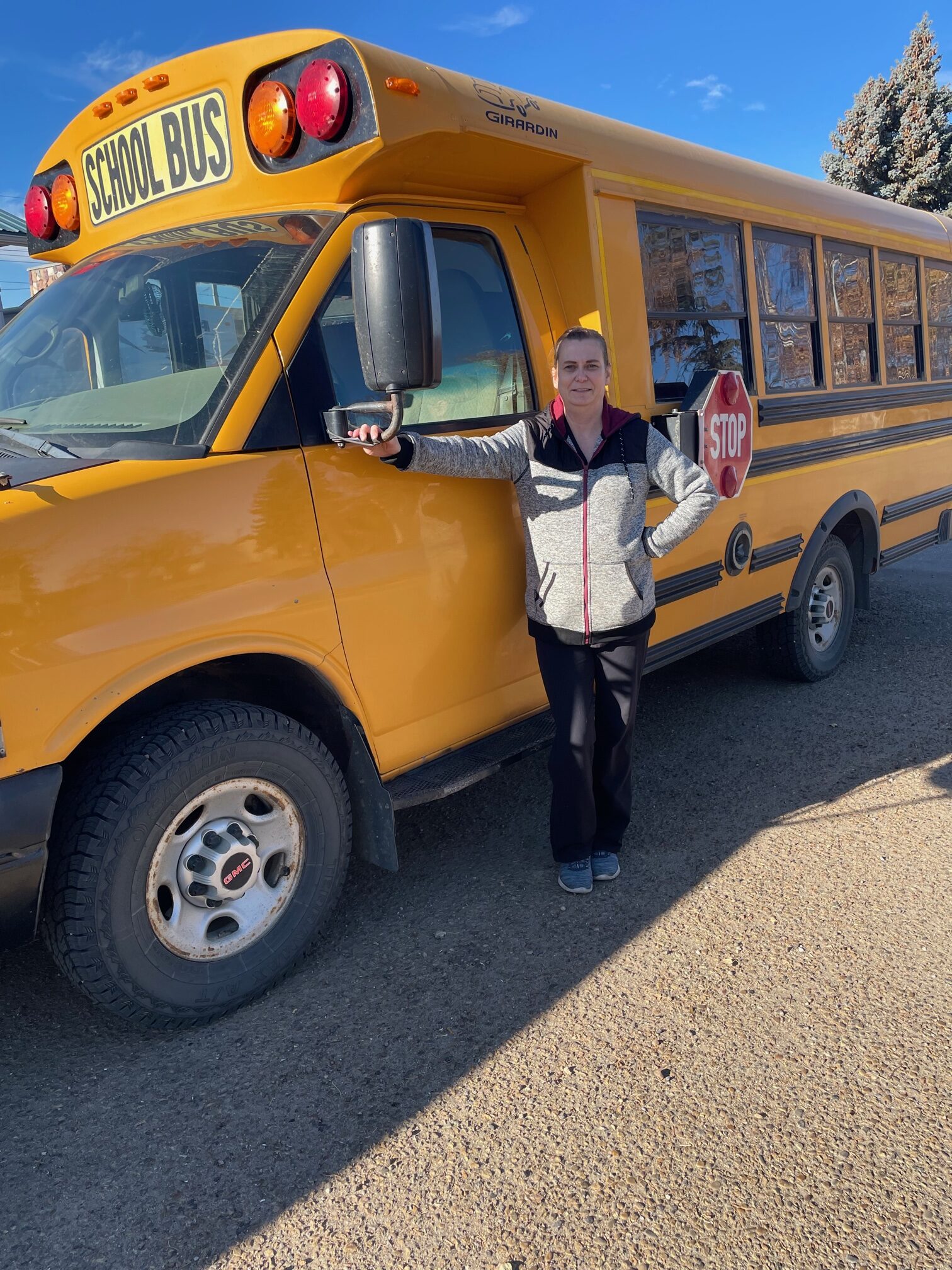 School Bus Contractor Suzanna Santos with her bus. Santos has one of the longest bus routes in the area, with approximately a three hour drive both in the morning and afternoon every schoolday.
Recent Posts
Recent Comments

The rising costs of insurance may result in the loss in school bus routes across Alberta, with new costs being the “straw that breaks the camel’s back” for many small contractors, said Alberta School Bus Contractors Association President Mark Critch.

“It jumped just over a year ago, what we thought was enormous from approximately $1,200, a bus up to $4,300 a bus. That was on November 1 2020,” said Critch.” We spent months trying to find new insurance, other insurance, cheaper insurance for our contractors, for our members. We had very little success, or I should say no success. We have been lobbying the Minister of Education and the Alberta government in general, to try to come up with some answers on this. Very late in the game, the Minister of Finance, came out publicly and said this has been rectified, every contractor will have access to insurance. That was about three days before our renewals came due on November 1, 2021. Nobody mentioned what the price would be and nobody knew until about a day before. We had to actually go live on November 1,  and our new rates for small contractors have jumped to $6,523 a bus. So now in the span of 12 months and a day, we’ve gone from $1200 approximately, to $6,523 a bus. It’s unmanageable for all of our small contractors that are affected.”

While getting an answer for the reason behind the change was a challenge, Critch said, they’ve been told it was due to a year with higher claims than normal, but he expressed confusion at how one year of increased claims could result in an approximately 400% increase.

The change has caused a lot of contractors to have to rely on their school divisions for assistance with insurance, though not at a significant increase that calls into question if they can afford to keep their routes.

“We just found out, I think it was in August, that was right before the school year that we found out that our insurance, our current insurance company would not be able to handle this new policy coming into Prairie Rose, which means that we would have had to get a $5 million liability to drive school bus now. Previously, we’ve always had a $2 million liability,” said Suzanne Santos, a small contractor who runs a route with her husband in and around Oyen. “That was working fine with our insurance company. And our payments were quite reasonable and everything for that insurance. Now, when we were told that we had to get this 5 million I asked Derek at Prairie Rose, I said, Well, how much is that going to cost us per month? And he says, well, it’s going to go up substantially, but through the school division, we can get some kind of insurance going through with us. He says, because a lot of other insurance companies won’t support that $5 million liability. So of course, I got nervous right away, because I’m thinking, well, we’re going to have to cancel our route now because we can’t afford our insurance, or how is this gonna work?”

Santos said she was fortunate to be able to get something set up with Prairie Rose Public Schools, if at a significant cost increase from only $125 a month with her previous insurance company to approximately $600 a month.

While she and her husband are fortunately not in such a dire situation that they’ll need to consider giving up their route yet, she notes they “have their hands tied behind their back” in regards to doing anything about the changes.

“We’re at a loss sometimes. Because yeah, we don’t know why. Why does this keep going up? We’re not in it for the money. Of course, we’re in it, because we enjoy it. But we still need to live off something we need to make an income somehow, right? How much more can we take from the gas or the prices of everything going up? So I don’t know, I would like to see it going back to our regular. I know this probably is not going to happen. But I would like it just to go back to a $2 million liability again and let our insurance companies handle it the way we were doing it before,” said Santos.

Santos’ bus route has her driving for nearly six hours every day, one of the longest routes in the area, with three hour drives both in the morning and afternoon to transport children to school. She remembers a time when the government offered a rebate on gas for school bus contractors to offset the cost of fuelling such large vehicles, though it hasn’t happened in several years, adding the rising cost of fuel to the strain on smaller contractors.

“There’s lots of concern for the ones that are still trying to hang on,” said Critch. “They’re doing everything they can, they’re lobbying their respective school boards to try to get some additional funding. They’re parking their spare buses. Almost every smaller contractor that I’ve spoken to that had spare buses has told me that they will be parking them for the upcoming school year, they can’t afford to keep the insurance on them. So in essence, if they do survive, it’ll be at the cost of service levels. If a bus goes down, which they invariably do, they all break down at some point, they need to come in for service at some point, then there won’t be a bus running in these areas that day or that week, or whatever that looks like. Over the long term, yes, we will be losing many of our smaller contractors in the rural areas. And that will be a bigger problem for years to come. Because when these small contractors get out of the business, they drive the bus that they own, they won’t be going to work for someone else. They will be retiring from the business and we just won’t have buses in these areas to get kids to school.”

Many of these contractors have been working in their communities for years or even generations, said Critch, and have built relationships with their communities that are being lost faster than they should due to these drivers not being able to afford operation. The Alberta School Bus Drivers Association has been lobbying with the Alberta government for emergency funding to try and mitigate the damage done and prevent the loss of transportation for students across the province.

“We don’t ask this lightly. Our members have tried everything to make this work,” said Critch. “As an association, we’ve tried very hard to make this work, we’ve gone out and we we’ve tried to work on the behalf of our members and start our own Insurance Group, and to do what they call a synthetic fleet, so that we can market our insurance requirements out to the market and, and get something at a discount, find something better. We’ve worked hard. We’ve talked to brokers across the country, we’ve done everything. And at this point, we have nothing left to do. So we’re asking the Minister to step up and provide some funds to offset some of this cost. These contractors are needed. They’re valuable cogs in the chain of education, the whole education process, and they shouldn’t be forgotten. And they’ve done great work for years out there getting these kids to school. And I’m afraid they’re being forgotten at this point.”