Wild boar problem has now become a serious issue in Alberta and in Sask. 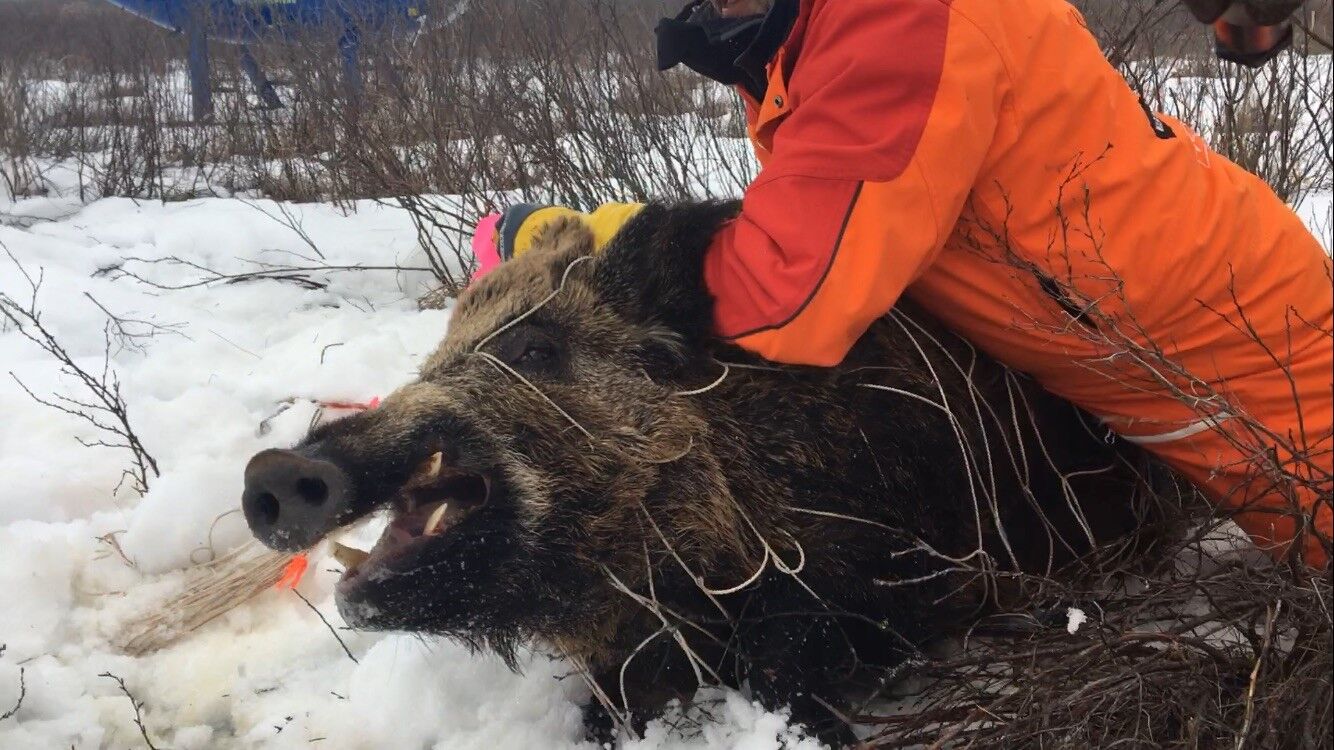 The feral pigs can become quite large and unmanageable.

The dream of Canada being free of invasive wild boars is a thing of the past, said Ryan Brook, Associate Professor at the University of Saskatchewan.

For over 11 years, Brook has been monitoring the population of Canada’s feral swine, and advocating for movement to eradicate them, but says that government response has been too little, and too slow to manage the issue.

“I’ve been asked this questions any, many times over the last, you know, almost 12 years now, can these animals be removed,” said Brook. “What I’ve said for a long time, when I started in 2010, my response then was that, yes, there is a possibility to eradicate them. But that window is closing very rapidly. And I said that in 2010, I said it in 2011. For a number of years, I really stressed that the window is really closing on our ability to eradicate. I said that for probably seven years. Finally it started to get increasingly unlikely that that was going to happen, and, now in 2021, it’s absolutely clear from all of our mapping and analysis that these animals are incredibly widespread.”

While Canada’s wild boar population is not as dense as that of Texas or other places in the United States, the animals do boast the possibility of having approximately 12 young a year. These piglets have a high survival rate due to a lack of predators on the prairie provinces, which is where a majority of the wild boars reside.

“While there is absolutely no hope of eradicating wild pigs from Canada, I can say that there are possibilities of having places that remain wild pig free or could be made pig free and kept that way,” said Brook, citing the lack of wild swine in the Northwest Territories, Yukon, and the small population in British Columbia. “What I believe that should be done in my expert opinion is that I think Canada should be zoned into different areas, and there will be a hot zone that says, Okay, these pigs are here forever. We can control them as much as possible, reduce them as much as possible, work with farmers to put up fences to keep them out of grain piles, and then hay bales and minimize that crop damage, which is always a big concern when it comes to wild pigs. So we can put that effort there, but then there are other areas where you want to eradicate and keep things gone. But of course, to achieve that, we’re going to need major investment, this would be expensive. But it will also in the long run save millions, perhaps even billions of dollars.”

Across the United States, wild pigs cause approximately 2.5 billion dollars in crop damage every year, said Brook. He points out the cost of ignoring these animals is expensive, and will continue to grow every year they are ignored.

“There hasn’t been a really all out effort, Canada-wide, to find and remove them. Now that they have become established and it’s exactly like a forest fire,” said Brook. “Putting out a forest fire that’s the size of your backyard is relatively cheap and relatively easy to get under control. Putting out one that is the size of a city is very, very hard to do and extremely expensive. So every single year, the cost of greatly reducing and eradicating wild pigs in many areas goes up and you know, every few years, you probably have to add another 0 to the end of the cost of removing them from large areas.”

Brook recognizes important work being done in Alberta to minimize the province’s population, mostly with large panel traps, but believes more measures need to be taken to meaningfully remove large numbers of animals.

“Everybody’s really gone all in on these big large panel traps. The provinces that are trapping and removing paints, are as far as I know, Alberta, Saskatchewan and Ontario are the three provinces that are trying it,” said Brook. “Those can be incredibly effective, and you can catch an entire sounder group in one shot and remove 20 animals in one evening, you get them walking in, you hit the button, and that trap catches all of them. So it can be very effective. But the problem is if you look at that map, that means you know, we probably need that You know, two or 3000 of those traps out right now to have any kind of chance of, of a massive reduction, right. That’s great, these panel traps are wonderful. The people on the ground running them are wonderful, there’s a tremendous amount of good work to sort of do that. But this sort of scaling is just not there. Sort of like if the City of Calgary had one fire truck, you would say, wow, that wonderful fire truck could be really good. But it’d be pretty hard to make the case that one is enough for the City of Calgary. So I think we just generally need that much more ramped up across Canada in terms of overall effort.”

Brook makes suggestions of the use of trapping from helicopters and the use of a Judas Pig, which is a wild animal fitted with a GPS collar to hopefully lead researchers and trappers into large population centers called strongholds. In the US, there has also been a large push for an approved poison, but like all methods, Brook notes this would come with a series of problems.

Outside of these panel traps, however, Brook notes an overall lack of interest from provincial government. A majority of Brook’s funding for this research instead comes from the United States Department of Agriculture, which has allowed for all of the maps and other research opportunities in the past 11 years.

“With wild pigs in play, you really, really need a strategy. Trying to do anything without a detailed sort of open strategy that, you know, can be viewed and, and discussed by scientists and the public. Without that, it’s really hard to make a case that you’re taking this very seriously. So that would be I know that Ontario has gone public with their draft management plan, which is great. And so I’ve been very positive to see that coming out,” said Brook. “One of the other indicators that would be to me to say, Okay, are you very serious about this, or not serious is that, and I’ve been saying this for a long, long time, is if there’s sport hunting. If you want lots of pigs on the landscape, you want to spread them far and wide, the best thing you can do to help spread them around, and to build your population is actually to put hunters out there. And because hunters rarely take all of a group, so if there’s 10 people, on average they might get two or three, and  those remaining will become much more while they’ll be more nocturnal. They’ll hide in heavier cover, but they will also be spread across the area.”

One source of hope for Brook and those he works with to monitor these populations is the Feral Swine Transboundary Work Group, which aims to promote better communication between both the provinces and the United States.

“It’s been a huge step, because much like I mentioned that provinces have been largely working on their own for the most part, but that’s changing more and more now, we know that these pigs can cross the Canada US border,” said Brook. “That has really important implications for things like the potential for spread of disease. But also, for example, Montana, which, of course, is straight south of Alberta, and Saskatchewan, they are wild pig free, and they really, really want to stay that way. One of their major concerns, which is justified, is a concern of pigs coming from Alberta, or Saskatchewan down into Montana, and infecting their province. And so that’s a great example where we need to work together.”

The feral pigs can become quite large and unmanageable.