Posted on 22 September 2021 by Matthew Liebenberg 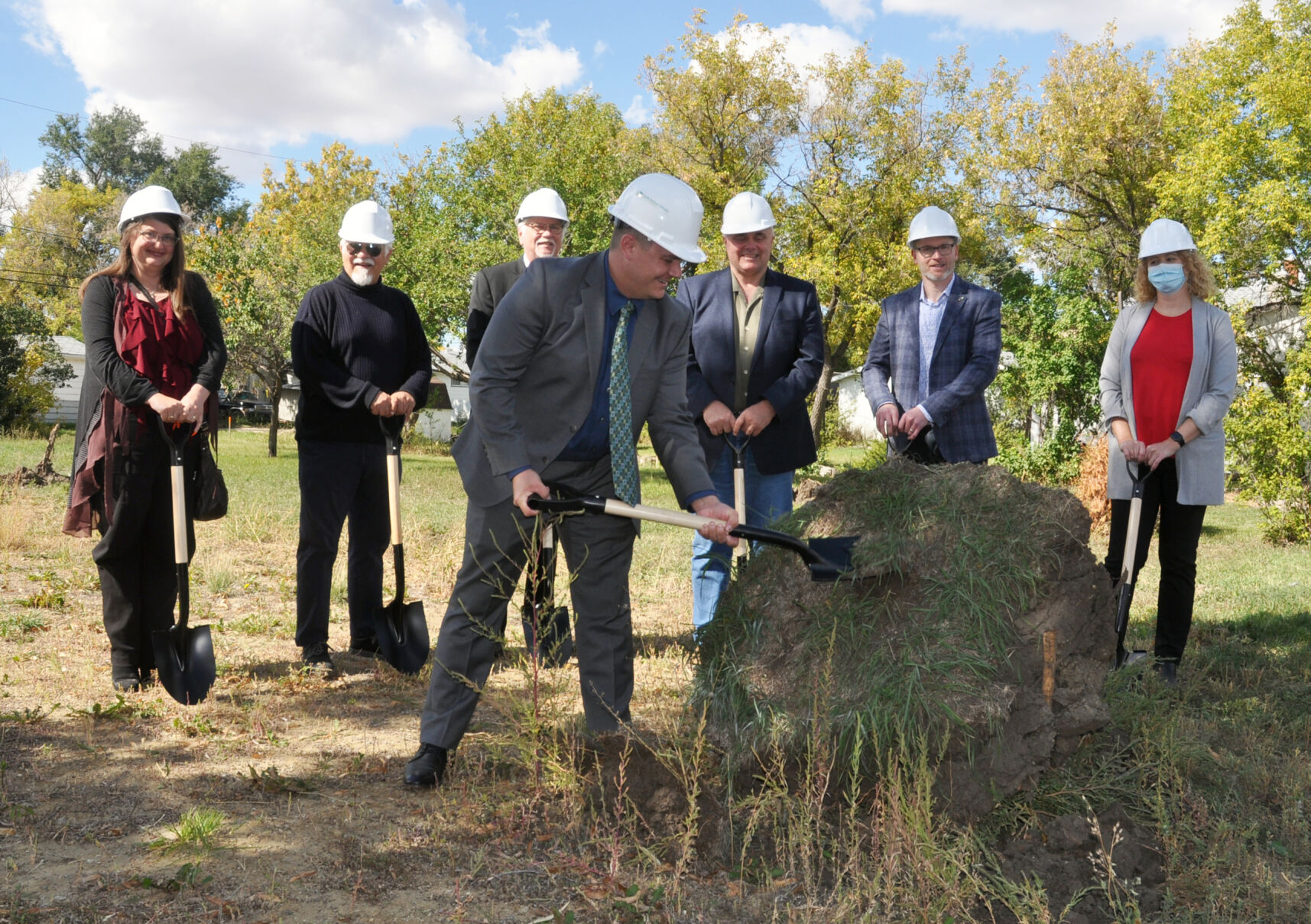 The dream of a new building for the Canadian Mental Health Association (CMHA) Swift Current branch came an important step closer to reality with a sod-turning ceremony, Sept. 13.

CMHA Swift Current staff and board members were joined by dignitaries and other guests for the ceremony on the site along 5th Avenue NE, where the modern building of around 5,000 square feet will be constructed.

Site levelling was already scheduled to start two days after the sod-turning ceremony. It is the realization of a long-held vision by the organization. CMHA Swift Current Board Chair Don Robinson noted the idea for this project started about 10 years ago.

“This is an exciting day for us to be here for this sod turning,” he said. “Our building, the present one, has sort of outlived its usefulness. It’s been there a long time and our members that use the building deserve something better.”

This piece of vacant land was purchased about a year ago. The 100-foot lot is ideal for their needs and the intention to have a large building on a single level.

The amount of funds raised made it possible for CMHA Swift Current to issue a request for proposals to four local contractors earlier this year in the spring. The successful contractor for this project is Bridal Builders Inc.

“Our board early on was adamant that the successful contractor was going to be somebody that’s local,” Robinson said. “It’s been the local people that have supported us all along and we felt that it was important to support the local businesses as well. And on top of that we insisted that the successful bidding contractor also used subtrades that were local.”

He expressed appreciation towards the community for supporting the fundraising campaign for this project.

“We are so thankful to the community,” he said. “It’s such a giving community. They always step up and they made today possible.”

CMHA Swift Current Executive Director Todd Vallee also referred to the support from the community that made it possible to have a sod-turning ceremony, varying from contributions by individuals and small businesses to some major donations.

“We’ve had numerous people, businesses and organizations come on board with significant contributions, leading us to this day where we get to break ground on our new facility,” he said.

The spark for this fundraising campaign was a large donation from the Durward Seafoot estate a few years ago of over $400,000. The campaign received another boost in 2018 when CMHA Swift Current won the grand prize in iA Financial Group’s second annual Canada-wide philanthropic contest. A more recent donation of $200,000 by the provincial government made it possible to proceed with planning for construction of the new building.

According to Vallee there is a sense of anticipation among CMHA staff and members for the future as construction is set to get underway on the new building.

The larger size of the new building will not only provide more room for activities and programs, but the single level will improve accessibility for members.

Several dignitaries spoke during the sod-turning ceremony to bring greetings and to congratulate CMHA Swift Current on this important step.

Mental Health and Addictions, Seniors and Rural and Remote Health Minister and Swift Current MLA Everett Hindley expressed appreciation towards all individuals and organizations that supported the fundraising campaign for the new building. He referred to the importance of this project to the community.

“There’s been increased focus on mental health and addictions over the past number of years, and ending the stigma that goes with that and providing the supports and services that go along with helping people with those challenges,” he said. “We all need to work together. I’ve spoken of the great work that’s been done by the CMHA branch here in Swift Current and across this province, and what they’ve done during COVID to provide supports and even before that and I know will be able to do so afterwards. For that I just want to say thank you once again for everyone for your contributions.”

Patti Dekowny spoke on behalf of Mental Health and Addictions Services at the Saskatchewan Health Authority.

“We’re really looking forward to the upgrades that this facility will provide and better meeting the needs of the participants within the CMHA, and we’re really excited about the new location and what the new building will bring,” she said.

Rackow expressed excitement about the benefits of the new building for the various activities of the CMHA Swift Current branch.

“Whenever I’ve come to Swift Current it has always struck me how the staff are all so very welcoming and generous with their time and their efforts, and how very creative they are with programming,” she said. “It will be amazing to see a building that can hold all that creativity and make those things happen. So congratulations. I think that’s very good work, and looking forward to what it looks like afterwards too.”

CMHA Swift Current will continue with fundraising to secure funds for interior detailing and the finishing touches to the new building.

“We do have enough to do the building itself,” Vallee said. “There are some wants that are borderline needs. Things that would very much help our organization in day-to-day operations, make things easier for the members as well as the staff.”

He announced that CMHA Swift Current will be offering businesses and individuals the opportunity to leave a legacy within the walls of the new building.

“Our donor legacy wall will enshrine donors to ensure their efforts are remembered for years to come,” he said. “The wall is going to be showcased in a high traffic area and will feature recognitions for donors in categories from $25,000 and up, $10,000 and up, $5,000 and up, and even $500 and up. Donations can be made in person as well as on our website.”

Donations can be made through the CMHA Swift Current website (swiftcurrent.cmha.ca). For more information about the donor legacy wall, contact Vallee by phone at 306-778-2440 or send an e-mail to: directorsc@sasktel.net