Posted on 17 September 2021 by Matthew Liebenberg 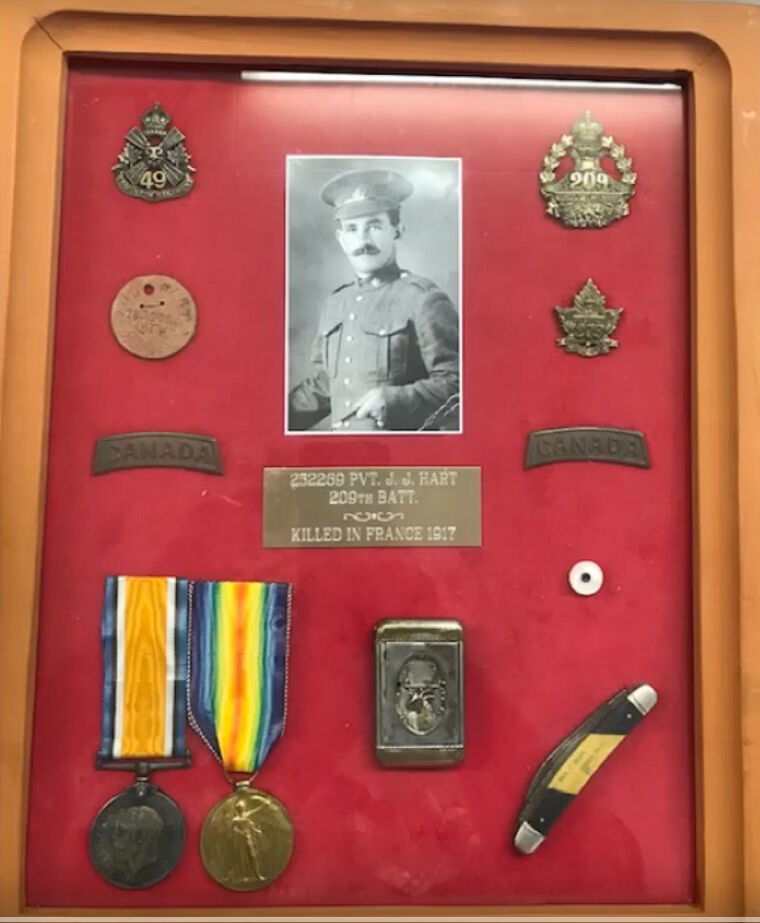 Private John James Hart of Cantuar was featured during the first week of the Veteran of the Week program. He was killed in action during the First World War.

The personal stories of veterans can be a meaningful way to remember and honour the contributions of those who served their country.

The Royal Canadian Legion Branch No. 56 in Swift Current has started a new project to honour veterans in the weeks leading up to Remembrance Day.

The Veteran of the Week program started in the first week of August and will continue until Remembrance Day. It will feature the stories of 14 different veterans.

Each week the story of a veteran is presented in a video posted on the Swift Current Legion branch Facebook page and YouTube account. A written document about each veteran with the same information is also posted on the branch website (see branch projects under the About Us tab).

Swift Current Legion member John Griffin is the coordinator of the new Veteran of the Week program.

“The idea behind the Veteran of the Week program is derived from what the Swift Current Museum has been doing the last few years with the banners that they put up leading up to Remembrance Day,” he said. “I got the idea from that and I thought people do enjoy seeing these banners, and maybe they would enjoy seeing something that had a little more information on people who served that were from the local area.”

He believes it is important to share these personal stories of veterans to create awareness about the significance of remembrance.

“When it comes to remembrance, I think it’s those personal stories that really bring it alive,” he said. “You can read about things in a history book or a text book or learn about it in school, but when you hear the man who lived down the street from you served in the Second World War, it really brings the remembrance alive to learn about who these soldiers were as people.”

“The response has been fairly good,” he said. “We’re up to week five now and it’s been a mix of people submitting veterans as well as some from research that I’ve done for the Legion as well.”

“We’re trying to keep it within the province,” he said. “The goal behind this is to highlight local and Saskatchewan veterans.”

Veterans can make submissions about their own service, or it can be submitted by a parent, a relative, or a descendant. The program will feature veterans from all branches of service and from all time periods, as well as those still serving.

People are requested to provide as much information as possible about a veteran. They are welcome to submit their own write-up or otherwise Griffin will use the information provided to prepare the text for the weekly feature.

“We’re asking for at least one photo, if possible,” he said. “Sometimes people don’t have a photo of a veteran, but if they could send a photo or a couple of photos, something like that really brings it together.”

If no photo is available of a veteran, then an image of a cap badge or a unit patch can be submitted for use with the text.

The veterans featured during the initial five weeks of the program served in different roles and military branches.

The veteran featured during the first week was Private John James Hart of Cantuar, who served with the 209th Swift Current Battalion and 49th Battalion (Alberta Regiment) during the First World War. He was killed in action at Passchendaele on Oct. 30, 1917.

Private Donald Grant from Swift Current was featured in the second week. He served in the First World War with the 209th Swift Current Battalion and 102nd Battalion (North British Columbians).

Retired Master Cpl. Calvin McCrie of Swift Current was featured in the third week. He served in the Canadian Air Force from September 2005 to July 2020. He was a helicopter mechanic, and he was deployed overseas to Afghanistan and Iraq.

The fourth week of the program featured Private William Cooney of Glen Ewen, who served in the First World War with the 5th Battalion (Saskatchewan Regiment). He was killed in action on Nov. 10, 1917 during the Battle of Passchendaele.

The featured veteran during week five was Lt.-Col. Percy John Philpott of Rouleau, a decorated officer who served in both world wars. He was wounded three times during the First World War and his decorations include medals for gallantry and devotion to duty.

Families who submitted information about veterans have expressed appreciation towards Griffin about this initiative by the Swift Current Legion.

“I’ve heard back from a couple of the families who submitted stuff to this program, and the response has been very positive,” he said. “They’re very happy that their veterans and loved ones are being honoured in this way. â€¦ So I’m very happy with that, and that’s the goal. It’s to honour these veterans and share their stories. So when the families are incredibly happy with it, that makes me very happy.”

The intention is to present the Veteran of the Week program annually in the run-up to Remembrance Day. People can therefore continue to make submissions, because it will be used in the future. He hopes the program will also help to raise awareness in the community about the activities of the Legion.

Private John James Hart of Cantuar was featured during the first week of the Veteran of the Week program. He was killed in action during the First World War.