Posted on 8 September 2021 by Matthew Liebenberg 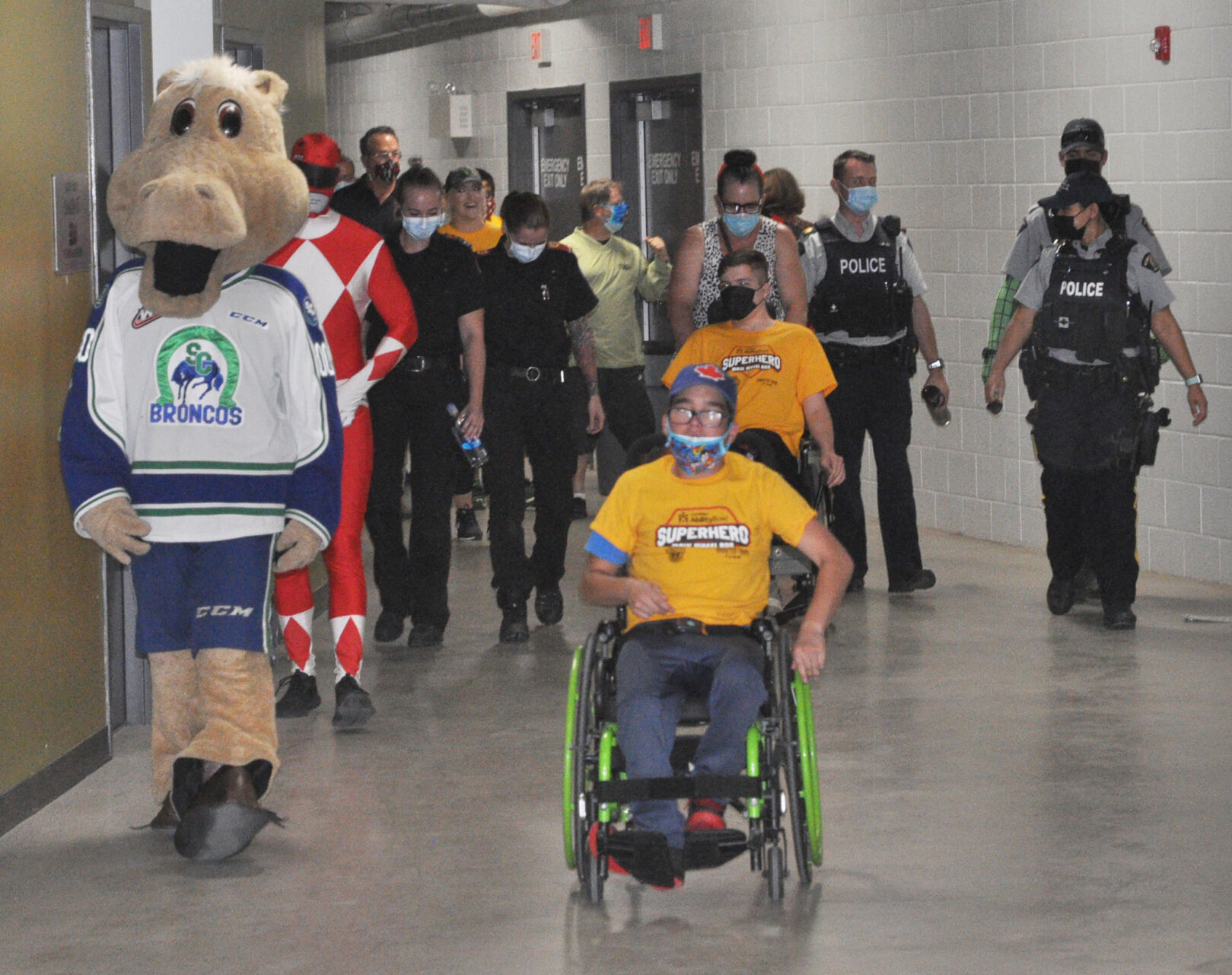 The superhero fundraising efforts by teams and individuals made it possible for SaskAbilities Swift Current to raise over $70,000 for programs and services provided to individuals experiencing disability.

Participating teams and individuals collected pledges for the fundraising event and then got active during the two-week period to walk, wheel or run over a distance of their choosing.

Participants were not required to complete a specific distance, because the intention was to have fun, get physically active, and to raise funds for SaskAbilities.

The event was originally scheduled to take place outdoors at the Swift Current Comprehensive High School track, but was moved indoors at the Innovation Credit Union iPlex due to the risk of poor weather.

SaskAbilities Regional Director Kimi Duzan announced at the event that the fundraising total was over $70,000 and she fully anticipated the goal of $100,000 will be reached this calendar year.

“We’ve had a number of events that have culminated and will continue for the rest of the calendar year under the name of Walk Wheel Run, which is inclusive,” she said. “Anybody can participate. A person in a wheelchair, a senior with a walker, an athlete and of all kinds and abilities.”

She watched with anticipation as the fundraising total continued to increase with donations being made in the run-up to Aug. 28.

“Our official cut off for fundraising that we will honour for those that contributed was Saturday, Aug. 28 at midnight,” she said. “I was watching the last few hours and see the totals go up, but the effort isn’t done. And so here we are with the emergency workers making their contribution. They bring in a significant amount of funds and they’re always bringing fun.”

She expressed appreciation for the community support from across southwest Saskatchewan for this fundraising event and the various ways people got involved.

“There are so many ways that we’re blessed with support,” she said. “It might be the contribution of a prize or in-kind sponsorships. One of those key sponsors for in-kind is the Broncos. They as well need the resources, but they bring their energy, their focus to SaskAbilities. Others are sponsorships of cash and pledges. Amounts can be from $10 and I think the highest individual contribution was $6,000. So it’s a whole range and what that all means is kids who experience disability can have recreational opportunities year round here in the Swift Current region.”

The amount raised during the 2021 Walk, Wheel, Run event has already exceeded last year’s total of $65,000 in cash and kind contributions.

Last year’s inaugural Superhero Bowl: Walk, Wheel, Run was organized as a means to continue fundraising during the COVID-19 pandemic, because it was not possible to host the in-person Ability Bowl.

Duzan noted it was basically a case of applying the principles of the familiar expression that when life gives you lemons, then make lemonade. The Walk, Wheel, Run event has proven to be a popular format and it will therefore continue, even after the return of Ability Bowl.

“We fully anticipate, Ability Bowl or not, to continue with this Walk, Wheel, Run format,” she said. “It has drawn in a different group of community members and ultimately raised awareness of the challenges of having a disability and how best to support inclusion in our community. So we’re still wanting an Ability Bowl, but we’ve very much seen the benefit of the Walk, Wheel, Run event. A different group, a different time of year, and them moving more to online pledges and activities.”

The online pledge format made it possible for Walk, Wheel, Run participants to receive support from a much wider area than their immediate location.

“We’ve had examples of where individual participants have raised pledges from as far away as California, because each person builds their network and if you do it online or through social media, the world is available,” she said. “So there’s other things that come with the regeneration of some of these opportunities.”

Donations to Walk, Wheel, Run can still be made online at http://www.abilitybowl.ca and cash or cheque donations can be dropped off at the SaskAbilities Swift Current branch (1551 North Railway St. W).