Posted on 1 September 2021 by Matthew Liebenberg 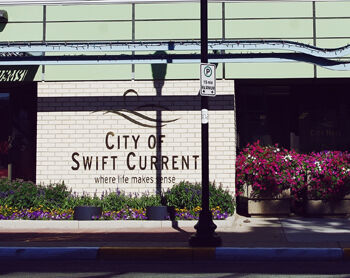 The City of Swift Current will be proceeding with the first major upgrading project to the rural water pipeline since acquiring the system of pipelines in 2014.

Council members approved the contract for the pipeline construction project during a regular council meeting, Aug. 23.

The contract was awarded to Knudsen Excavating of Swift Current at a total cost of $299,044.02 (including 10 per cent contingency, PST included, GST excluded).

The rural water pipeline system provides water to resident and businesses located to the east, west and south of the city. This project will address issues with water outages in the Warkentin subdivision, located south of the city next to Highway No. 4.

City General Manager of Infrastructure and Operations Mitch Minken told the meeting the East Rural Water Pipeline (RWP) serves approximately 86 subscribers, of which 33 are located in the Warkentin subdivision.

AECOM, an engineering consulting company, carried out an assessment in 2020, which indicated the water outages in Warkentin subdivision is due to inadequate pipeline sizing, lack of pumping capacity, and the elevation difference between the subdivision and the East RWP booster station.

This situation will only become more severe in the future and the City therefore decided to proceed with the upgrading project.

“As new subscribers connect to the pipeline, the system will be pushed beyond its capacity and shortages will become more prevalent,” he said. “Following the assessment, the City put a hold on new connections in the Warkentin area.”

The upgrading project will create a separation on the East RWP and establish the new South RWP. The project design includes two kilometres of pipeline extension and a new pumphouse.

“The new network will have capacity for approximately 120 new subscribers and will free up supply on the East RWP for an additional 35 subscribers,” he said.

The total capital budget for this project is $700,000 and the tender for the pumphouse will be issued soon. The funds for this capital project are obtained from the utility payments made by rural water users. A capital levy is applied to all rural water users and there is a one-time fee of $10,000 for a new connection to the rural water pipeline system.

The rural water pipeline utility has an operating surplus and there is approximately $400,000 in the capital surcharge account that will be used for these improvements.

“These are the first investments that we’ve actually started to make back into the system,” Minken noted.

Minken provided additional details about the upgrading project during an interview with the Prairie Post after the council meeting. The East RWP will have a connection to the new South RWP that can be useful in an emergency situation.

“There’ll be a valve between them that will be closed,” he said. “So in an emergency situation, if we needed to feed either one of those pipelines from the other one, we’ll be able to do that.”

There is currently sufficient capacity on the East RWP for households in the Warkentin subdivision, but users cannot do any irrigation with the system as it is.

“The RM actually put in an irrigation ban for this year to get us through until we can get this project completed,” he said. “So our hope is that we would be ready to roll for next year’s season. So through the winter there’s no real issue. It’s all to make sure we’ve got enough capacity up there so that subdivision can get build out fully.”

Minken felt in retrospect the City’s decision to take control of the rural water pipeline system in 2014 was a good one.

“It was in a situation where we have the expertise and the people that can actually operate that pipeline,” he said. “The operator that was running the pipeline system for the RM was retiring and was leaving. So the RM would have had to find somebody to operate that line and to take it forward. So it turned out to be a good regional initiative for the City, with the resources we have to take over that pipeline to ensure that those rural users would get served well.”

Council approved a contract with Boire Trucking Ltd of Gravelbourg at a cost of $266,060 (PST included, GST excluded) for the slope rehabilitation along the Swift Current Creek behind the Regier Honda dealership as part of the expansion of the Chinook Parkway.

This work will be part of the $5.9 million active transportation expansion project, for which the City has received federal funding through the Investing in Canada Infrastructure Program.

Three locations along the creek bank behind the vehicle dealership needs to be stabilized before the installation of a boardwalk. The work in these areas will include the reshaping of eroded areas and filling it with compacted material, the installation of geosynthetics, riprap rock, erosion matting and vegetation, and providing additional riprap around existing stormwater outfalls to reduce the velocity of water flow into the creek.

Details were provided during the City council meeting of Aug. 23 about a payment of $18,000 for pumping equipment for the irrigation ponds at Elmwood golf course.

City Chief Administrative Officer Tim Marcus said there is a partnership agreement between the City and Elmwood golf club. The club experienced irrigation problems and asked for the City’s assistance.

The City was able to offer its expertise to the club and during this process also purchased the necessary pumping equipment. The golf club will fully refund the City for this expense.