Posted on 11 August 2021 by Matthew Liebenberg 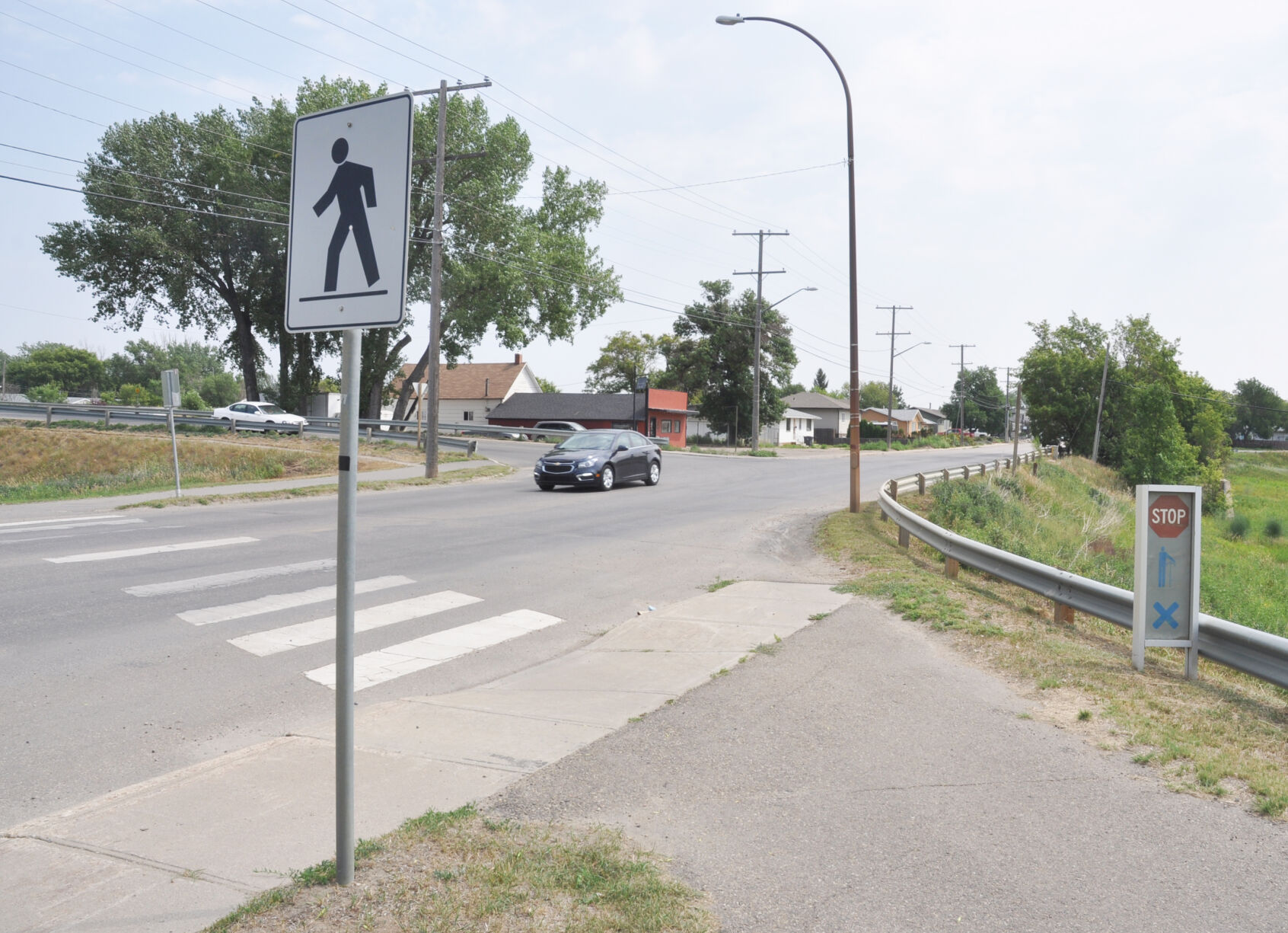 This crosswalk along South Railway Street East at Riverside Park will be upgraded to increase pedestrian safety.

Pedestrian safety will be improved at two crosswalks in Swift Current as a result of financial support from a provincial traffic safety fund.

The amount of $49,000 for upgrades at two pedestrian crossings in the community will be fully funded through the Saskatchewan Government Insurance (SGI) Provincial Traffic Safety Fund Grant program.

City General Manager of Infrastructure and Operations Mitch Minken provided details about the grant and the improvement project during the meeting.

SGI announced this grant program in January. Municipalities are eligible to receive up to $100,000 for projects in support of traffic safety awareness and to reduce the frequency and severity of injuries and fatalities.

The City submitted an application for improvements at two pedestrian crossings that provide access to two of the largest parks in the community.

The one pedestrian crossing along North Hill Drive provides access to Riverdene Park. The other crosswalk along the very busy South Railway Street East connects to Riverside Park.

“These two crossings will receive enhancements to increase visibility by installing push activated rectangular rapid flashing beacons (RRFB),” he said. “In addition to the RRFB’s, a curb extension will be constructed at the South Railway/Riverside Park crossing to allow for improved visibility and a shortened crossing distance.”

The City’s application was successful, and the amount of $49,000 will fund the cost of all material and the concrete installation. The City will provide the labour to install the RRFB’s and the new signage at the two pedestrian crossings.

Minken noted the delivery of the RRFB systems will determine the completion time of the improvement project. He expected the construction work will be done by the end of October and the installation of the RRFB’s will be done by City Light and Power employees.

Council members expressed their support for the project and the improvement of pedestrian safety at the two locations.

“Just looking at these two locations and being familiar with them, I know both could use some enhanced safety,” Councillor Pat Friesen said.

She felt the improvements at the crosswalk along North Hill Drive will be especially beneficial during winter, when families are tobogganing in Riverdene Park.

“And at the south side it’s the same thing,” she added. “There’s a lot of pedestrians there and there’s a lot of traffic. So thanks to SGI for providing the program and I’m looking forward to seeing the enhanced safety for our citizens in these two locations.”

Councillor Ryan Switzer expressed his strong support for the improvements at the pedestrian crossing on the city’s south side at Riverside Park.

“At times I’ve walked that crosswalk twice a day and just for whatever reason people don’t stop there,” he said. “It begins with that dip down the street right by the fair grounds and people get a heavy foot on that street, and you get the sun setting in the western sky.”

He noted there are increased activity in Riverside Park with a variety of events and people participating in leisure activities such as tennis, pickle ball, beach volleyball and disc golf.

“There’s a lot of traffic flow there and there’s only going to be more in coming years with all these activities in that south side park,” he said. “I feel this could potentially safe a life just with that intersection and sometimes people being in a hurry after waiting on a train.”

Council approved a contract during the July 26 regular meeting for the installation of the force main and related work at a waste water lift station for a total cost of $319,000 (10 per cent contingency fee included, PST included, GST excluded).

City General Manager of Infrastructure and Operations Mitch Minken said lift station no. 7 services the residential areas of Cypress Point and a portion of the Centennial subdivision, which are both located adjacent to the Elmwood golf course. It shares a force main with lift station no. 12, which services another portion of the Centennial subdivision as well as the industrial parks located along Memorial Drive (Highway No. 4).

Lift station no. 12 therefore has greater flow, and this causes technical problems when the two lift stations are pumping waste water to a lagoon cell at the waste water treatment facility.

“The pumps at No. 7 do not have the capacity to overcome the pressure in the force main when No. 12 is operating,” he explained. “Consequently, No. 7 can only pump sewage when No. 12 is not operating. Although not ideal, the configuration works with current flows. As sanitary flows increase from continued development of the contribution areas of Cypress Point, South Munro and the water treatment plant residuals, the system will no longer be able to operate in this configuration.”

AECOM consulting engineers carried out a feasibility study during 2020 to find a solution for this technical problem. The recommended solution is to install approximately 635 meters (2,100 feet) of force main pipe along Memorial Drive that will redirect waste water from lift station no. 7 into the force main operated by lift station no. 12.

This will mean that lift station no. 12 will become the dedicated force main for pumping waste water towards the lagoon. The project can be carried out without any disruptions to traffic along Memorial Drive.

“The new force main runs within the right-of-way of Memorial Drive and will not require any highway crossings,” he said. “It will also provide partial redundancy, as the existing shared force main can be utilized as a bypass if needed during times of maintenance.”

This crosswalk along South Railway Street East at Riverside Park will be upgraded to increase pedestrian safety.