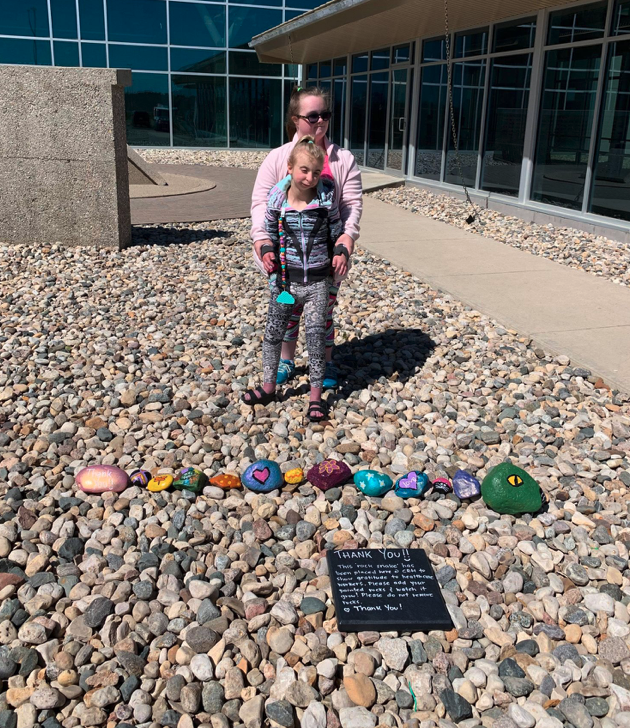 Best friends Tamara Gleim (in pink) and Avery Andres proudly stand behind a special tribute to Sask. Health Care workers in front of the Cypress Regional Hospital in Swift Current.

Two special Swift Current teenagers wanted to thank those workers for all that they do, especially during this difficult time in history. The two besties wanted to make sure those front line workers in Swift Current were reminded every day how appreciated they are.

Avery Andres and Tamara Gleim took time from their regular school routines and painted numerous rocks and arranged them appropriately on the ground to help create a “rock snake.” The rock snake is a visible reminder for all of those entering the front entrance of the Cypress Regional Hospital in Swift Current.

Tamara has Down’s Syndrome and Avery has Rubinstein-Taybi Syndrome so they know the importance of those who work in the health field. Tamara said she and Avery had fun doing it.

Tamara said she started with painting one rock green and then just continued from there. Her second one was pink, one of her favourite colours. Tamara added that they got some help in creating some of the designs.

“My favourite one is the pink,” she said in a phone interview with the help of her teacher Sarah MacDonald.

The goal is to have members of the public contribute to it. Avery’s caregiver Andrea Orr, says those around the two special teens are so proud of them.

Orr’s fiancÃ© has an aunt and uncle in Melfort. The uncle is the mayor and so they are very in tune with all the happenings there. So, Orr enjoys following their fun and one day a few weeks she came across a post that piqued her interest.

“(The aunt) posted on Facebook that she had come across this rock snake at the Melfort Hospital, and I thought it was such a cool idea,” explains Orr. “We’re always looking for fun crafts for the girls to do together, they’re besties and they love hanging out and just get together toy just chill or do a craft together so when I saw it I thought ‘oh gosh the girls are going to love this,’ they love painting rocks and it is such a good cause.”

Orr went to the girls with the idea prior to one of their scheduled activity sessions. Orr says that Tamara thought “it was the best thing ever” and Avery through a special communication device expressed her happiness too.

“So on a few different days where we got the girls together, they painted their little hearts out,” explains Orr. “I asked them where they wanted to put it and the hospital was a good start. They thought of it got big enough it would get over to the school (nearby) and thank those essential workers too.

“So we started as a hospital mostly just because these are both medical kiddos, and Avery, especially spends a ridiculous amount of time in hospitals. We have seen over the past year and a half, what all of the nurses, doctors and janitorial staff and admin have been going through. I think we just wanted to say ‘thank-you’ and show them that we love them and support them. And we wanted to bring them a little bit of joy. We know their days are long and hard right now, like everybody’s are, but they have that extra stressor of having to take care of everybody during this. We just wanted to bring some joy. The idea kinda took off from there, we thought we would post it on Facebook so other people in the community would know it is there.”

The local Sask. Health Authority workers know the snake is there. Natalie Pister-LeBlanc, an Emergency Medical Technician was thankful and impressed with the gesture and work.

“I first saw it (recently) when Andrea posted it on Facebook and honestly the first thing that comes to mind is a feeling of happiness of course and these two wonderful young ladies, showing their appreciation for healthcare workers and such a creative way and I thought that was quite nice,” she explains. “We’re very thankful for that and it definitely brings a smile to your face. I just thought it was wonderful.”

Pister-LeBlanc says the outpouring of support from the public has been inspiring and noted something like the rock snake and the mural painted at the back door of the hospital are inspiring.

Orr added hundreds of people initially reached out  asking what the concept of it is. It has been really exciting for the girls’ creation to come to fruition.

“It can be such a stressful time, but everyone keeps pushing on and ideas such as these, it just motivates everybody, it lifts spirits,” Pister-LeBlanc adds.

It start there were a dozen rocks but the expectation is for it too grow. The rocks have  phrases such as “thank you”; “love” or “always be you”.

There are other symbols such as a dragon fly which represents  that every day is a new beginning.

“It is what the dragon fly stands for and that is kind of our philosophy with the girls that every day is a new beginning, you can always start over,” said Orr who noted Avery and Tamara were extra motivated and focused on doing the rocks knowing the importance. “Usually we lose Avery’s interest in an activity, like she would (normally) take a rock and that is it, but this one she came back and painted her whole heart out. Tamara was just so excited and asked so many questions, what should we paint on them, what order are they going in, she was just excited.”

Orr added that the Cypress Hills administration said were very receptive to the idea and insisted the rocks be put at the front entrance and not the back. They wanted as many people as possible to see and enjoy the work.

Best friends Tamara Gleim (in pink) and Avery Andres proudly stand behind a special tribute to Sask. Health Care workers in front of the Cypress Regional Hospital in Swift Current.