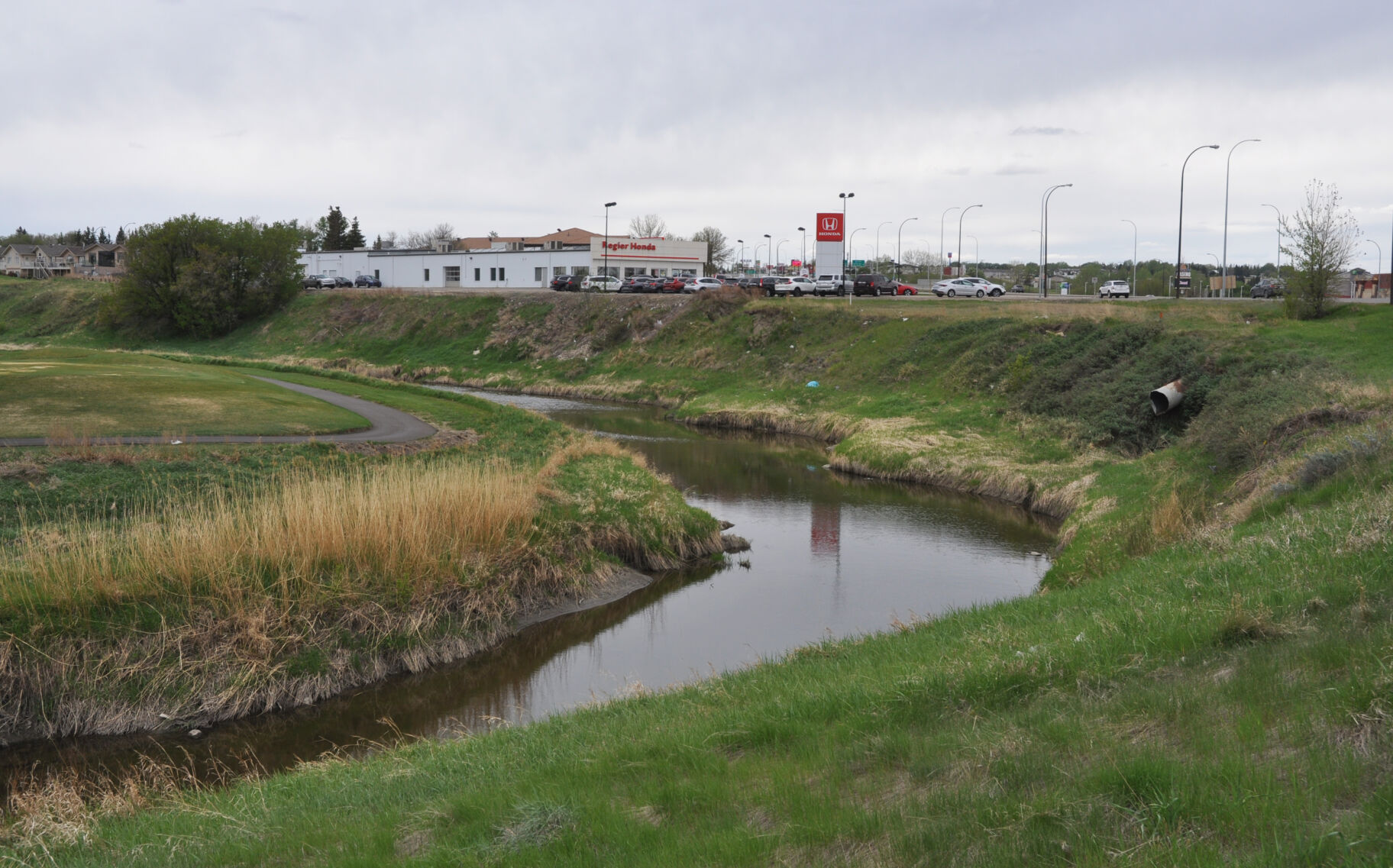 The City of Swift Current\'s active transportation expansion project will include extending the Chinook Parkway along the northern bank of the Swift Current Creek behind the Regier Honda dealership up to Highway No. 4. The Elmwood golf course is located on the opposite side.

The City of Swift Current is receiving federal and provincial funding for a major capital project with a total value of almost $6 million to construct about 11 kilometres of new pathway and sidewalk in the community.

Council members approved the inclusion of the active transportation expansion project in the 2021 capital budget and awarded the pathway and sidewalk expansion contract during a regular council meeting, May 17.

The total cost of the active transportation expansion project will be $5,996,516. The funding support from the federal and provincial levels of government was announced earlier this month, and the recipient agreement between the City and the Saskatchewan government was concluded on May 12.

“I always think anytime that we can get $6 million worth of work for a $1.6 million investment is a pretty good day,” Councillor Pat Friesen said in support of the project. “So I’m very pleased to see that we’re able to partner with the feds and the provincial government to make this happen. It’s a great project.”

Swift Current is one of several municipalities benefitting from the joint funding provided by the Canadian and Saskatchewan governments for 55 infrastructure projects in the province at a total cost of over $50.2 million. All these projects are funded under the COVID-19 Resilience Infrastructure Stream (CVRIS) of the Investing in Canada Infrastructure Program (ICIP).

The intention of the CVRIS funding stream is to provide financial support for quick-start, short-term projects. Eligible projects had to fall into one of several categories, and the City of Swift Current’s project was submitted under the category for active transportation infrastructure, which includes projects such as parks, trails, foot bridges, bike lanes and multi-use paths.

Councillor Ryan Switzer expressed his support for the City’s project, because it will address a need in the community.

“In the last election lots of people were asking about the possibility of Swift Current to be more connected for pedestrians and cyclists, and I’m a huge fan of this project,” he said.

The City’s portion of the project cost will be funded largely through the use of funds previously allocated as a capital budget expenditure. The amount of $1,338,248 was formerly approved for the Chinook Parkway bank stabilization and boardwalk project, which will now become part of this larger active transportation expansion project.

The remaining funds for the City’s portion of the expansion project will be a reallocation from the Safe Restart Fund, which is an amount of close to $1 million previously provided to the City as part of a federal initiative to provide financial support to municipalities during the pandemic.

Work for the City’s active transportation expansion project will be carried out across Swift Current. The southern part the Chinook Parkway, which now ends at the cutbanks next to 4th Avenue SE, will be expanded west along Marston Street up to the Windscape kite festival site.

The northern part of the Chinook Parkway, which now ends at the Mayor’s Grove rest area next to North Hill Drive, will be expanded along the Swift Current Creek behind the Regier Honda dealership up to Highway No. 4. This section of the project will include the stabilization of the creek bank as well as the installation of a boardwalk.

Asphalt pathways will be constructed in the northwest corner of the city along 11th Avenue NW and along North Service Road.

Sidewalks will be constructed in various areas of the city, including along 11th Avenue NE at Swift Current Comprehensive High School and along streets such as Springs Drive in the commercial area at the Swift Current Mall.

The first tender for this project to construct the pathways and sidewalks was awarded to Mobile Paving Ltd. of Swift Current at a cost of $2,451,046.28 (10 per cent contingency and PST included, GST excluded). Several other tenders will still be issued for this project, including for the creek bank stabilization, landscaping, and pathway lighting.

This entire project is under a tight timeline and it must be completed by the end of 2021. Mayor Al Bridal is confident the work will be completed on schedule.

“I think we will be fine,” he said. “I know the contractor Mobile Paving is very excited about it and getting at it. It’s right at home, work right at home. They’re very excited. Both Mobile Paving and their sub trade that does the concrete work, they both assured the City and administration they will have it done by this fall. As a matter of fact, I think the pavement pathways are going to be done in August and the sidewalks they’re going to have them done right around the same time, from what I understand.”

The City of Swift Current’s active transportation expansion project will include extending the Chinook Parkway along the northern bank of the Swift Current Creek behind the Regier Honda dealership up to Highway No. 4. The Elmwood golf course is located on the opposite side.