Posted on 14 April 2021 by Matthew Liebenberg 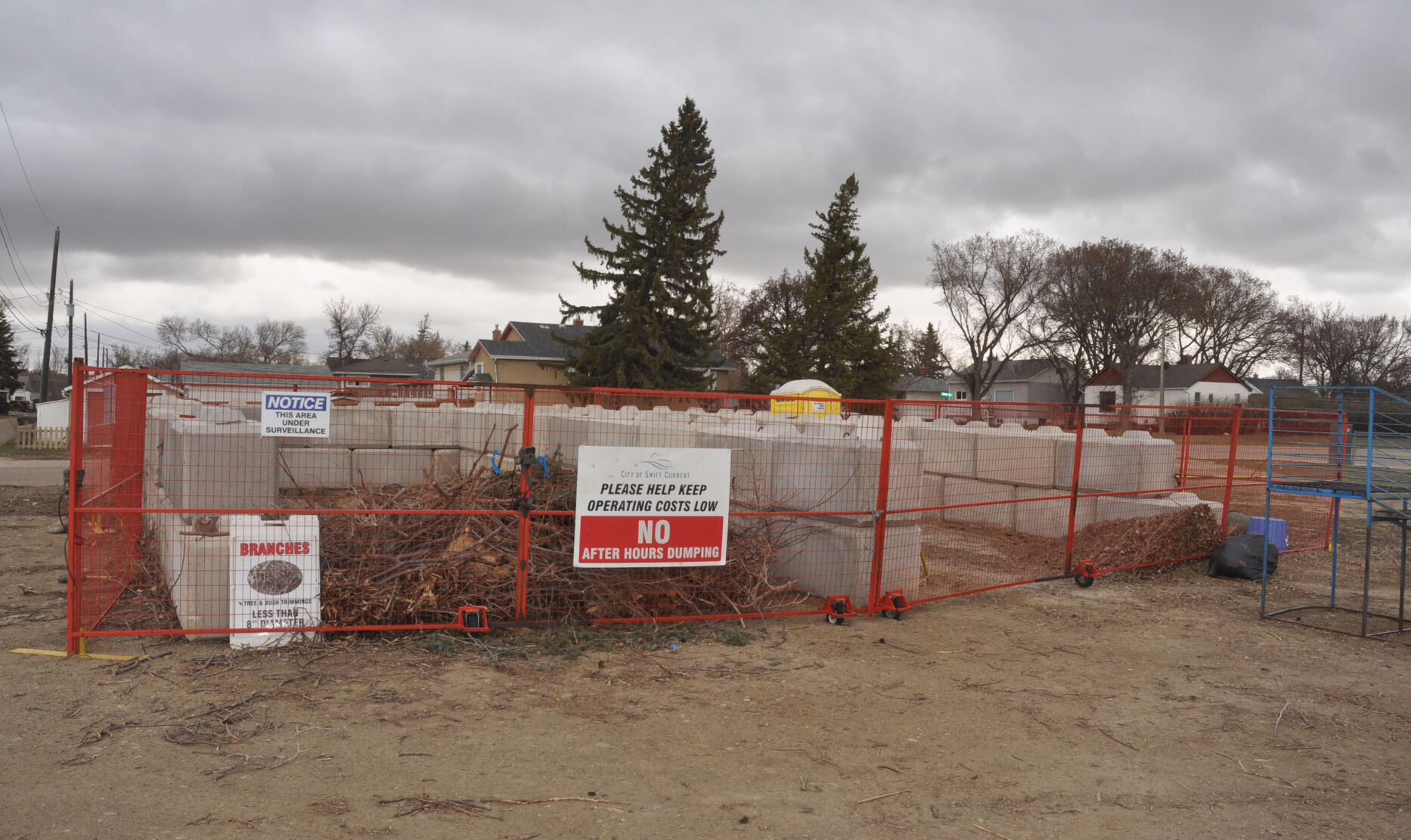 The two residential yard waste collection sites in Swift Current will reopen for the season on April 17. Pictures is the site on the city\'s south side located on the former St. Joseph\'s school site on Dahl Street.

The contract for the operation of the yard waste collection sites in Swift Current has been renewed for one year with no increase in cost for the City of Swift Current.

City General Manager of Infrastructure and Operations Mitch Minken told the meeting the cost of operations did not increase during the three-year period of the original contract with Swift Kerb, and the contractor offered to continue the service in 2021 at the same cost.

The new contract is for the operation of two collection sites in the city from April 17 to Oct. 31 and for the hauling of materials to the landfill compost operations. The total cost of the contract is $99,000 (PST exempt, GST excluded), which will be funded through the City’s solid waste utility operating budget.

“In the past three years of site operation, Swift Kerb has proven to be reliable, professional and efficient, adapting to increasing annual volumes of materials received and maintaining safe services throughout the 2020 pandemic restrictions,” he said.

The yard waste collection sites are located in the parking lot at the Innovation Credit Union iPlex and at the former St. Joseph’s school site. The free-of-charge service for residents accepts organic material such as plant matter, leaves, grass clippings and wood trimmings.

The yard waste collection service has been in operation in Swift Current since 2014. According to Minken the ground-level style bunker bins used by Swift Kerb since 2018 has resulted in a more efficient operation that provides easier access for unloading of yard waste.

“Enhanced supervision has dramatically reduced contamination from regular waste that was disposed in the bins in previous program models, which has resulted in clean materials that are used to produce high quality compost at the landfill,” he said.

The City only renewed this contract with Swift Kerb for one year, because the intention is to merge the yard waste collection site contract with the compost program. A new tender for the combined program will therefore be issued in 2022.

Swift Kerb is a contracting company located in the McMahon area southeast of Swift Current. Minken said the original contract for the yard waste collection contract was done through a request for proposal (RFP), but this process was not followed to extend the contract for only one year.

Councillor John Wall said he is disappointed that the contract was given to an out-of-town business and he is certain a local business can provide this service.

“I have a hard time supporting out-of-town contractors when we have capable people and contractors that would be willing to do this,” he said. “Anyways, we look forward to doing that maybe next year.”

Mayor Al Bridal said administration’s decision not to have an RFP for the one-year extension of the contract with Swift Kerb came after he had a discussion with Minken a while ago.

Bridal said during an online media briefing after the council meeting that he did not see the need to formally review the criteria to define a local contractor in view of Councillor Wall’s remarks, although council might discuss it.

“I don’t know that we need to clarify any kind of a City bylaw or a memo or anything like that,” Bridal said. “For me, I’ll be very honest, local contract to me means someone in the area. If they’re coming in from Medicine Hat or from Moose Jaw, I would think they’re non-local. â€¦ I think it is pretty good in my mind to consider local as Swift Current and the surrounding. Everybody has their own opinion and Councillor Wall has his, and it’s something that as a council we need to sit and talk about, but I don’t draw the line at the City boundaries per se.”

Council approved an amendment to the existing Municipal Economic Enhancement Program (MEEP) funding agreement to allow for the reallocation of funding to other projects.

The Saskatchewan government launched the MEEP initiative in May 2020 to provide grant funding to municipalities to stimulate economic recovery and job creation. The City of Swift Current received a total of $2,386,467 in grant funding from MEEP, which must be spend by March 31, 2022.

The City already completed one project supported with MEEP funding to do upgrades at the Fairview Arena. The largest portion of MEEP funding was allocated to the Friesen Street storm rehabilitation project, but the tender is under budget and $444,053 can be reallocated to other approved capital projects.

City Chief Administrative Officer Tim Marcus told the council meeting on April 6 that the reallocation of the funding required an amendment to the original MEEP agreement.

The City will use the reallocated MEEP funds to replace 15 self-contained breathing apparatus for the Fire Department at an estimated cost of $125,000. The remaining $319,053 will be used to fund most of the cost of a project to replace the floor inside the Stockade. The total cost of the floor replacement project will be an estimated $350,000.

“Even though the combined value of these two projects is more than the City’s remaining allocation from MEEP, any additional costs incurred are the responsibility of the municipality,” he said. “No additional tax increase will be required to fund the City’s portion of these projects.”

The two residential yard waste collection sites in Swift Current will reopen for the season on April 17. Pictures is the site on the city’s south side located on the former St. Joseph’s school site on Dahl Street.