Posted on 17 March 2021 by Matthew Liebenberg 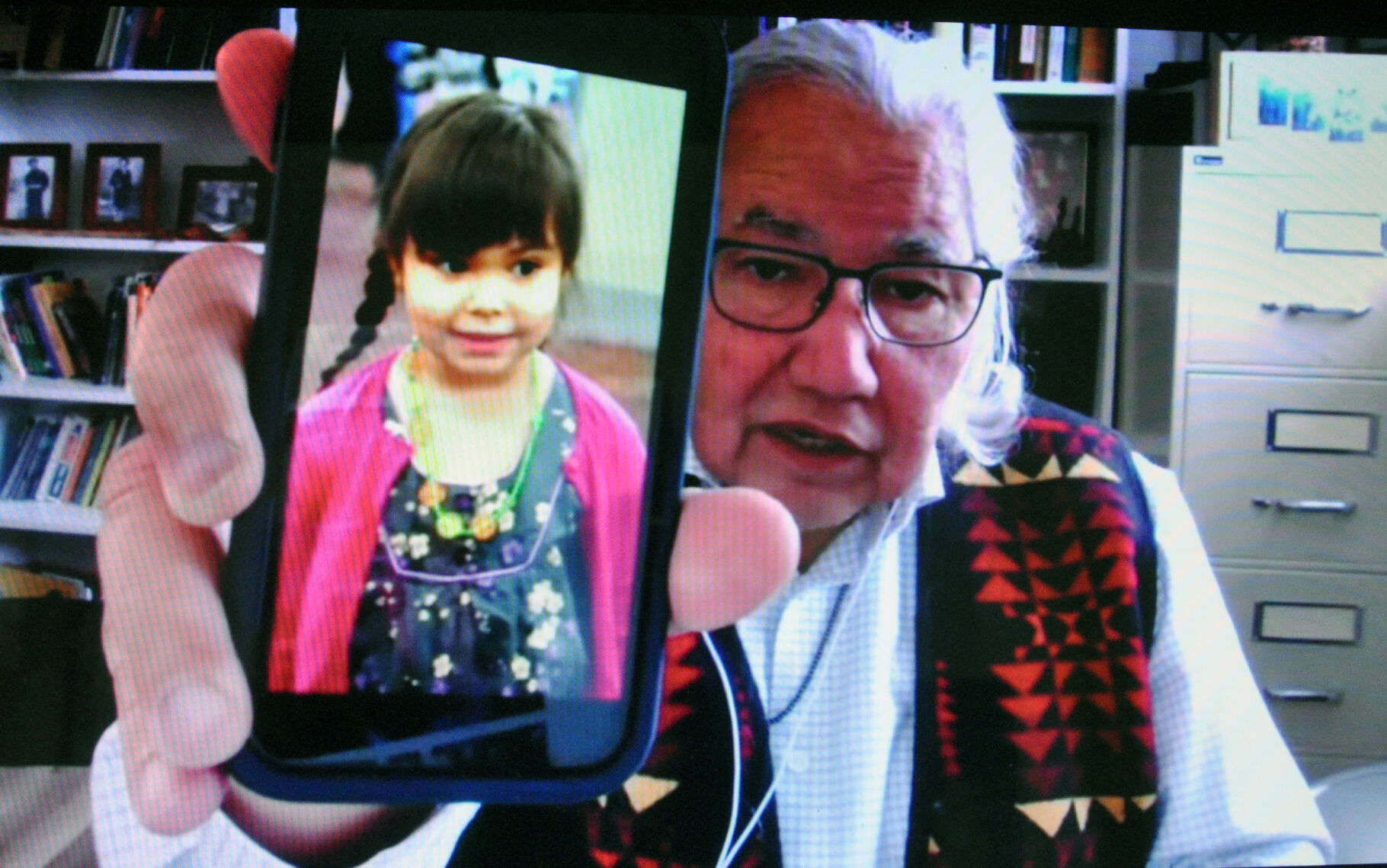 <p>Murray Sinclair, the former chair of the Truth and Reconciliation Commission of Canada, holds up an image of his granddaughter during his presentation as part of the Swift Current virtual truth and reconciliation speaker series, March 3.</p>
Recent Posts
Recent Comments

Murray Sinclair, the former chair of the Truth and Reconciliation Commission (TRC) of Canada, was the presenter for the launch of the speaker series, March 3.

His distinguished career included being appointed as the first indigenous judge in Manitoba in 1988 and sitting as an independent senator in the Senate from 2016 until his retirement in January 2021.

He spoke during two virtual presentations. The morning presentation was made to Chinook School Division students and there was a public presentation in the afternoon. He also spoke afterwards to local media during a telephone conference call.

Sinclair started his afternoon address by holding up his cell phone to show a photograph of his granddaughter Sarah, who was five years old when he became the TRC chair in 2009.

“I often get asked by people what motivated you to do this work and how were you able to manage all of the pressures and stresses of doing this work, and I would say to them it’s because I always kept the survivors in mind,” he mentioned. “I always thought about them as I was doing my work, but I also thought about the children of the survivors and the little children like Sarah, because when the children were taken away and put in residential school, they were not much older than that.”

He noted that most of the viewers watching his presentation will have young children in their own families and he asked them to consider what those children mean to them, because if they want to try to understand the ramifications and impact of residential schools on the children that were taken there, they have to imagine what it would be like for them.

“Imagine what it would be like for you if somebody came to your house today from the Government of Canada and took your child away from you and said to you, we’re taking your child because we’re going to educate them in an institution, but you will not be allowed to come and see them,” he said. “You will not be allowed to take them out, you will have no choice about what they’re taught, you will have no say about anything that happens to them in the school, and in fact if you try to take them out of the school or if you refuse to send them to the school, you will be prosecuted.”

He referred to four important questions that every society aims to create opportunities for children to find answers to while they grow up into adulthood. These questions are: Where do I come from, where am I going, what is my purpose in life, and who am I?

As a result, those children had literally no real identity when they left the residential schools. The goal of these schools was supposed to be to teach them to be part of white society, but they were not accepted and they did not know who they were.

“They could not assert themselves in the face of all of the things that they were challenged to do,” he said. “They couldn’t find a way to fit in to that society, and therefore often fell by the wayside and often were unable to compete and unable to participate in what was going on, and they also encountered racism of course on the other side.”

Indigenous children who did not go to residential schools encountered the same message in public schools that their culture is inferior and that European people had a superior civilization.

“Historically everything that Canadian society has done, was done in order to support those decisions that contributed to those approaches to indigenous people, to justify taking children away from their parents and placing them in residential schools, to justify what the government was doing through its laws,” he said. “Taking the lands of the indigenous people, interfering with the way they governed themselves, undermining their traditional leaders, confining people to reserves, imposing the pass system so that you had to have a written permission just to leave your community. The government justified that by saying these are inferior people and they need us to control their lives better or they will simply be taken advantage of, they will be lost.”

He noted that newcomers who come to Canada often have preconceived views about indigenous people that are similar to the ideas that were historically taught to European children in this country.

He felt the biggest hurdle towards reconciliation is the fact that people have been indoctrinated into believing indigenous people are inferior, but he believes education provides the way forward.

“That is why I said at the end of the TRC that the key to reconciliation is education,” he explained. “It was education that got us into this through the use of schools, but education and the way we educate our children going forward is the key to reconciliation, because we need to teach our children the fuller sense of the history of this country, including what indigenous people were doing and thinking and how they were behaving and taking care of themselves before the Europeans came here so that everybody will know that they were indeed a valid people, a valid civilization, and the way that we talk to and about each other will change as a result of that.”

Sinclair elaborated on some of the details of his presentation during the conference call with local media. He felt the education curriculum still needs improvements to reflect the role and contribution of indigenous societies before Confederation.

“Even the changes to the curriculum materials and the public school teaching methods that have been adopted since the TRC have concentrated on the period from Confederation to this point in time, and even from contact to this point in time,” he said. “So still very little effort has been made to providing an element of awareness about the existence of indigenous people before the arrival of Europeans and the nature of that existence, the nature of their organizations, the nature of their societies, and the nature of their belief systems, and therefore renders them invalid as an occupying force, as a presence of humans. That lack of validity to their existence contributes to a belief on the part of those who come out of that educational system that indigenous people don’t count for much.”

He finds hope in the growing awareness in Canadian society about the country’s past, including a greater understanding of the impact of residential schools on individuals and society at large.

“The growing level of awareness is the first major element of growth that I’ve seen and it was happening during the TRC process, but it’s also increased with the release of the report and the work since the release of the report,” he said. “And much of that work, I would point out in fairness to the churches especially, much of that work is being done by church congregations who have picked up the challenge of doing what they can to communicate reconciliation to the members of their congregations as well as to members of the public as large.”

He felt local events and efforts to promote reconciliation, such as this Swift Current speaker series, are important to promote understanding.

He emphasized that reconciliation will remain an ongoing process and it can never reach a point where it becomes a static situation.

“Reconciliation is not a static state,” he said. “So you will never, ever get to a point where you can say we have now reconciled and therefore everything is hunky-dory, because once you get to a point where you are able to talk to and about each other with mutual respect, you will always have to continue to work at doing that. â€¦ Almost all of the faith systems in the world talk about every day when you get up, you have to promise the Creator that today you will live in accordance with the teachings that the Creator has given to you. So it is on that basis that we will be able to say that we are living in a society in which we are able to treat each other in a mutually respectful way.”

The virtual truth and reconciliation speaker series was organized by the Southwest Multicultural Association in partnership with various other local and provincial organizations. The other presenters in the series were Saskatoon artist and social activist Zoey Roy and Treaty Commissioner of Saskatchewan Mary Culbertson. Their presentations took place on March 10 and 17, and all three presentations in this series are available to watch online at http://www.trc-swsk.ca

Murray Sinclair, the former chair of the Truth and Reconciliation Commission of Canada, holds up an image of his granddaughter during his presentation as part of the Swift Current virtual truth and reconciliation speaker series, March 3.