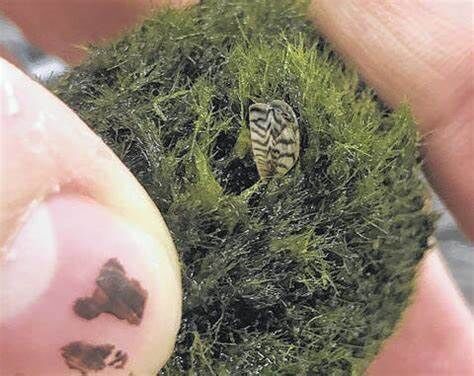 Zebra mussels, a prohibited aquatic invasive species, have been found in a variety of moss/algal ball products for aquariums or water gardens sold in western Canada, including in Saskatchewan.  These products are often sold as Marimo Moss Balls and are a popular ornamental plant kept with betta fish.

Due to the significant risk to Saskatchewan’s aquatic ecosystems, the Ministry of Environment is asking the public to remove and properly dispose of all moss/algal balls in their possession purchased after January 1, 2021.

The Canadian Council on Invasive Species (CCIS)  is expressing alarm after deadly zebra mussels were found in aquarium plants in BC and Washington state, and are advising aquarium owners across Canada to immediately check the plants in their aquariums for invasive species.

“It is alarming to know that zebra mussels are hiding in aquarium plants, because these dangerous invasive species can easily take hold in Canadian waterways causing serious damage to native species and fisheries and can cause damage of more than $43 million a year to municipal water supplies, recreational boating, and other infrastructure,” says Gail Wallin, Chair of the CCIS. “Every aquarium owner must check their plants today to be sure they don’t have any invasive species, especially contaminated moss balls,  in their aquariums.”

The zebra mussels found on moss balls in Saskatchewan have been extremely small (size of grain of sand) and often found inside the moss ball itself, making it nearly impossible to detect simply by visual inspection.

To be safe, follow these three steps to treat and properly dispose of moss/algal balls:

1. Treat the moss/algal balls, by placing into a plastic bag, seal and freeze (preferably in a deep freezer) for at least 24 hours OR placing in boiling water for at least one minute and then let cool.

2. Dispose of moss/algal balls by placing it and any of its packaging in a sealed plastic bag, and disposing of it in your household garbage.

3. Treat aquarium contents and water. After removing the moss balls from an aquarium, do not dispose of untreated water down the drain or into any residential water system or waterway.

IMPORTANT: DO NOT dispose of the moss/algal ball or any aquarium/water-garden contents (e.g. substrate, plants, etc.) by flushing it down the toilet, or putting it down a drain or in a compost.

Instead, take these additional steps:

For bowls and small tanks:

1. Remove fish or other living organisms from the aquarium and place them in another container, with water from a separate, uncontaminated water source.

2. Sterilize the remaining contaminated water from the bowl or small tank by adding 25 ml of bleach per litre of water.  Let the water sit for at least 15 minutes and then dispose of the sterilized water down a household drain.

3. Clean the aquarium and accessories using one of the following methods, ensuring that the method you choose is in accordance with manufacturer’s recommendations:

1. Boiling Method: Use water that is at least 60 degrees C/140 degrees F to flush and coat the tank and all accessory surfaces and allow to sit for a minimum of one minute; OR

2. Disinfection Method: Make a disinfection solution using 25 ml of bleach per litre of water. Soak the aquarium, substrate, rocks, d-cor, and filter media in the bleach water solution for 15 minutes. Rinse off all items before setting up the aquarium.  Disinfect filter media being changed by soaking it in a bleach solution (25 ml of bleach per litre of water) for at least 15 minutes before sealing it in a plastic bag and disposing of it in your household trash. Use a dechlorinating product to neutralize any residual chlorine before reintroducing aquatic life.

1. For larger aquariums and aquariums where complete disinfection is not possible, monitor your tank for the next several months for any unusual or unexpected aquatic life.

2. Treat water from all water changes during this period by adding 25 ml of bleach per litre of water that has been removed from the aquarium, and letting it sit for at least 15 minutes before disposing of the treated water down the drain.

3. Disinfect filter media being changed by soaking it in a bleach solution (25 ml of bleach per litre of water) for at least 15 minutes before sealing it in a plastic bag and disposing of it in your household trash.

Thanks to a well co-ordinated effort by jurisdictions across western Canada, and swift action and collaboration from retailers, moss balls were quickly removed from the supply chain, ensuring that potentially contaminated products are no longer available for distribution or purchase.

Both federal and provincial regulations make it illegal to introduce an aquatic species into a body of water where it is not native. Never release aquarium pets, water garden plants, live food (fish, crabs, mollusks) or live bait into rivers, streams, lakes, ponds or storm sewers.

If you think you have found a zebra mussel in a moss ball, in your aquarium, or anywhere else in the province, call Saskatchewan’s Turn In Poachers and Polluters (TIPP) line, toll-free, 1-800-667-7561.

To learn more about zebra mussels and other invasive species, visit www.saskatchewan.ca/invasive-species.

Or you can also learn more from the website https://canadainvasives.ca/.