Georgas will perform at Blenders 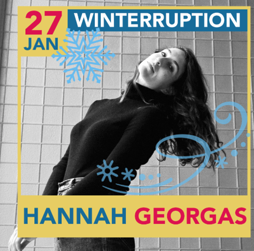 For the first time at Blenders: Hannah Georgas will be gracing the Lyric Theatre stage on Jan. 27, as part of the annual Winterruption Festival.

Since Hannah Georgas’ debut EP in 2009, she has evolved from a regionally based musician performing in smaller showcase venues, to a worldwide touring artist. Hannah has an endless capacity for crafting textured pop songs with evocative lyrics and catchy hooks.

These efforts and works of art have pulled her career to headline major festivals and support the high profile acts of Sara Bareilles, The National, City and Colour, Boy and Bear and more. Hannah has won numerous awards which have parallelled multiple nominations. In 2020, Hannah teamed up with Aaron Dessner (member/producer of The National, producer of Taylor Swift, Sharon Van Etten) in upstate New York to record and produce her incredible fourth album All That Emotion. The album was just nominated for Best Adult Alternative Album at last year’s Juno Music Awards.

Tickets for the Friday January 27th show are $42 PST included and are available at Swift Current Pharmasave, eventbrite.com, and blendersmusic.ca.