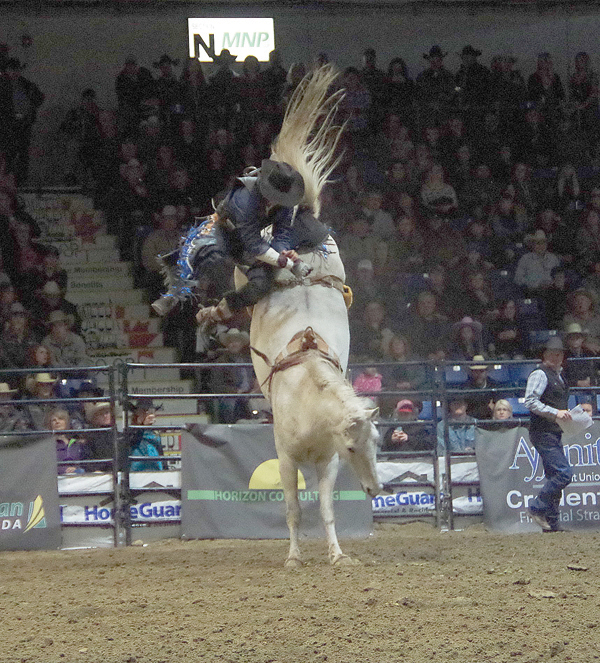 The opportunity to host a major rodeo event in Swift Current came with financial risk for which the City had to take responsibility.

A report about the financial implications of the Canadian Cowboys Association (CCA) Finals rodeo was tabled during the regular council meeting, Dec. 12.

This loss consists of actual cash losses of $60,889.24 and facility revenue losses of $96,951.59. City General Manager of Community Services Jim Jones said this loss basically amounts to an annual City sponsorship of around $30,000 per year for the event.

The facility revenue loss is a calculation of the potential revenue income lost by the City during the period that the indoor venue was unavailable to other user groups while the ice surface at the InnovationPlex was converted for rodeo use.

Council members were subdued in their response to the report due to the inevitable nature of the decision facing them.

“As a business person, I don’t like the words write off, but I realize that this has to be done,” Councillor Leanne Tuntland-Wiebe said.

She thanked all the volunteers who helped to make the event a success over the years and this sentiment was echoed by Councillor Ryan Switzer. Mayor Al Bridal specifically mentioned the effort of City staff.

“Our City staff spend a tremendous amount of volunteer hours on this,” he said. “From the very top to the very bottom on all sorts of levels, there’s quite a few volunteers who came right out of our City staff here. So I like to thank all of them, besides all of the volunteers from our community.”

The City submitted a successful bid in 2015 to host the CCA Finals rodeo and the annual event moved from Regina to Swift Current in 2016. Jones referred to the broader economic benefits of the event for the community, including direct spending by event tourists at host facilities, hotels, restaurants, and entertainment venues. Most rodeo attendees were from elsewhere and attendance numbers indicated 10 per cent were Swift Current residents.

“According to the 2018 Regional Tourism Economic Impact Model, the CCA Finals rodeo in Swift Current generated a gross estimated output by tourists on local goods and services in the amount of $3.49 million with an estimated gross domestic product output of $1.75 million,” he said.

Average indoor attendance for the rodeo at the InnovationPlex was 14,066 people and hosting of the event took place with the help of over 400 volunteers each year.

A key reason for the City’s loss was the nature of the agreement between the three partner organizations. It was hosted as a partnership between the City, CCA and Swift Current Agriculture and Exhibition Association. The initial agreement for the period 2016 to 2019 was based on a profit-sharing partnership, but this arrangement changed in a follow-up agreement concluded in 2019.

“Universally, a new model for event hosting was shifting the responsibility of a successful event from the host to the municipality,” Jones explained. “Large events were requiring a guarantee of financial stability should there be a loss in any year of the event. In 2019, a shift in the agreement transferred the fiscal responsibility of the event solely upon the City.”

The CCA Finals rodeo did not take place in 2020 due to the COVID-19 pandemic, and there was still a lot of uncertainty over large indoor events in the following year. A decision was therefore made to move the rodeo outdoors to the Magnus Newland Arena at Kinetic Park for 2021, and the partners entered into a more realistic profit share agreement for this single year.

There was a capacity crowd at the outdoor rodeo, but income was less than it could have been due to a decision to reduce ticket prices from $32 each to $20 per ticket. Jones felt crowd attendance might not have been so good if ticket prices were higher.

Afterwards the City felt there was a need to renegotiate this agreement between the partner organizations to provide a more realistic financial outcome. It therefore decided to use the notice of termination clause to opt out of the agreement.

“The City’s decision to invoke the termination clause was enacted as part of good fiscal management,” he said. “With the COVID-19 pandemic, rapidly decreasing attendance and volunteers, it was felt that the City’s best interests were to at best renegotiate a new contract similar to the initial profit-sharing agreement.”

However, the CCA’s response to the City’s move was to look at alternative locations for future Finals rodeos. As a result, the event was moved to Saskatoon and the 2022 Finals Rodeo took place at Prairieland Park from Oct. 20-23.

The City will continue to look at opportunities to bring events to Swift Current, but it will also consider the hosting format.

“The new way that curling is doing their events is one that we think works, where the City becomes a sponsor as opposed to the person that’s responsible for any loss if there is a loss to the event,” Jones said.