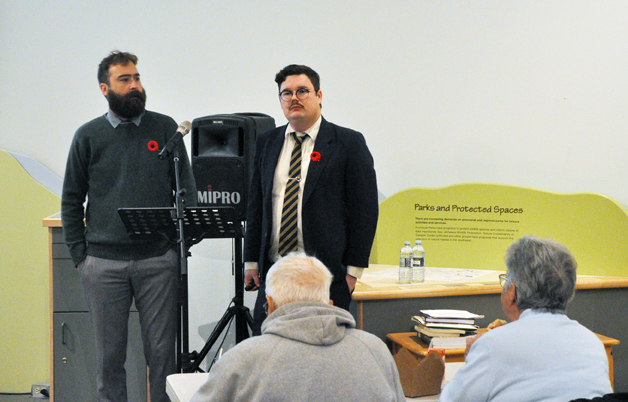 History teachers Chris Garner (at left) and Riley Sharp were the guest speakers during a lunch and learn presentation at the Swift Current Museum, Nov. 9.
Recent Posts
Recent Comments

Two history teachers shared perspectives about remembrance and talked about their involvement with the Lest We Forget project during a lunch and learn presentation at the Swift Current Museum, Nov. 9.

They also made this presentation, titled Remembrance: Reconstructing the Narrative, on Remembrance Day as guest speakers at the Royal Canadian Legion luncheon in the city.

Chris Garner and Riley Sharp teach history at the Swift Current Comprehensive High School. Both have a strong commitment to remembrance through their personal family connections and they noted this is the case for many other Canadians.

“I think most people in Canada would say that they have a connection with Remembrance Day through a veteran,” Garner said.

Garner’s great grandfathers served in the First World War and both survived. His great uncle died during the Second World War while serving with the Black Watch (Royal Highland Regiment) of Canada and he was buried in the Groesbeek Canadian War Cemetery in the Netherlands. More recently an uncle served with the Canadian Armed Forces during the 1990s.

Sharp’s great grandfather served in the British Army with the Durham Light Infantry and his great uncle was a Royal Air Force mechanic. His grandfather served with the Royal Navy during the Second World War. He therefore feels a duty to be a steward of this memory of service.

There are various reasons for remembrance, and their presentation added one that are perhaps overlooked. Remembrance Day is often seen as an opportunity to pay respect to those who served Canada during a time of war and it is felt that their actions helped to defend the rights and freedoms of Canadians. However, the sacrifices of Canadian soldiers were also made on behalf of the freedoms of others and for people who did not live in Canada, for example during the liberation of Europe in the Second World War.

“So for individuals who laid down their lives and sacrificed their lives for other individuals, how do we remember them on Remembrance Day,” Garner asked. “How do they fit into that narrative of those who served defending our freedoms?”

He referred to the example of the Black Watch (Royal Highland Regiment) of Canada during the Second World War. Black Friday on Oct. 13, 1944 refers to heavy casualties suffered by the regiment’s 1st Battalion during the Battle of the Scheldt in the Netherlands. All four company commanders were killed and there were just four survivors in one company of 90 men.

“So these are the sacrifices that maybe we don’t really recognize or realize, just how many Canadian lives were lost in the pursuit of liberty of another nation from tyranny,” he said. “I really did struggle to put words to that kind of sacrifice for a long time.”

History students at the Swift Current Comprehensive High School gain a better understanding of that individual sacrifice by Canadian soldiers through the Lest We Forget project.

It is an initiative by Library and Archives Canada through which students can access historical documents and databases to carry out primary source research about individuals who served and died in the Canadian Forces during the First and Second World War.

Sharp was introduced to the Lest We Forget project in 2017, and both he and Garner are big fans of this initiative.

“What’s key is we focus on the individual stories and the narratives that tell us about war,” Sharp said. “Every person who served in the war was an individual with their own background, feelings and experiences, and we often don’t think about the individuals.”

Garner mentioned that the use of primary source documents with a focus on individual soldiers will provide a different perspective on events.

“When we’re looking at the individual experiences and comparing it with the collective memory, there’s sometimes gaps on that,” he said. “What we remember and why we remember versus what was experienced don’t always line up.”

Students in Garner’s class will focus their research on soldiers from the Black Watch (Royal Highland Regiment) of Canada. Sharp encourages his students to look for a local perspective by selecting a soldier who lived in Swift Current or was born here.

“They always pick one soldier, look at their service records, and construct the narrative based on that and additional research,” Sharp said. “And I’ve been impressed by two things. One is that students have always been incredibly respectful and secondly is that students have often surprised me. Some students have taken the initiative to reach out and find living relatives of these soldiers.”

A wider benefit of the process is that students improve their research skills and they look more critically at sources of information.

“Comparing sources of evidence is really key, because even primary sources aren’t always true,” he noted. “People have subjective experiences, but if you read someone’s objectively and then learn a bit about them, you might say I see why he felt like it was this way, because this is what he experienced. So that’s his perception and by understanding his perception you can try and understand as close as you can to reality.”

Their research on individual soldiers who lost their lives during a war might also give students a different perspective on remembrance.

“When you have students present their findings to one another, I think that common theme of who are you actually sacrificing your life for starts coming out and maybe that’s a seed that gets planted in how they will remember,” Garner said.

According to Sharp it is necessary to continue to ask why do we remember and how should we remember.