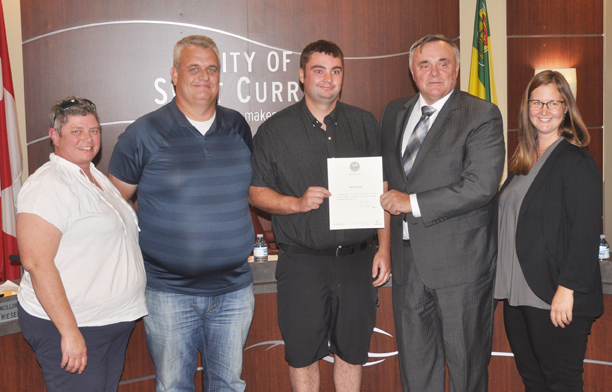 The mutual benefits of inclusive hiring to an employer and an employee experiencing disability are highlighted annually in October during National Disability Employment Awareness Month (NDEAM).

This month was also recognized in Swift Current with an official proclamation of Oct. 2-8 as Disability Employment Awareness Week.

The proclamation was made during a regular City council meeting, Oct. 3. SaskAbilities Swift Current Program Manager Jayda Watson and Partners in Employment Supervisor Jackie Powell spoke in support of the proclamation.

“DEAM is nationally recognized for the month of October across the country and we are excited to recognize and celebrate many of the inclusive employers that hired people of disabilities in Swift Current and southwest Saskatchewan throughout the month,” Watson said.

She noted that the Partners in Employment team in Swift Current is doing great work in the community to build inclusive communities for people of all ability.

“We know that there are more than 5.3 million Canadians living with some form of disability and that we have an untapped workforce right here in Swift Current and southwest Saskatchewan of job seekers of all abilities,” she said. “Partners in Employment locally supports over 1,300 job seekers each year within the community of Swift Current in seeking meaningful and sustainable employment. We assist businesses with recruitment of qualified jobseekers, including talent matching to the business’ needs.”

Partners in Employment works directly with employers to identify and match employment needs with available candidates of all ability.

The City of Swift Current is a beneficiary of the service offered by Partners in Employment. Details of a partnership between the two organizations were provided during the proclamation presentation.

The City participated in a pilot project with Partners in Employment to diversify the summer students employed by the Community Services division in the parks department. Watson spoke about the process that was followed to identify a suitable candidate for the position.

“Based on the job duties, the team at Partners in Employment was able to shortlist three candidates that would fit the job identified,” she explained. “We then had these three candidates interview with the hiring managers and the employee that was the best fit for the position was offered the job.”

The process continued after the successful candidate began to work at the City and Partners of Employment remained involved with both employer and employee.

“Support was provided by Partners in Employment from the pre-screening to on-the-job check-in throughout the summer that provided both the job seeker and his supervisor the opportunity to ensure that wraparound support was provided for a successful job match and job retention,” she said.

Tyler Servant was the successful candidate. He attended the proclamation presentation to speak about his experience as a City employee.

He began working for the City in early May. He was initially employed at the Janie and Helen Rempel Community Garden, but during the summer he was also employed at other locations, including at Memorial Park.

“Three months into the job I was on cloud nine,” he said. “The new skills and knowledge I’ve learned, I did not think it could get any better, but in August me and my co-worker got a different position driving around the city looking after the flower beds. My last day was supposed to be Aug. 30, but through hard work and dedication my last day was Sept. 30.”

While his summer position is over, he will continue to be employed at the City in a different position at the InnovationPlex. He will be responsible for cleaning duties and he will assist with tasks in preparation for curling and hockey games.

“I’m excited to continue working for the City and more learning opportunities,” he said.

Powell mentioned that Partners in Employment was going to continue to highlight NDEAM during the rest of October. Light it Up for NDEAM events were scheduled to take place in communities across Canada on Oct. 20, including in Swift Current.

Five businesses participated in a similar event held last year in Swift Current, and the participation in this year’s event will be at least double that number.

“The Light it Up campaign helps to raise awareness for people with a disability and the business case for hiring inclusive,” she said. “It also helps to grow your business, improving your relationships and raising your profile.”