Posted on 12 October 2022 by Matthew Liebenberg 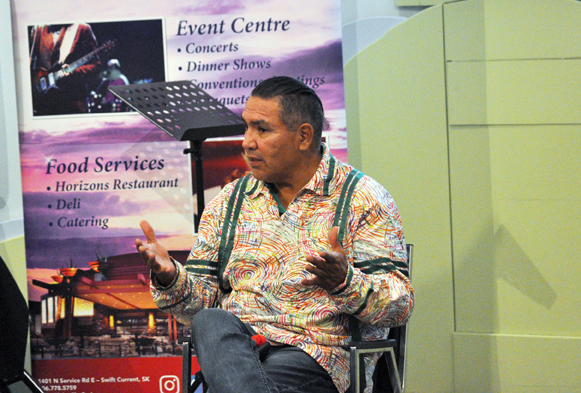 Knowledge keeper and storyteller Lyndon Linklater brought a message of hope for the future during a presentation in Swift Current about positive race relations and acts of reconciliation.

He was the guest speaker at an event hosted by the Swift Current Museum on Sept. 27, which was part of the 2022 Culture Days events in the city between Sept. 23 and Oct. 16.

He noted that reconciliation cannot just happen overnight, but it is a process that will take place over time involving several generations.

“Residential schools existed in Saskatchewan for 122 years,” he said. “Seven generations of our people went through that system. … So when we talk about reconciliation, it’s going to take a couple of generations, but I’m so hopeful of the future. I get heck from some people, because they tell me I’m too hopeful, but I can’t help it, because I can’t live my life being resentful. I can’t live my life being angry. It’s no way to live. I don’t want to live like that.”

He has an educational background in Indian Social Work, Indian Studies and some law. He discovered a talent for storytelling and enjoys doing it.

He has worked with many organizations in his role as a traditional knowledge keeper, including Great Plains College and the Holy Trinity Catholic School Division. He has been the Indigenous relations advisor for the Remai Modern art museum in Saskatoon.

His presentation in Swift Current was arranged through the Speaker’s Bureau of the Office of the Treaty Commissioner (OTC), which have speakers available to make presentations at events in communities across Saskatchewan. These speakers are knowledgeable about Treaty history, the Treaty relationship, and Treaty responsibilities.

“So I’ve been doing this for 22 years and I just love doing this, but back then we never called it reconciliation,” he said. “We just called it public education.”

His father, who passed away four years ago at age 79, spent 12 years at residential school. He initially attended the St. Margaret’s Indian Residential School at Fort Frances in northwestern Ontario for eight years. He spoke English well and as a result the school authorities decided to send him to the residential school at Lebret in Saskatchewan for his final four school years.

His dad wanted to become a teacher and attended the Moose Jaw Teacher’s College. He started teaching at the Thunderchild First Nation, where he met Linklater’s mother.

His mother, who is now 80 years old, attended residential school at Onion Lake, which is located about 50 kilometres north of Lloydminster.

She decided to run away from residential school at the age of 14 and walked almost 200 kilometres to her grandmother, who promised to hide her.

“Because she was raised by her grandmother, to this day my mom speaks her language fluent, which is plains Cree,” he said. “And she got to keep a lot of the traditional knowledge and the traditional values in our culture. It kind of remained intact.”

He noted that the Linklater family shares a lot of commonalities with other Indigenous people in Canada who went to residential schools.

“Every single person that went to those residential schools, they encountered and they suffered a certain degree of what we now call post traumatic stress disorder or PTSD,” he said.

He added that he is willing to argue this point with anyone, even if someone says they went to residential school and did not get PTSD.

“There are varying degrees,” he said. “Some really, really get it bad, and others it still bothers them, what they’ve seen and how it affected them.”

He mentioned that PTSD can put a person at risk to develop mental health issues and there is also a risk to develop alcohol and drug addiction. His father’s teaching career was ruined, because he drank a lot. He was able to find help, and he received treatment for alcoholism.

Linklater spoke about his own struggles with alcohol and drugs. He began drinking when he was about 14 years old.

“I was drinking heavily by 15, but my dad has sobered up already and then he kept talking to me and my older brothers,” he said. “In the end we followed suit. So for me, I’ve been sober for 41 years.”

He attended university in Saskatoon, where he learned about the history of residential schools in Canada. It was the start of a passion to learn more about his own culture and ceremonies.

“It started me on this journey,” he said. “So I started to get into what I’ve now become. I’m called a knowledge keeper.”

One of his skills include showing people how to raise a teepee, and he will attend schools and other places to do that.

“There’s lots of things I can do that First Nations people my age they just don’t, because they lost it,” he said.

He felt truth and reconciliation have become an important movement, similar to the Black Lives Matter and Me Too movements.

“People are coming together and what they’re saying is this is wrong, we need to change this,” he said.

Linklater said during a media interview after his presentation that he will continue to share his story and talk to people about truth and reconciliation.

“I was taught from my teachers and for me it helps me have meaning to my life,” he said. “For me, when I see people’s minds light up, the light bulb go off, it’s my reward. …That’s what keep me going. And I guess that’s part of the Treaty, that has to do with the Treaty that was made, and so I have a duty to try and continue that education, because if I don’t, it’s not going to happen.”