Posted on 8 September 2022 by Matthew Liebenberg 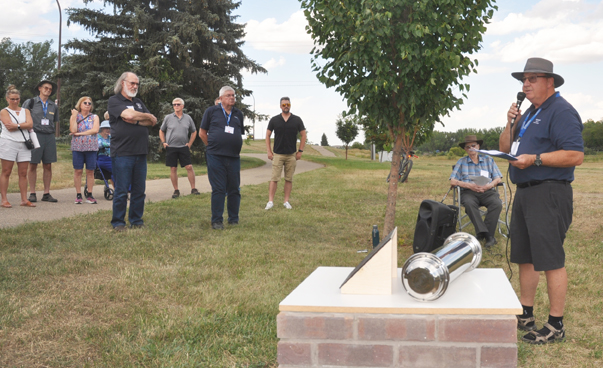 When future Swift Current residents wonder what life was like in 2022, they might find some answers when a time capsule is opened in 50 years from now.

The Kiwanis Club of Swift Current created a time capsule that will be opened after half a century on Aug. 14, 2072.

The club held a dedication ceremony for the time capsule at the new Kiwanis bike park, Aug. 12. The capsule will remain in a small brick monument at this location until the content is revealed in 50 years.

Allan Smith, the incoming club president, came up with the idea of a time capsule and he also served on the committee that worked out all the details. The other time capsule committee members were Emily Rempel and Lyle Simonson.

“It was sort of a thought that came to me and I wrote a letter to the board of directors and said maybe it would be a good idea,” he explained. “That’s how I ended up having to come back and work on it, because I suggested it. I think it’s quite meaningful, particularly when we get a plaque mounted on it as well. People in the city can then see who is involved and what’s involved here. And as has been said earlier by some of the people, Swift Current is pretty unique in the forethought that it has. The bike park is an indication of that and the skate park. I think it’s a good place to live.”

The new Kiwanis bike park is a joint initiative between the Kiwanis Club of Swift Current and the City of Swift Current. It provides a safe space for children to learn how to ride a bicycle and to get familiar with the rules of the road. It is located along the Chinook Parkway and next to 13th Avenue NE at Riverdene Park, just across the road from the Kiwanis skateboard park.

The time capsule was created in recognition of the 100th anniversary of the Kiwanis Club of Swift Current in 2021 and its contribution to the community. The club was supposed to host the 2021 Kiwanis Western Canada District Convention during its centennial year, but it was not possible due to the COVID-19 pandemic.

Instead, the club hosted the 2022 convention from Aug. 12-14 and the dedication event for the time capsule took place as part of the convention program.

The time capsule is a waterproof stainless steel cylinder. Its content will be preserved by replacing the oxygen inside the capsule with nitrogen.

“Fifty years from now, when this capsule is opened, it’s likely many of us who are here today will not be at the opening of that time capsule,” he said. “We hope that it’s contents will be interesting and provide an understanding and knowledge of what was accomplished in the past.”

The capsule is filled with a variety of information, including several documents about the club’s history. It also includes a flash drive with club pictures, a copy of the 2022 Kiwanis Western Canada District Convention time schedule, an official 2022 city map of Swift Current, 2021 Swift Current census information, and a 2022 uncirculated coin set.

Future city residents will be able to learn about the COVID-19 pandemic and the platinum jubilee of Queen Elizabeth II when the time capsule is opened again. A face mask might also be part of the capsule’s content as a reference to the global pandemic, but its inclusion depended on whether there was enough space for it to fit inside with all the other items.

Information in the capsule reflects the club’s role in the community. The club hosts an annual middle years youth wellness conference, and as a result the five middle years schools in the city were asked to contribute information for inclusion in the time capsule.

“There’s a lot of good background there for people,” Smith said about the capsule’s content. “I think when they see all of the events that we were involved in, it will be pretty surprising that a club could continue and produce as much effort as they did to make Swift Current a much better place.”

“The City of Swift Current and the Kiwanis Club of Swift Current have partnered on quite a few community projects over the years,” he said. “The Kiwanis bike park is the latest in a series of fantastic efforts from this service group, leaving a legacy of over 100 years in our city, providing youth recreational opportunities not just for generations to come, but in the past and in the present.”

“Look at what a span of 50 years has changed to today’s date, and then imagine 50 years into the future,” he said. “What will they think of our time capsule’s contents? It makes you wonder what they’ll think of Swift Current by then. I hope they will still value the spirit of volunteerism that Kiwanis does and I hope they will understand the impact of effective partnerships between service clubs and local government within their community.”

Kiwanis Club of Swift Current President Glenn Hanke spoke about the organization’s activities. He noted that it is one of the largest clubs in western Canada with over 70 members and it is able to fund various initiatives in the community.

“We’re proud to be able to support these extremely worthwhile initiatives and are so thankful that we have been able to remain such a healthy and active club in times when community service organizations are struggling, and we look forward to working with the community in the future,” he said.

Kiwanis member Elden Moberg, who emceed the event, felt the time capsule is more than just a tribute to the club’s past and its 100th anniversary.

“I think the time capsule is also a symbol of optimism for our club and our community moving forward for the next 50 years,” he said. “While we don’t know what the city will look like in 50 years, … and we certainly don’t know what Kiwanis Club of Swift Current will be in 50 years, we can only hope that both continue to flourish, provide opportunities for the people of this region, and for those that are interested in community service continue to put their efforts towards making Swift Current a great place to call home.”