Posted on 2 September 2022 by Matthew Liebenberg 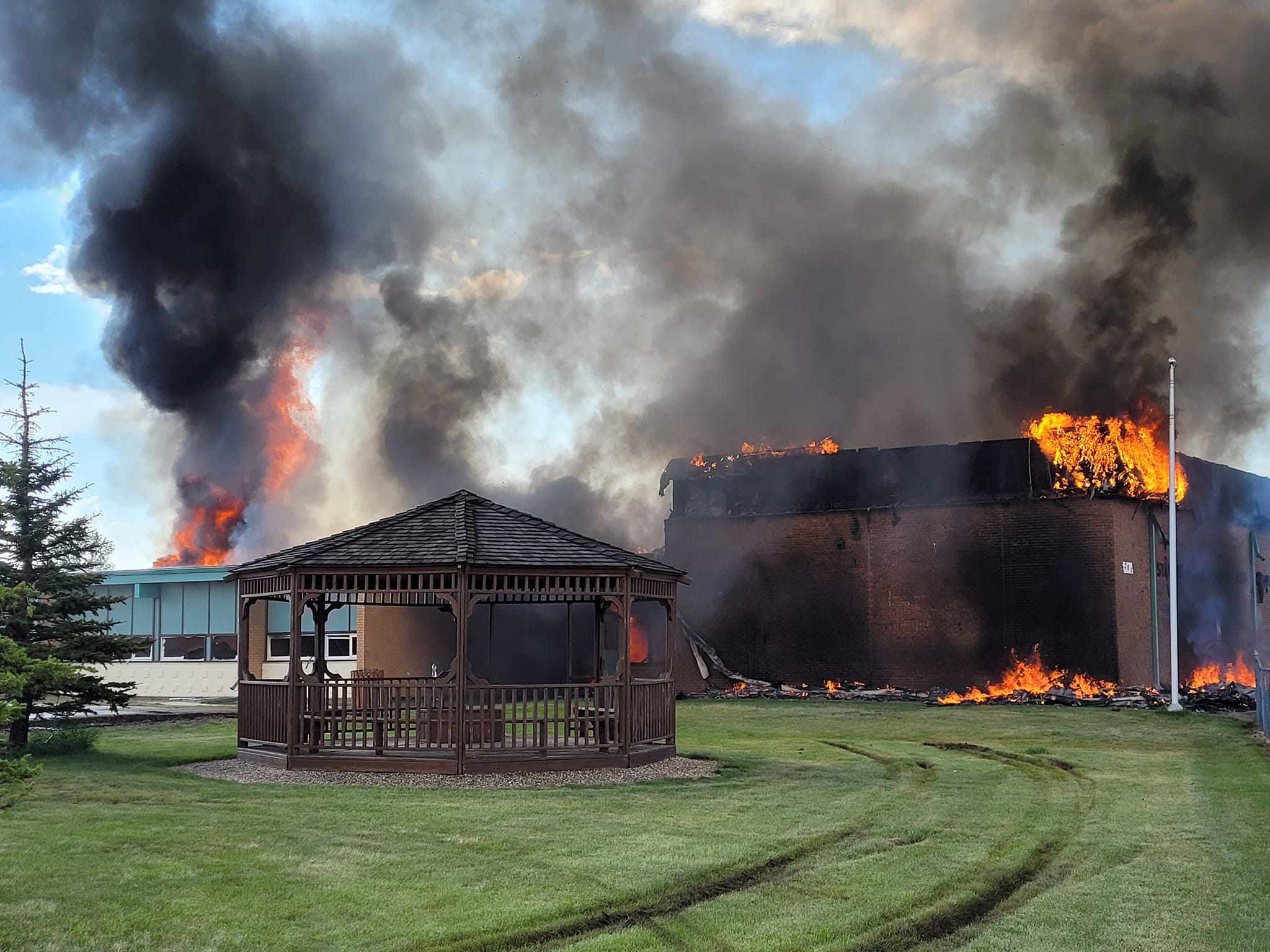 A bolt of lightning was responsible for the fire that caused the loss of the Stewart Valley School and Community Centre on Aug. 26.

The findings of a collaborative fire investigation by the City of Swift Current Fire Department and Saskatchewan Public Safety Agency (SPSA) were released Sept. 2.

The media release by the Swift Current Fire Department indicated the school was struck by one of 1,700 lightning strikes in the Stewart Valley area between 6 a.m. and 7 a.m. on Aug. 26.

“The fire started in the area adjacent to the east school entrance,” the statement noted. “The lightning bolt set fire to the roof insulating material, causing the fire to burn in an inaccessible void space between the school ceiling and roof.”

The SPSA and Swift Current Fire Department carried out a scene investigation and collected samples on Aug. 27. An off-site analysis of sample material was done on Aug. 29 and 30 by a SPSA provincial fire inspector, which made it possible for the investigation team to come to a clear conclusion that the fire was caused by a lightning strike.

Dan Barber, the fire chief of the R.M. of Saskatchewan Landing Fire Department, received a call at 6:45 a.m. on Aug. 26 that the fire alarm had gone off in the school building. He did not see any flames when he arrived at the scene, but there was a lot of smoke.

“It was the better part of the morning before we actually ever saw any flames,” he recalled. “We’ve seen heavy smoke coming out of the roof. The building was totally engulfed in heavy black smoke.”

The R.M. of Saskatchewan Landing Fire Department was assisted by the Swift Current Fire Department to battle the fire. Firefighters tried to enter the building, but the smoke was too thick and they could not see.

“It was so thick and they couldn’t find the flames,” he said. “So they kept pumping water on the flames and they kept going around and finally they had to start breaking some windows and starting throwing water into the sides. The fire itself was in the roof.”

The location of the fire between the roof and the building’s suspended ceiling presented a real challenge to firefighters.

“The fire was actually in the Styrofoam in the roof and there was no way of getting at it,” he explained. “It was just a slow rolling fire and eventually it finally broke through the roof and then we knew we had a major problem there and so then we fought the fire from there, but it just kept on going its way across the whole school in the roof underneath the tar paper on the flat roof. So it got over into the gymnasium and then it got into the roof of the gymnasium and it burned it out too.”

It was a terrible feeling for Barber to witness the destruction of the building where he went to school as a child. The school was built in 1963 and the community centre, which was also used as a school gymnasium, was constructed in 1983.

Hundreds of gallons of water were pumped onto the fire for hours on end and community members from the area responded to a call for water.

“It was just a continuous rolling pile of trucks coming through the parking lot all day into the evening,” he said. “So it was a community effort all the way through.”

It took over 14 hours to get the fire under control and thereafter firefighters continued to monitor the site for hot spots. An important goal during the very long day was to contain the fire and to prevent any further damage.

“We were lucky that we had no major wind show up,” he said. “We have a daycare centre that’s just next to the building that we needed to save and it didn’t get burnt. We had a farmer’s field right next to the yard and we were really fighting to make sure that we didn’t get any sparks out into that canola field. … The wind switched directions on us like all day long, because of the storms and the clouds. It rained on us four or five times during the morning, before it finally settled into heat for the afternoon and gave us a real hot day, which we didn’t need, but the biggest thing was to try and keep the fire contained so that it didn’t get into either the village or the farmer’s field.”

Barber expressed appreciation to all the volunteers from the area and the Swift Current Fire Department for their help.

“It’s just heartbreaking,” he said about the loss of the school and community centre. “It was just the hub of Stewart Valley. That’s why it’s going to be so important that we get something build back up again in order to keep that small town community going, because when you lose your school, you lose the heart of your community.”

Village of Stewart Valley Mayor Cary Thibert expressed his appreciation for the community’s response in a written statement to the Prairie Post.

“We were amazed how quickly the word went out and the community leapt into action [to] bring food and drink, but most importantly water to fight the fire,” he noted. “The community for miles around rolled in with truck after truck filled with water to douse the flames. As a council and village, we want to express our profound gratitude for all the help, concern, and effort made by all.”

There has been overwhelming support from near and far for the community, and he expressed hope that the community can get their school back again.

“Donations are being offered and can be received at the Village of Stewart Valley,” he stated. “A receipt will be provided and all proceeds will go to rebuild our community centre and to make the repairs needed to make the daycare functional.”

Stewart Valley resident Jennie Moen, who grew up on a farm just west of the village, said the loss of the school and community centre is devastating.

She personally witnessed the efforts of the community to save the building, and during the day she assisted by holding a fire hose to spray water onto the burning roof.

“The guy that was running the hose was exhausted,” she recalled. “I had no idea what it was like to hold on to one of those things for a long period of time and it’s an exhausting thing, but you cannot at least try to help. That’s just what everybody did.”

The sight of the effort by firefighters to battle the blaze motivated her afterwards to join the R.M. of Saskatchewan Landing Fire Department as a volunteer firefighter.

“We always know how important it is, but you don’t always realize it’s just time to step up,” she said. “We’re the younger generation coming in. It’s time for us to step up and make sure that we’re there to help.”

She has started to collect information about the school and community centre to keep memories alive about its meaning to the community. She asked people through her Facebook page to contribute photographs, videos and other information.

“There’s so much that was burned,” she said. “Everybody is hurting and I want to bring back some of the history and memories, and compile them and put them on a flash drive and print the pictures and put them in an album so that we have something.”

She is also spearheading efforts to start a fundraising campaign with a goal to ensure that the community will have a school and community centre again.

The new school year started on Sept. 1, but students from Stewart Valley School were unable to join other students in the school division.

The Chinook School Division indicated in a response to an enquiry by the Prairie Post on Sept. 1 that details were still being worked out and the intention is to get students from Stewart Valley back to school as soon as possible.

The Chinook School Division held a meeting with parents on Aug. 31. Feedback was requested from parents on different options for students to resume school. The Chinook Board of Education will make a decision based on the information received from parents.

In the meantime, Chinook School Division administration is dealing with matters such as building insurance. The school division’s emergency management plan was implemented on Aug. 26 in response to the fire and counselling was made available to staff, students and school families.