Posted on 1 September 2022 by Matthew Liebenberg 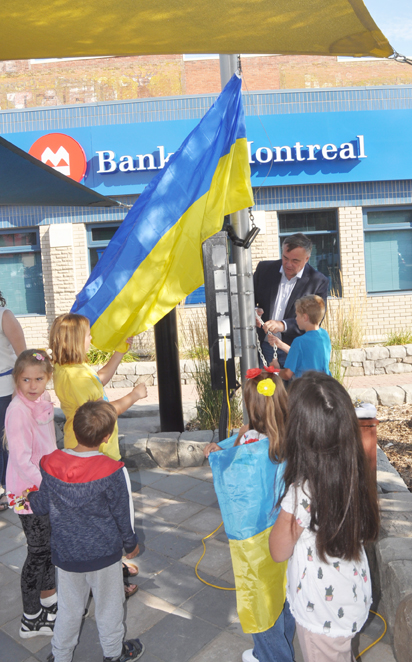 A flag raising ceremony was held at Market Square in downtown Swift Current on Aug. 24 to recognize the 31st anniversary of Ukrainian independence.

The event was arranged by the Southwest Newcomer Welcome Centre and Swift Current Mayor Al Bridal participated in proceedings.

There was a somber tone to proceedings, as this day was also the six-month mark of the Russian invasion of Ukraine. The event was attended by community members from Ukraine, some who have been living in the Swift Current area for some time and others who arrived recently after the war started.

Ukraine declared independence from the Soviet Union on Aug. 24, 1991. Canada was the first western country to recognize Ukraine’s independence a few months later on Dec. 2.

Mayor Bridal raised the Ukrainian flag during the short ceremony on Market Square and brought greetings on behalf of City council and administration.

“I’m honoured to be invited among the Ukrainian newcomers here today as you exhibit this patriotic pride in an environment that is safe, welcoming and supportive,” he said.

He made a reference to the recent Russian invasion, which is posing a threat to the independence and freedom of Ukraine as a country and nation.

“I will be remiss if I didn’t acknowledge that along with celebration today, there is also sorrow in Ukraine weighing heavy on many hearts,” he said. “Today marks six months of war and incredible hardships that I can’t imagine and none of us in Canada can. We share in these difficult emotions with you and we admire your hope, strength and courage in these tough times for Ukraine.”

He spoke about the deeper meaning of flags and anthems as symbols of civic pride and identity, which give them a special relevance.

“This sight of the Ukrainian flag flying in the wind, the melody of the anthem sung today, ringing out across the market, is both beautiful and bitter sweet, and hits right to the heart,” he said. “This city is proud to have you as residents and we gratefully celebrate with you today, and we do pray for the future of Ukraine. And just on a personal note, it’s hard to imagine what I see on the news and I can’t imagine with some of your families there and your loved ones there, and my heart goes out to you.”

Icasiana de Gala, the executive director of the Southwest Newcomer Welcome Centre, also spoke during the event. She noted that Ukraine’s independence was acquired not too long ago and she expressed hope for the country’s future.

“It’s a young independence, but kudos to Ukraine for claiming that independence, which now is being threatened again,” she said. “We hope that this war will be over soon so that those who are able to come home, can come home.”

She mentioned that the Southwest Newcomer Centre provides services to newcomers, including Ukrainians, and she expressed appreciation for those supporting their work.

“Thank you to the community and not just to Swift Current, but to the southwest community for providing that support, not just to Ukrainians but to so many other newcomers,” she said.

Serhii Zaplatin, who recently arrived in Swift Current, expressed appreciation on behalf of the Ukrainian community for this show of support. He is from the central part of Ukraine.

Daryna Shten, who has been a Swift Current resident for almost two years, sang the Ukrainian national anthem during the flag raising.

“We worry about our independence, that’s why we are here today,” she told the Prairie Post. “We would like to show people in Ukraine that all the Ukrainians all around the world support Ukraine and believe in our win. We will win and it’s really important for us and for people who stay in Ukraine now.”

She worries about the safety of her family and relatives in central Ukraine. Even though they are not currently in an area of the country directly affected by the war, there is always uncertainty about what might happen to them.

“My family is safe now, but in Ukraine now it’s not safe,” she said. “I’m talking with my family every day and in my mind always I’m afraid that my family is gone. It’s really terrible.”