Students receive recognition for Lest We Forget project

Posted on 6 July 2022 by Matthew Liebenberg 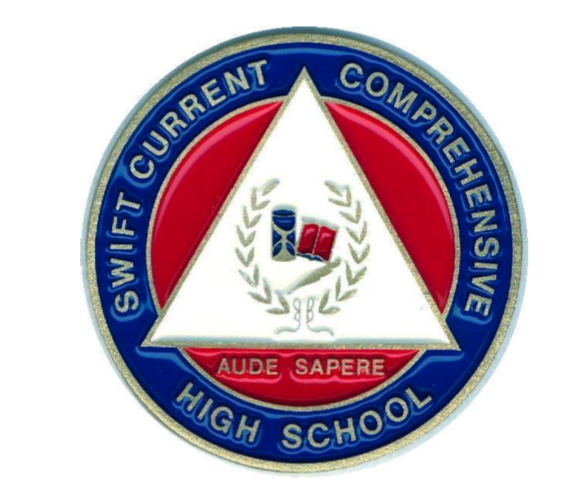 The extensive research work done by students in the History 30 classes at Swift Current Comprehensive High School (SCCHS) has been recognized by the military regiment in which these soldiers served during the Second World War.

Students carried out detailed research for their Lest We Forget project about soldiers who served with the Black Watch (Royal Highland Regiment) of Canada during the war.

The Black Watch is the oldest highland regiment in Canada and the regimental history can be traced back to 1862. It became aware of this project and formally recognized the students with an official letter from the commanding officer, a plaque, a copy of the regimental magazine, and a red hackle, which is a distinctive feature of the regiment’s uniform. It is a clipped feather plume worn as part of their full-dress headgear.

Const. Tony Curti, the RCMP school liaison officer at SCCHS, handed over these items during a special presentation to the students, June 20.

History 30 student Rachel Argue said afterwards it was certainly an unexpected surprise to receive this response from the Black Watch.

“It kind of reminds me that the work you’re doing is about real-world events and people, and that it’s not just a school project,” she said. “You’re remembering people and their sacrifices and being recognized for doing that is awesome.”

The students consulted a variety of online resources during their research, including primary sources such as military records of soldiers.

“We started going through that and collecting personal information about life before the war and reasons for enlistment, dates of enlistment, and then their military movements once they were with the Black Watch,” she explained. “That was sort of the first component to that, just learning all about the soldier themselves and what they did. And then we moved on to the war diaries, which is a collection of writings from the commanding officers that were actually there and shares about what happened during those battles and what happened in day-to-day life.”

In addition, the students consulted various secondary sources to obtain additional information about battles and the regiment.

History 30 student Brandon Blatz said he gained a new perspective on the sacrifices of soldiers through this project.

“It taught me a lot about people’s lives, all the terrible stuff that happened in the war, and also the success and what war was like,” he noted.

Both of them agreed it was fascinating to learn about the lives of soldiers, their reasons for enlisting, and about what life was like in the 1930s and 1940s.

“We made our own papers, each of us, and we selected a soldier to research and go through his whole life and his war experiences,” Blatz said.

For both students the most challenging aspect of the project was to decide how to use the large amount of information to tell the story of the soldier they were researching.

“You gather such an insane amount of information, like you’re learning about his hobbies and what he did for work and what years he worked for, and I wanted to do him justice by putting together a cohesive story,” Argue said. “So definitely that was the hardest part and I felt the most pressured to perform in that aspect.”

Black Watch Commanding Officer Lt.-Col. J.B.F. Roy referred to the experiences of these soldiers in his letter to the students. He noted that thousands of young Canadians volunteered for service when war broke out in 1939, and most experienced war far away from Canada and their communities.

“For the Black Watch, many of these soldiers – most not much older than you – gave their lives in service to their country,” he wrote.

He also referred to the importance of remembering their sacrifice and the contribution the students are making through their project.

“With each year that passes, time pulls us further away from the sacrifice these soldiers made,” he wrote. “That is why the work you have done is so important. Your project not only pays homage to those who served, but it also ensures that each soldier you research lives on, in our collective memory, for another generation to come.”

Const. Tony Curti has been participating in the History 30 Lest We Forget project since last year.

“I thought that was pretty cool and I thought why not give it a try and see if I could learn something too along with you,” he said during the presentation to students. “So last year I did it and this year I did it again.”

He decided to reach out to the Black Watch to make the regiment aware of the research project by SCCHS students.

“I did get hold of the administration officer in the Black Watch regiment and I told him what you guys were doing, and he thought that was pretty cool,” he recalled. “So he approached his commanding officer, Lt.-Col. Roy, and he took it a step further and wrote you guys a letter.”

Lest We Forget is an initiative by Library and Archives Canada through which students can get access to historical documents and databases to carry out primary research about individuals who served in the First and Second World War.

History teacher Chris Garner said students from two classes have focused on soldiers from the Black Watch over the past year and a half.

“And then every time we do it, it grows,” he explained. “So they’ve all had the same soldiers and they build off the previous one. So when they’re writing theirs, they’ll actually edit someone else’s. … So they’re collectively building a narrative of this soldier.”

He appreciated the manner in which students responded to the challenge they encountered to carry out such detailed research.

“I think after the last couple of years coming back, watching the dedication and just watching students wanting to be challenged and then taking that challenge and running with it, it’s great,” he said. “They’re learning that adversity is not an enemy. It’s actually something that helps you to develop character and through this project I don’t think a single student would come out of it and say they’re not better off doing it, even if they lacked interest in history.”

He added that students have realized the broader benefits of the research project to develop critical and creative thinking skills.

“A lot of the conversations is about how this is helping them for next year, if they’re going to university,” he said. “Just simple research and citation and building a narrative and understanding how all these different subjects work together to inform what we know. So it’s very rewarding to see students do that. … What I really like about this project is it builds that knowledge base and then from that, no matter what your interest is, there is something you can connect with and something you can relate to and once you have that connectedness or relatedness, you’re able to do a much better job with it.”