Posted on 29 June 2022 by Matthew Liebenberg 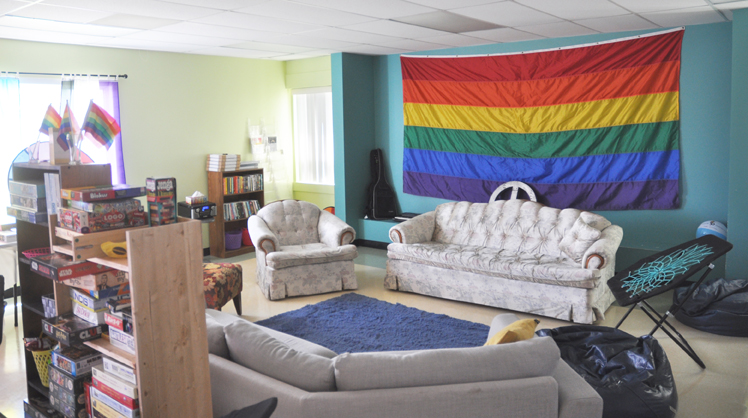 The grand opening of the Southwest Saskatchewan Pride drop-in centre on July 8 will be a highlight during Pride Week.
Recent Posts
Recent Comments

The upcoming Swift Current Pride Week will celebrate diversity and it will highlight the importance of an inclusive community where everyone feels welcome.

Pride Week takes place from July 3-9 and there will be a variety of activities to celebrate the return of in-person activities after two years during which the event had a mostly virtual format due to the COVID-19 pandemic.

Shaun Hanna, the interim board chair of Southwest Saskatchewan Pride, is looking forward to this year’s event.

Southwest Saskatchewan Pride aims to build welcoming and inclusive communities for 2SLGBTQ+ people and allies through visibility, partnerships and community events. It has been a challenge to achieve this during the pandemic and they therefore view this as a capacity building year.

“When a lot of your organization is focused around networking and connecting people face to face, and then you have to set that aside because of the realities of a global pandemic, you kind of lose a bit of steam in that networking piece,” he said. “So this year is a building capacity year where we’ve pivoted away from some of the networking stuff to projects for a Pride focus. The biggest project that we’ve taken on this year is starting up a Pride drop-in centre, an actual physical space in preparation for getting back to those networking and face-to-face events.”

The grand opening of the Southwest Saskatchewan Pride drop-in centre on July 8 will be one of the highlights of Pride Week.

“I think it’s really important to have a physical space where you can go to for resources, for support, and to meet,” he said. “That was one of the biggest challenges that we found in the last few years. We have a lot of resources available to us, but because we don’t have a physical space to keep them in, there’s more obstacles to deploy some of those resources to the community.”

The drop-in centre is located in the Dickson Community Centre at 751 Lorne Street West and he expressed appreciation towards the City of Swift Current.

“We’ve got an excellent relationship with the City of Swift Current, and having a physical space that’s on City property is one of those marks that Swift Current is really becoming an open and welcoming community for all sorts of people to come and work and live,” he said.

The drop-in centre has been open since early May. Southwest Saskatchewan Pride Treasurer Dawn Caswell said it took about six weeks to get the space ready. There was amazing community support and the furniture and a variety of items were donated.

She noted it has been a long-term goal of Southwest Saskatchewan Pride to establish a drop-in space and the opening of the facility is therefore an important milestone.

“We have relied on the kindness of others to allow us spaces to meet, whether its for a youth coffee house or an activity or event for adults,” she said. “We’ve always been able to count on others to provide that, but one thing we never had was a space to call our own where we could have people to our space and they could make it their own as well.”

The drop-in centre provides a location where various activities can take place and where everyone can simply feel at home.

“This is the space where youth come in and they hang out on the couches and they’re just comfortable,” she said. “This is a place that’s inclusive. It’s a place that they can say their names and their pronouns and they’ll be respected and there’s no friction. They don’t have to worry. So that was important to us, to have that space that we can all call our own.”

The soft opening of the drop-in centre took place on May 7 and there has been a very positive response and interest in the facility.

“We’ve had people drop in off the street, just because they want to check it out,” she said. “They love the colours, they love the space, they love how open and inclusive it is.”

One of the first activities during Pride Week will take place at the drop-in centre, with a family-friendly movie shown at 2 p.m. on July 3. The drop-in centre will be open all day on July 8 for the grand opening with various activities, including a tie dye extravaganza, a queer 101 presentation, and a tea party.

Southwest Saskatchewan Pride will have a float in the Frontier Days parade on Canada Day, and they will be handing out Pride Week passports along the parade route. These passports contain details about Pride Week activities.

Passports can be filled out whenever an event is attended and passport holders can be entered into a draw for prizes when they bring their passports to the Pride Week booth at Market Square on July 9.

“We have some great community support again this year for prize give aways,” Hanna noted.

There will be a Show your Pride photo contest during the entire week. It is an opportunity for participants to show how they celebrate Pride. There are entries in categories for best business, best personal/home, and best Pride pet. Images can be submitted during the week by e-mail to swiftcurrentpride@gmail.com and final submissions must be in by noon on July 9.

Pride Week will be officially proclaimed by the City of Swift Current and the Pride flag raising ceremony will take place on Market Square at noon, July 4. It will also be another opportunity to get hold of Pride passports.

The queer prom to celebrate graduates will take place at the Fairview School gym from 6-10 p.m. on July 5. There will be a supper with a program and guest speaker. Entry is $5.

Queer trivia night takes place at Lucky Charlie’s on July 6, starting at 8 p.m., to test the knowledge of teams. A free bowling night will take place at The Social Bowl from 6-8 p.m., July 7.

There will be a Pride Week booth at Market Square on July 9 and the Pride march will start at 12:30 p.m. at the booth, following a route in the downtown area.

Hanna noted the various activities during Pride Week are aimed at providing something of interest to everyone, and the event contributes to a greater sense of understanding and community.

“Obviously, there is a focus on the 2SLGBTQ+ community, but I always say that Pride really is for everybody,” he said. “When you come to Pride events, you get to see a lot of diversity. … When you know somebody, when you’re able to humanize and put an issue to a face or a human, then you realize they’re already part of your community, they’re already part of your support network and social network and it really helps to build that ecology of kindness within a community that we’re really trying to focus on.”