Posted on 16 June 2022 by Matthew Liebenberg 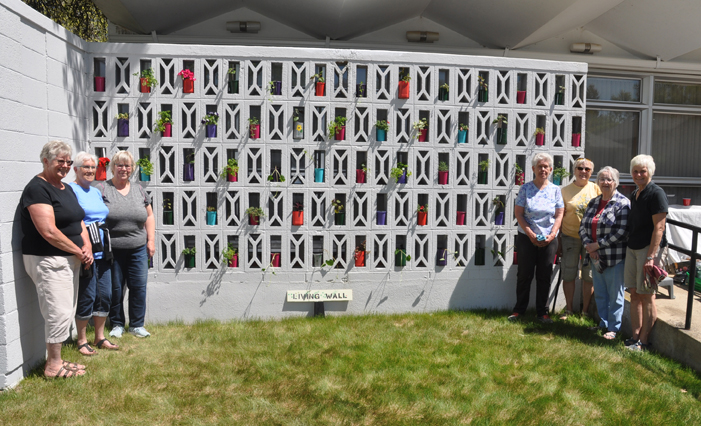 Members of the First United Church in Swift Current have created a living wall of plants as their latest green project.

They transformed a breeze block wall outside the chapel by placing flowers and herbs in colourful pots in the wall openings.

The project is carried out by Earthcare Partners, a working group formed by members of the congregation interested in the environment. Rose Lis envisioned this project and she was pleased with the outcome after pots were placed in wall openings, June 2.

“It’s something for the environment,” she said. “Just to be able to grow something and have something living and introduce some colour and beauty to this old wall.”

The group hopes to raise awareness about environmental issues through their projects and the living wall will be a visible reminder about greening the planet.

They also renovated the unused space between the wall and the building into a decorative Zen rock garden with a bench.

“It’s a nice quiet spot to come and sit down,” she said.

A variety of flowering plants and herbs were used to create the living wall. The wall’s appearance will change throughout the summer as the different plants grow larger.

“It was random,” she said about the selection of plants. “We thought some petunias, and we were given a lot. A lot of these plants were donated. We have beans, hopefully we’ll be able to grow something. We have lettuce in our pots, there’s parsley and different types of herbs too, so that some of it is edible.”

The one end of the wall is filled with pots of sweet peas, which is a climbing plant with attractive flowers.

“The sweet peas wall will look especially nice,” she noted.

The group received support from other members of the congregation, who donated plants, materials and their time. The work is not done, because volunteers will be helping out throughout the summer to water and fertilize plants.