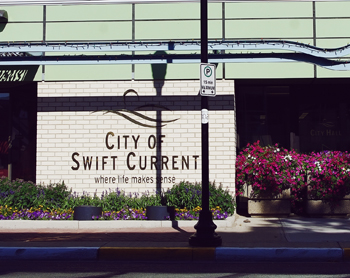 The production of liquified compost will be the next step in the City of Swift Current’s ongoing efforts to reduce the amount of organic waste in the municipal landfill.

A key component of the new contract is an initiative to produce liquified compost from the organic material received through the City’s yard waste program.

“The production of liquified compost will allow for use of compost in larger scale applications such as the agricultural sector and uses for the City’s green spaces,” City General Manager of Infrastructure and Operations Mitch Minken said.

The City’s composting program started in 2019 as a means to produce compost and wood chips from yard waste.

“The program has increased annual production, sales and successfully produced quality compost every year with no limitations for use as defined by federal compost regulations,” he said.

A key factor in the City’s decision to start this composting program was to use organic material from the yard waste collection program, which will save valuable landfill space and extend the lifespan of the existing municipal landfill.

The composting operations have been unable to use all the organic material from the City’s yard waste program. The excess yard waste material is stockpiled at the landfill, and the goal of the 2022 composting program is to use at least 3,600 cubic yards for compost, which has an approximate airspace savings value of $179,000.

The production of liquified compost will make it possible to increase the use of organic material from the yard waste program. The City already purchased about $30,000 of equipment for this purpose, which will be used by the contractor.

The new three-year contract was awarded to Giesbrecht, who submitted the only tender proposal. The annual cost of this contract will be $142,450 (PST exempt, GST excluded).

“In the past three years of composting operation, Les Giesbrecht has proven to be reliable, professional, and efficient, adapting to changing weather conditions, promoting the sales of the compost, and striving for a high-quality product,” Minken said.

Liquified compost production is scheduled to start in 2022 and it will be used on agricultural test plots for forage and cereal crops to evaluate its effectiveness.

The City’s efforts to divert organic material from the landfill towards compost production is also motivated by a potential future change in legislation.

“The landfilling of organic waste is known to contribute to greenhouse gas (GHG) emissions, with landfills producing 23 per cent of Canada’s annual methane emissions,” he said. “Methane is generally recognized as 25 times as potent of a GHG when compared to carbon dioxide. As regulations, surrounding GHG emissions continue to change, there is the future potential for financial penalties if yard waste were to be landfilled.”

“It wasn’t that many years ago, it’s probably back in 2013 or 2014, we used to have two fires a year where we were able to get permits from Sask. Environment where we would burn all this material off,” he said. “In those days it was acceptable, but these days those kinds of things are no longer acceptable and there was risk associated with that. Landfill fires are very dangerous and we didn’t want to get into that game. So there’s two components. The environmental piece, but also cost savings of not landfilling that material when it can be repurposed.”

The City recently announced some changes to the popular yard waste program. It continues to operate year-round at the landfill, but there is now only a single disposal location in the city from spring to fall.

In previous years there were two disposal locations in the city for residents to drop off yard waste from spring to fall. It has now been consolidated into a single site located at the recycle depot.

“It just became a little bit more difficult to run two sites and a little more costly to try and run two sites,” Minken explained. “So we made the changes. We had space and we thought we would take advantage of our contract with SaskAbilities and extend the hours a little bit and use the recycle centre.”

He does not anticipate that the availability of only a single drop-off location for yard waste in the city from spring to fall will have any impact on the use of the service.

“People have been quite committed and they truly appreciate having that opportunity to be part of this program,” he said. “So I think we’re going to be OK, even with the one site.”

Council members approved a scope change to the City’s 2022 asphalt and concrete contract with Mobile Paving Ltd. during the regular council meeting, May 16.

This change became necessary due to the need to add a top lift asphalt surface to Saskatchewan Drive in the Saskatchewan Valley subdivision. This will add an additional amount of $158,320.35 (PST included, GST excluded) to the cost of the contract.

Minken said the asphalt surface must be paved in two lifts during the development of a new subdivision.

“A 50 mm bottom lift is initially constructed, while the remaining 50 mm top lift of asphalt is scheduled after the majority of services are cut into the roadway, and most of the construction is completed in the area,” he explained. “Completing the top lift within the first few years of construction is essential to preserving the roadway structure.”

The new truck route bylaw received three readings and was approved during the regular council meeting, May 16.

The new bylaw clearly designates truck routes through the city based on the type of load carried by a vehicle and includes enforcement measures to ensure compliance.

The heavy vehicle route (Highway No. 1 and 4, North and South Railway Street) can be used for pickup and delivery of goods in the city. Trucks must follow the most direct way to a business location in the city when they leave this route.

The over-dimensional vehicle route (Highway No. 1 and 4, South Railway Street) is for loads exceeding standard dimensions and weights. The maximum clearances match with the Saskatchewan Ministry of Highways and Infrastructure standards. A vehicle that requires a permit from SGI will also need one from the City.

The dangerous goods route (Highway No. 1 and 4) must be followed by vehicles carrying materials considered dangerous goods in bulk, such as chemicals and fuels. These trucks can only leave this route to make pickups or deliveries.

The implementation of the new bylaw will include updated signage throughout the city and a communication strategy to share the details of the bylaw with organizations such as SGI, the Saskatchewan Trucking Association and enforcement agencies. The bylaw will also be posted on the City website for reference purposes and to inform the public and truck drivers of the changes.