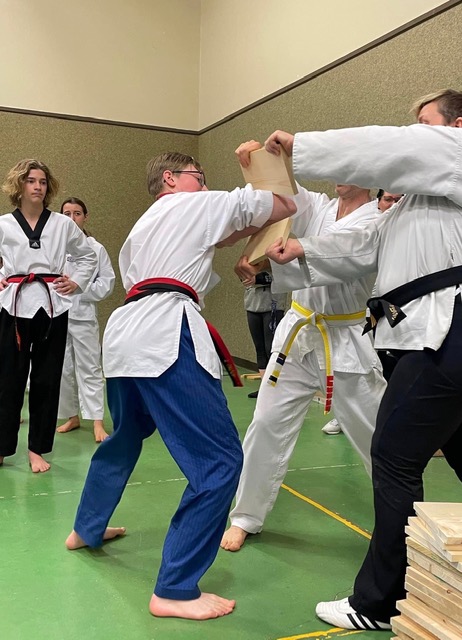 Swift Current Christian Taekwondo student Tate Unger breaks through a board with an elbow strike at “Breaking Boards for Freedom” on May 14. Nearly $17,000 was raised for International Justice Mission, an organization that combats slavery, human trafficking, violence against women and children, and other forms of abuse against people living in poverty.
Recent Posts
Recent Comments

Swift Current Christian Taekwondo hosted its annual Breaking Boards for Freedom fundraiser, presented by Alpine Dental, on Saturday, May 14. The event raised close to $17,000 for International Justice Mission Canada (IJM.ca) – an organization that partners with local authorities in 15 countries to combat slavery, human trafficking, violence against women and children, and other forms of abuse against people living in poverty.

“They do important work,” explained head instructor Gary Voysey. “None of which would be possible without donations and funding. We are proud to support this organization and know what we are doing here is making a difference.”

Students gathered pledges in an effort to support the cause and an online auction took place. Each belt level was encouraged to participate and thanks to board sponsors Anchor Dental and C + B Construction, close to 400 boards were broken using various Taekwondo techniques. One month of free Taekwondo classes and club shirts were awarded to Kya Yates and the Widdup family for raising the most money for the event.

“The continued support we receive from our students, their families and our sponsors is really incredible,” said Voysey. “We’ve been doing this for 9 years now, and over the course of that time, we’ve broken thousands of boards and donated nearly $90,000 to IJM.”

David Pollendine, Director of Development Growth for IJM Canada, was present to say a few words of appreciation to the crowd of 140 people. “I’m so happy to be here and experience this in person. I can’t believe that a Taekwondo school, in Swift Current, has been able to make this much of an impact on people around the world. It’s simply amazing!”

Refreshments, sponsored by Great Plains College, were available to enjoy and a door prize sponsored by Blue Hill Excavating Inc. was given away. Church of the Open Bible donated the use of their gym so that all proceeds could go directly to IJM.

Swift Current Christian Taekwondo was established in 2011 in Swift Current and currently serves over 110 members (ages 4 and up) each week through various classes. For more information, visit christiantkd.com.