Posted on 29 March 2022 by Matthew Liebenberg 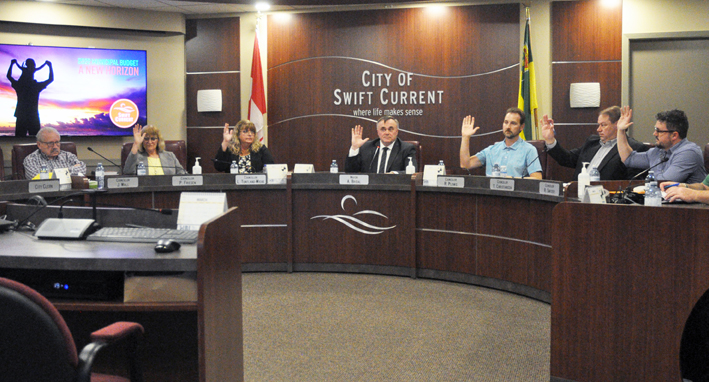 The City of Swift Current’s need for additional revenue to cope with various cost increases will result in a 2.15 per cent property tax increase for 2022.

The City’s 2022 municipal budget with the theme “A New Horizon” was approved during a regular council meeting, March 21.

“As this council begins year two of our mandate, we are embarking on the process of developing a new horizon that reflects the needs of our citizens and community while positioning us to sustain and enhance our quality of life for generations to come,” Mayor Al Bridal said during his budget presentation. “Our budget is a means to reach our new horizon. It allows us to direct resources to services and projects the community prioritizes.”

He referred to the importance of achieving the annual goals set by the City in the budget to ensure that priorities are met.

“Reaching our new horizon each year is imperative,” he said. “Failing to do so in any given year leaves us further behind in the following years, creating a compound effect that forces even tougher decisions down the road.”

“We will continue to take care of the vital infrastructure that allows our city to function and thrive, as well as adding new infrastructure in areas of need,” he said.

He highlighted several capital projects that the City plans to carry out during 2022. Significant work will be completed at the North Hill reservoir to add additional water flow and capacity for existing and future customers.

Other infrastructure projects include the roof replacement at the Aquatic Centre, traffic improvements at the Central Avenue North and Cheadle Street intersection, improvements to the storm sewer system to provide flood relief in the recently annexed west end of the city, and the implementation of mitigation measures in the downtown core to address localized flooding issues.

Bridal noted that the City is experiencing various budgetary pressures. The RCMP’s federally-ratified policing contract will result in an additional cost of $489,203 in 2022 and this extra cost will continue in 2023. This year’s cost does not include the retroactive pay, which is close to $1 million.

Other cost pressures include rising inflation, the increasing cost of goods and services, and higher gasoline prices. The increase in the federal carbon tax on April 1 will mean the City will pay an additional $89,353 in 2022 for a total cost of over $213,000.

“Having established the pressures faced by the municipality this year in 2022, which equates to an approximate 6.3 per cent increase in cost, we were faced with difficult decisions in order to finalize our budget,” he said. “This council has been clear in its mandate to reduce municipal debt and has no appetite to take on additional debt that will ultimately pass along to our children. We use it, we should pay for it, not our kids. In addition, our full review of projects and services indicate that we’re able to find significant efficiencies this year and we did not want to cut projects and service that will only mean compound pressures for future generations.”

Although the City was able to find efficiencies, it still needs to implement the 2.15 per cent property tax increase to raise an additional $418,250 in taxation revenue. He emphasized the City will continue to provide the same level of service to residents and these cost pressures will not result in any reduction in services provided to the community.

The City will continue to focus on debt reduction. The intention is to pay down approximately $5.75 million of principal debt for the period January 2021 to December 2022.

Six council members voted in favour of the 2022 municipal budget, but Councillor John Wall expressed his opposition and did not support it.

“I campaigned to return to council on a very clear commitment to the city taxpayers to keep City taxes affordable and as low as possible,” he told the meeting. “I made a commitment to our citizens who are on fixed income to remember them as I make decisions like this we make tonight. I cannot support a budget that increases the tax bill of our citizens, especially our citizens on fixed income. We live in a time of inflation, the likes of which we have not seen in decades. When these inflationary prices rise, the residents on fixed income have no recourse.”

He also expressed concern over the impact that these inflationary times will has on smaller businesses in the community.

“I believe we ought not to make it more difficult for our small businesses to remain viable,” he said. “I believe there are numerous small businesses that are having difficulty to survive. I know we cannot forever keep taxes flat. I do understand in the future there will be times a modest increase might be necessary. I believe that for this budget in these unprecedented times of inflation my vote in favour would represent me breaking faith with the commitment I made to the citizens of Swift Current.”

Other council members spoke about their motivation for supporting the budget, despite the 2.15 per cent property tax increase.

“I’m proud of what we’re presenting,” Councillor Ryan Plewis said. “It’s always unfortunate when there are tax increases, but in a world where costs are going up so much, this is in my opinion anyway a win for this community to be able to provide the same level of service and in a lot of cases to actually increase the level of services and to increase the number of things that are available to citizens through the course of this year and to do it in a way that admin is being able to bring to us is something that I can get behind.”

Councillor Leanne Tuntland-Wiebe felt it was pretty good that this year’s total budget amount of $83.3 million was basically unchanged from the previous year. She noted this is a budget that has needs in it and not wants.

“This was a budget to me that we kind of agonized over,” she said. “We didn’t want to see an increase this year and over the drafts that came out, the 2.15 was about as good as we could do and a lot of that had to do with the increase in policing services, which is a service to the community and I come from the aspect that services should be paid for by the residents of Swift Current. So I’m OK with that increase and that increase of 2.15 per cent doesn’t cover the increase for the RCMP.”

Councillor Pat Friesen felt this was one of the toughest budgets that City administration had to work on since she was first elected to council in 2012.

“It seemed like there were so many outside pressures coming at you that we really had no control over, such as the carbon tax or the policing contract,” she said. “There was absolutely nothing we could do about that.”

She added that two key factors made it possible for her to support the budget, despite the property tax increase.

“One is that we’re going to continue to keep the same levels of service,” she said. “That’s big for me. I would hate to see us have to cut programs and services. So that’s very important. And the fact that we’re able to pay down $5.7 million in debt is a big one for me as well.”

Councillor Ryan Switzer mentioned that other cities of a similar size in Saskatchewan faced similar pressures and they increased property taxes between two and six per cent.

Councillor Tom Christiansen said he shared Councillor Wall’s concerns over the property tax increase, but he felt there was no alternative.

“I don’t think we could have done it any better,” Christiansen said. “I’m happy we’re paying down debt and I think with anything thrown at us, as my colleagues have mentioned, it would have been very easy to say well we can just keep going with the debt a little bit to leave it as a zero per cent increase. I don’t think that would have been fair. I think this is the most fair and equitable way to handle it.”