Posted on 17 March 2022 by Matthew Liebenberg 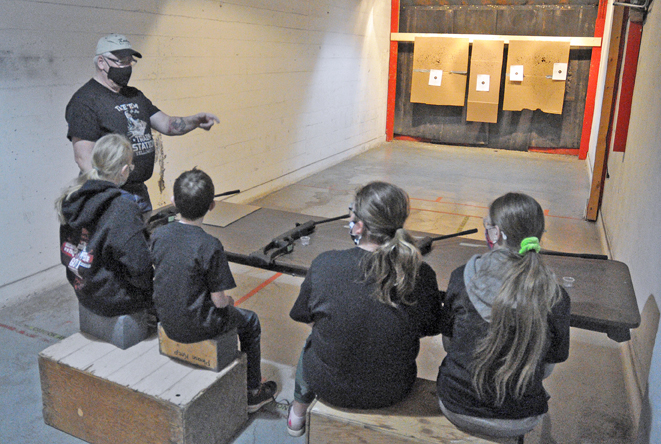 Instructor Andy Moon speaks to cadets before they use the air rifles on the shooting range, March 5.
Recent Posts
Recent Comments

The return of in-person training for the Swift Current Navy League cadets presents new possibilities for different events to keep them active for the rest of the program year.

A marksmanship day is one of the activities that became possible again as a result of in-person training.

“It’s a huge change,” she noted. “The kids are excited and we’re excited.”

The Navy League cadet program, which is open to youth 9-12 years of age, takes place annually from September to mid-June and there is then a stand down during the summer.

“We’ve got different events planned right until June and then we’ll have summer camp either July or August,” she said.

The COVID-19 pandemic situation has created a challenging situation for the Navy League program since last fall.

The marksmanship day was one of several activities planned for March that will ensure a busy time for cadets. Other events during the month include a fundraiser for the program hosted by Riya’s Family Dining and Getafix Auto Repair, first aid training provided by Cypress Advanced First Aid Services and a 12-hour drill-a-thon to conclude the month on March 26.

Mulhall noted the cadets can also look forward to a full schedule of events for the remaining part of the program until the summer break.

The marksmanship day included classroom training as well as an opportunity to get familiar with the use of the indoor shooting range located in the basement of the Lt. Colonel Clifton Centre. She explained the training fits in with the overall goals of the cadet program to offer activities that develop attributes of good citizenship and leadership in youth.

“The marksmanship is mainly to teach them the safety of it and it’s teaching them respect,” she said. “They need to respect this. They need to control this, and their own behaviours.”

Andy Moon of Swift Current, the co-chair of Navy League Saskatchewan, provided the training during the marksmanship day. He also serves as the Navy League’s senior range safety officer in the province.

He said the training in the use air rifles and correct conduct on a shooting range will have various benefits for cadets.

He is happy about the return of in-person training for the cadets, which will be an overall benefit for the cadet program.

“It’s very important,” he said. “Our corps that we have across Saskatchewan are down a lot this year. The more we can be in person and doing stuff and activities like range and things like that, our population grows.”