Campaign celebrates the contribution of women in southwest Saskatchewan

Posted on 16 March 2022 by Matthew Liebenberg 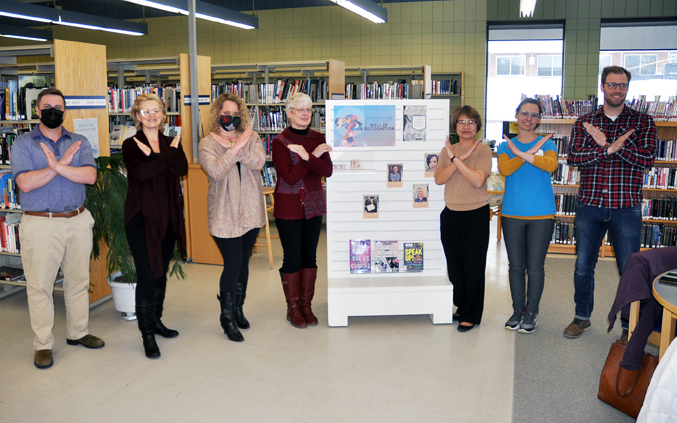 A campaign in support of a gender equal world is raising awareness through an initiative to celebrate the achievements and contributions of women in southwest Saskatchewan.

Several organizations in the region have come together to lead this campaign during March in celebration of International Women’s Day.

Representatives from different organizations held an event at the Swift Current Branch Library to announce details of the campaign, March 8.

Rebecca Anderson from Southwest Newcomer Welcome Centre emceed the event. She said they chose the International Women’s Day 2022 campaign theme Break the Bias as the focus of their campaign in southwest Saskatchewan.

“As part of this campaign, we encourage everyone to recognize a woman in their life who was able to break the bias and has embraced diversity and inclusivity, has celebrated our differences, and has worked towards equality,” she mentioned. “This woman can be your mother, wife, sister, teacher, coach, co-worker, and others who have overcome biases and barriers in their personal life, work, or career.”

Information about this campaign have been released on the social media platforms of the partner organizations. They are also distributing posters and cards with a QR code that can be used to download nomination forms.

Women who are nominated through this campaign will be featured on a wall of recognition, which is on display at the Swift Current Branch Library. This display will be at the library throughout March and information about women will be added as nominations are received.

“Our campaign started March 1 and yesterday I was fortunate to be the individual that contacted our first nominees,” Anderson said. “As I read their reasons for being nominated to them, I heard genuine gratefulness and appreciation. It was so rewarding and really made my day.”

“It’s really important to me, because I really believe in women mentoring women, both in business and in my private life, where I coach both women and girls in contact sports, which is not necessarily in everyone’s comfort zone,” she said. “So I think it’s really important to teach young girls especially that it’s OK to let their power loose and to enjoy that and that there’s nothing wrong with it.”

She has mentored many individuals during her career in business management in the retail industry and she has also done restaurant management. She is currently a business manager at Pioneer Co-op with responsibility for the family fashions department.

She enjoys the physical challenge of roller derby, but she was initially hesitant to tell people about her involvement with the sport.

Representatives from a number of participating organizations spoke during the campaign event about the importance of awareness efforts to break the bias.

“We all know that when women do better, everyone does better,” Family Resource Centre Executive Director Laura Beddome said. “And so it’s exciting to see all the ways that we can celebrate and uplift one another, and just continue to do better for ourselves and for those around us.”

Rebecca Donnelly, the executive director of Dorie’s House Treatment Centre and Southwest Youth Emergency Shelter, said women face challenges and barriers when trying to access services. This is partly due to the view of women as caregivers.

“Women who need help feel ashamed,” she noted. “They feel guilt that they haven’t been able to accomplish everything that they were supposed to accomplish in their role. In terms of breaking biases, my hope always is that everyone accesses the help they need, but that especially women who feel there’s barriers, whether from within themselves or from those around them, are able to reach out for help, that they understand that’s OK, and that there is help out there for them.”

Todd Vallee, the executive director of Canadian Mental Health Association Swift Current branch, noted that International Women’s Day has been celebrated for 111 years in one form or another and there’s still gender bias in people’s day-to-day lives.

“These biases don’t always show up at work or at home or in the community, and sometimes they can be hard to pick up on, but they do exist,” he said. “Progress has been made, but there’s a way to go and every inch gained by women today is an uphill battle. It’s events, campaigns and days of celebration like this that can help to break the bias here in southwest Saskatchewan and possibly join the cause of similar celebrations and create a positive ripple effect for women globally.”

Nathan Wiebe, the executive director of Swift Current Community Youth Initiative and The Center, felt it is really important to continue the conversation about how to break the bias.

Icasiana de Gala, the executive director of Southwest Newcomer Welcome Centre, said women’s issues are relevant to everyone and to all non-profit organizations. She shared the stories of three newcomer women who have overcome barriers to pursue their careers and dreams.