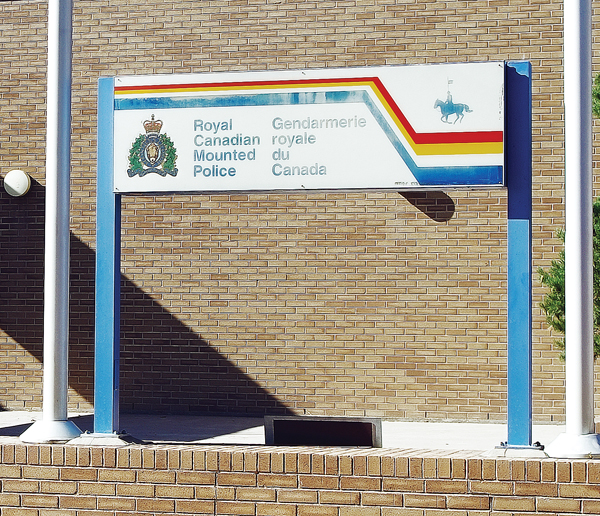 The following is a synopsis of calls for service for for the Swift Current RCMP as per the dates indicated:

4:40 PM – report of a male coming into the caller’s business accusing staff at the location of taking money from his vehicle during a service. The caller advised the male no one had taken his money but offered to give him what he claimed was missing. The argument between the two escalated and the male threatened to hit the caller in the face. The caller did not wish to have any charges pursued, only wanting the male to be given a warning. The male was given a verbal warning by police.

5:39 PM – while on patrol officers issued a ticket to the driver of a white Pontiac Grand Prix for holding their cellphone while operating a motor vehicle. The driver of the vehicle was also issued a written warning for failing to produce a driver’s licence upon police request.

7:03 PM – report of a suspicious, possibly intoxicated male standing in the middle of the road on 6th Avenue SE. Police made patrols but did not locate anyone in the area.

11:10 PM – while on patrol officers issued a written warning to the driver of a white Ford Edge for operating a motor vehicle with a suspended driver’s licence.

12:59 AM – report of a theft from a business on the 400 block of North Service Road E. The caller advised a male had attempted to pay for fuel and when his card didn’t work in the point of sale machine he advised he would return the following day to pay and left the location. Police spoke with the caller who identified the male to police and said this happened before. This matter is still under investigation.

5:38 AM – report of a suicidal individual. Police attended the individual’s residence but they would not come to the door. Police gained entry to the residence and were able to locate the individual inside, intoxicated. The subject was arrested under the Mental Health Act and once sober was transported to the hospital for evaluation.

9:07 AM – while on patrol officers issued a written warning to the driver of a black Volvo Van for failing to obey a stop sign.

1:37 PM – report of a collision in the alley of the 0 block of MacDonald Crescent. The caller was reporting his friend was driving a white Ford F150 and hit a garage and fence after skidding on a patch of ice. No one was injured as a result of the collision but the owner of the property was not home. The driver of the Ford was issued a ticket for driving at a speed that is greater than reasonable and safe.

2:24 PM – request to conduct a wellbeing check on the caller’s friend after receiving some concerning text messages. Police attended the residence and confirmed the friend was okay but had been having a bit of a disagreement with her mother. The friend stayed with the caller for the night to cease any further arguments.

3:09 PM – report of a suicidal individual. Officers attended the individual’s residence where they told police they just had neck pain and required a ride to the hospital. The individual was transported to hospital by EMS.

3:27 PM – 911 hang up call. The male caller advised he needed police and then disconnected the line and would not answer upon call back. The caller was able to be determined and police attended his residence. The male told police his female friend who was staying at a commercial dwelling unit on the 100 block of North Service Road W had overdosed.

Police and EMS attended the location and spoke to the female who was okay and on her way out, she had not overdosed on anything.

4:21 PM – report of a male driving a white GMC 1500 with a loud muffler making excessive amounts of noise when going past the caller’s residence on the 200 block of Herbert Street E. Several complaints have been received about this truck. This matter is still under investigation.

6:32 PM – 911 call from an establishment on the 1600 block of North Service Road E. about an intoxicated male following staff around the location and threatening to beat up the caller. Police attended the establishment but the male had left prior to their arrival and staff did not want anything further pursued. Officers located the male at his motel and gave him a verbal warning not to return to the establishment again.

7:56 PM – 911 call of a male “losing his mind”. The caller advised her parents were arguing and she was afraid of what might happen. Police attended the residence and spoke to the involved parties including the male who was intoxicated. During police investigation it was determined an assault did occur and during arrest the male resisted police. The male was able to be taken into custody and released when he was sober with a future court date. The male will be charged with one count of assault and one count of resist arrest under the Criminal Code.

10:27 AM – report of a suicidal individual. Police attended the individual’s location and were able to determine they were not a harm to themselves or others.

10:51 AM – report of an alarm at a location on the 100 block of 1st Avenue NE. The caller advised he had been in the entrance of the location and could hear an alarm going off. Police attended the location and confirmed the alarm to be false. No alarm was going off and no one was seen inside the building.

10:51 AM – report of an alarm at a residence on the 500 block of 4th Avenue NE. Police attended and confirmed the alarm to be false after ensuring the home was secure and were later advised by the homeowner the pet sitter had armed the alarm incorrectly.

11:02 AM – report of an alarm at a business on the 100 block of 1st Avenue NE. Police attended the location and confirmed the alarm was false after ensuring the business was secure.

3:44 PM – report of a male trapped under a vehicle on the 300 block of 10th Avenue NW. Police attended the location but the male had already been transported to hospital with non-life threatening injuries. First responders at the scene advised police the male had been working on his vehicle when it fell off the jacks and onto his forearm .

7:43 PM – report of a hold up alarm at an establishment on the 500 block of North Service Road W. Police attended and confirmed no emergency was taking place, a staff member had pressed the alarm button by mistake.

8:27 PM – report of an adult female jumping out an ambulance while being transported to the hospital after receiving narcan for an overdose. Police were familiar with the female but were unable to locate her in their patrols of the city.

11:02 PM – request from Brooks RCMP Detachment to conduct a wellbeing check on a female after she contacted them asking they do a check on her son because her music was telling her he needed help. Police attended her residence and confirmed she was okay.