Posted on 9 February 2022 by Matthew Liebenberg 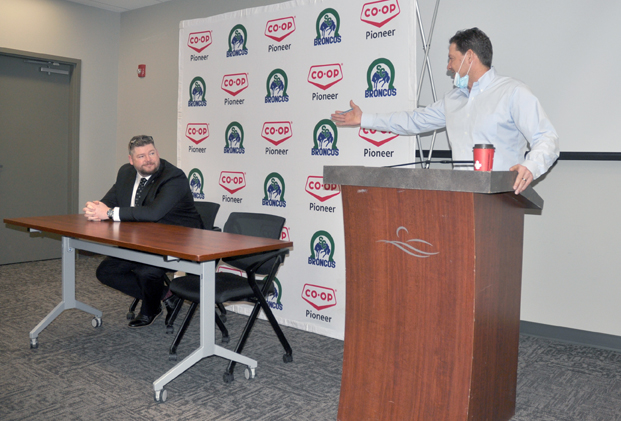 The Swift Current Broncos has given the thumbs up to Chad Leslie as full-time general manager of the organization.

Broncos Board Chair Trent McCleary made the announcement during a media conference at the Innovation Credit Union iPlex, Jan. 31.

“The Swift Current Broncos are proud to announce that we’d like to welcome our ninth general manager,” he said. “Chad has been with the club four years. … We’re very happy to reward him for his efforts to the general manager’s position. Chad has a very strong aptitude for player identification and we’re very happy with the direction the club is going.”

He thanked the Broncos board for providing him with this opportunity to be the full-time general manager of the team.

“Certainly, it’s one that I take very seriously and I’m quite honoured to be in this position,” he said. “I think moving forward, our group is trending in the right direction. We have great leadership from the coaching staff there with Devan [Praught]. Our scouting group is solid. We feel like our board is very supportive of what’s going on in this situation right now and based on where we’ve been and where we are right now currently, we feel pretty positive about the direction we’re going.”

The Broncos is following a different approach to the management of the team with the appointment of Leslie as general manager while Praught continues in the role as interim head coach.

McCleary noted the team did not have a standalone general manager since Brad McEwen in the early 2000s. It was the standard approach to combine the role of general manager and head coach, but in recent years it became increasingly apparent this was not practical anymore.

“We just noticed over the years, especially with Dean and especially with COVID and the world that we live in now, it’s such a huge position as general manager and as coach that the board of directors felt it was necessary to split the roles due to the workloads,” he said, “It was almost unbearable, the workload, because you’re in a general manager meeting, then you’re coaching, and so it was apparent that we needed to split the roles. When Dean left it was the perfect opportunity for us, because Chad was in the role as assistant GM and Devan was as the assistant coach. So then it just naturally morphed into those positions and we’re very comfortable as it works right now.”

Leslie has experienced all facets of the game in different roles over the years. He played three seasons in the Saskatchewan Junior Hockey League from 1995-98 with the Lebret Eagles, Flin Flon Bombers and Estevan Bruins. Thereafter he played a year of university hockey in Brandon and a year of minor professional hockey with the Lake Charles Ice Pirates.

He then moved over to various roles in hockey management. He joined the Estevan Bruins in 2008, where he was initially hired to take notes during games and to do video work. He was then hired as the team’s assistant coach for 2009-11 and he was the interim head coach for 2010-11.

He joined the Virden Oil Capitals in the Manitoba Junior Hockey League for the 2012-13 season, where he started as director of player personnel. He stayed with the team for several seasons and worked as an assistant coach and then became the assistant general manager.

“I’m proud of the group of scouts that I have in regards to how hard they work, the commitment level they have,” he said. “I’m proud of our coaching staff. I think they’ve taken it to the next level in regards to giving us some structure and a baseline for where we want to go, how we want to be identified as a team and individual players as well. And then just the players themselves. Extremely proud of how they’ve developed here in recent years. I know you’re always gauged on results, but for me the way the team has played this year, we can be down early in games and the guys claw their way back. They play, for the most part, 60 minutes most nights. In the past we haven’t seen that. … So I’m proud of the guys for taking that step and I think it’s based on their commitment, their character, and their compete.”

He felt his background provides him with a good understanding of a hockey operation, which will be useful in his role as the team’s general manager.

“I think having been a coach gives me some insight into the day-to-day dealings as a general manager with the coaching staff, having ran scouting groups before,” he said. “I will continue to run our scouting group for the immediate future, but certainly the interaction as a general manager that I’ve had in the past with other groups also has given me some experience, and you’re going to learn as you go, obviously. I mean, just every step up you take there’s a learning curve and fortunately for me I’ve had a lot of people reach out, offer some support, and any time you have that opportunity to listen to people, everybody has something to offer. So for me it’s always constant learning, constantly trying to get better.”

He considered it essential to build the team through the drafting and development of players, and trying to keep trades to a minimum.

“The one thing I’m grateful for is the board has given me the flexibility to handle the things that are most important for our franchise at this point in time, and with Devan here I feel very comfortable in taking off and going on road trips and scouting,” he said. “I know the team is in really good hands with our day-to-day staff as well as business people. Everybody here pulls the rope the same way.”

Managing a hockey team during a pandemic presents additional challenges, but he felt positive about the team’s future. He credited the effort by the Broncos business staff to keep fans engaged.

“Our support corporately has been tremendous,” he said. “Obviously our fans are fantastic. I think that without them we would be in real trouble in this pandemic scenario, but for us it’s just something that everyone is dealing with. We just have to forge ahead and continue to try to do things the right way and get the messaging out there. Consistency I think for us moving forward is the most important thing as a franchise. We’re starting to see it with the on-ice product and I think that’s going to help by bringing people back to the rink in due time when the pandemic allows. I think that we’re starting to hear some buzz in regards to the young players that we have on the draft prospects scenario with the NHL central scouting list and all of that. So for us it’s just an opportunity to continue to move forward.”