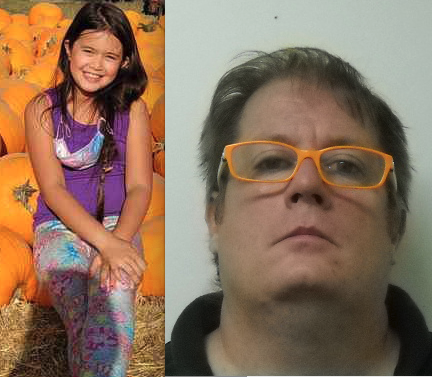 On Jan. 21, in consultation with crown prosecutors, the Saskatchewan RCMP charged Michael Gordon Jackson with one count, abduction in contravention of custody or parenting order, contrary to Section 282(1) of the Criminal Code. Additionally, investigators obtained a Canada-wide warrant for Michael Gordon Jackson’s arrest. Court Information # 90457919

Investigators believe individuals may be aiding or assisting Michael Gordon Jackson in evading police.  It is important to remember this activity may result in criminal code charges.  Individuals with information related to this are asked to contact police or report information anonymously to Crime Stoppers.

We are also seeking the public’s assistance to help locate his daughter, 7-year-old Sarah Jackson, who is believed to be with him.

“Sarah: we want you to know that you are not in any trouble,” said Chief Superintendent Tyler Bates, Officer in Charge of the Saskatchewan RCMP South District. “Your mom misses you very much and we have police officers doing what they can so you can see her again soon.”

7-year-old Sarah Jackson is described as being Filipino/Caucasian, 4 feet 2 inches tall, 76 pounds with long, waist-length brown hair that is all one length with no bangs. She has brown/hazel-coloured eyes and last had teal-coloured eyeglasses that she wears most of the time. A photograph of her is attached.

Since January 5, when an enforceable court order was issued, investigators have followed up on several tips and reported sightings of Michael Gordon Jackson and his 7-year-old daughter, Sarah Jackson.  Every one of these has been thoroughly investigated and police officers have determined all sightings reported to police were not Michael Gordon Jackson or his daughter. This included officers attending to multiple businesses to view surveillance video.  Investigators are ensuring Sarah’s legal guardian is aware of all steps officers are taking to locate the child. Additionally, officers continue to work closely with and consult with crown prosecutors as well as other government and community partners.

The Saskatchewan RCMP continues to ask for the public’s assistance in locating Michael Gordon Jackson and his 7-year-old daughter.

At this time, the criteria is not met for an Amber Alert. Investigators continue to assess the circumstances and information related to this file on an ongoing basis and as new information is reported to the police.

Michael Gordon Jackson is described as a 52-year-old male, weighing approximately 250 pounds with blue eyes and dark brown hair.  He typically wears glasses.  He does not have a known vehicle.  He resides in the Carievale, Saskatchewan area and may have connections to the communities of Dilke, Oxbow, Alameda, Regina, Saskatchewan and Lamont, Alberta.  However, he may be in other communities.  A photo of Michael Gordon Jackson is attached.

Anyone with information about the whereabouts of Michael Gordon Jackson or his daughter are asked to call the Saskatchewan RCMP at 310-RCMP (7267) or (306) 780-5563.  Information can also be submitted anonymously to Crime Stoppers at 1‐800‐222‐TIPS (8477) or http://www.saskcrimestoppers.com.