Posted on 7 January 2022 by Matthew Liebenberg 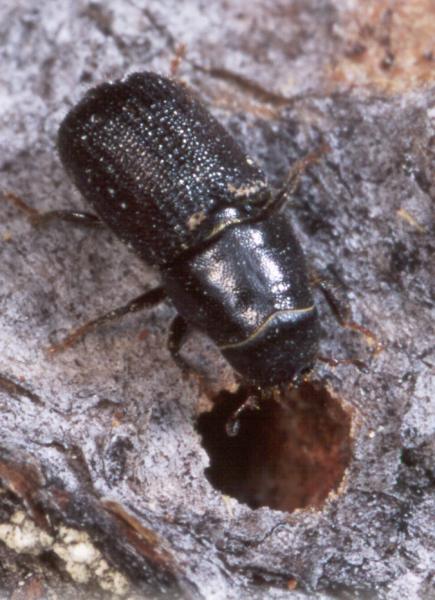 The number of trees infested with mountain pine beetles in the Cypress Hills increased in recent years and tree removal in 2021 was almost at the same level as eight years ago.

There is an established mountain pine beetle population in the lodgepole pine forests of the Cypress Hills and it remains the only area in Saskatchewan where these wood-boring insects currently occur.

There are ongoing management efforts by the Ministry of Environment and the Ministry of Parks Culture and Sport to control beetle activity in the Cypress Hills. There is also close cooperation with Alberta to stop these beetles from spreading into Saskatchewan’s vast northern forests and the two provinces recently renewed an agreement to combat this threat.

Dr. Rory McIntosh, the insect and disease expert for the forest service branch of the Saskatchewan Ministry of Environment, said the goal is to use effective management procedures to control and limit the mountain pine beetle population in the Cypress Hills.

“They have established, whether they co-evolved with that lodgepole pine forest or whether they have been introduced, and because it’s an island forest they have now created that as a natural niche,” he explained. “It is continuing to simmer in the Cypress Hills. Eradication is not likely.”

The mountain pine beetle is native to western North America, but it has been spreading eastwards beyond its historic range. Adult beetles will fly to new trees during July and August, and the colonization process starts when female beetles release chemicals called aggregation pheromones to attract other beetles to a tree.

Female beetles will tunnel into the inner bark of a tree to lay their eggs in vertical galleries. Hatched larvae will overwinter on their tree hosts. Mature larvae will excavate cells for their pupal stage, and the pupae will transform into adult beetles in June and July.

The death of attacked trees are caused by the wood-boring actions of the beetles as well as by infection with blue stain fungi, which are spread to different trees by these beetles. Trees will produce a toxic resin as a defence, but it might not survive a mass attack by these beetles. Pitch tubes on the outside of the bark and sawdust around the base of a tree will be visible evidence of an infestation.

“Eventually the tree will start to wilt and then it turns to red, and then after a few years the needles drop off,” he said. “Typically, the older the pines, the more susceptible they are. So about 80 to 120 years old is when the pines are most susceptible.”

A tried and tested method is used to manage and control the mountain pine beetle population in the Cypress Hills. It consists of early detection through aerial and ground surveys as well as a rapid fall and burn response to destroy infested trees.

“When you fly the aerial surveys, the only way you can detect where they are on the landscape is by locating red trees,” he said. “We use those red trees to trigger detailed ground survey plots, where we send crews on the ground. They either do strip surveys or they’ll do concentric surveys using that red tree as the centre, the premise being that beetles that came out of that tree would fly and colonize adjacent to it or not too far away from it. That way you try to identify where the current year’s attack is and you mark them for removal, and that winter people go in and fall and burn them.”

A significant mountain pine beetle infestation occurred in the Cypress Hills during the early 1980s with the peak year in 1982, when 2,222 trees were removed. That outbreak collapsed shortly thereafter due to an intense control effort and colder winter temperatures.

“Since then it was fairly quiet and then in 2006 we started to detect some beetle activity in the Cypress Hills Interprovincial Park,” he noted. “This was in alignment with the whole western continental outbreak that occurred around the late 90s and early 2000s in British Columbia and the United States.”

That increase in beetle activity reached a peak in 2013, when 484 trees were removed. Thereafter the infestation declined for a four-year period from 2014 to 2017, and the number of destroyed trees dropped to just over 100.

“We’re almost back up to the 2013 peak,” he said. “We hope that this increasing trend doesn’t continue, but the crux of it is early detection and rapid response. In the event of doing nothing, that increase would have continued from 2013 until almost all of the lodgepole pine have been killed.”

The majority of infected trees have always been in the West Block wilderness area of the Cypress Hills Interprovincial Park. During the previous peak in the Centre Block a total of 49 trees were removed in 2014 and 10 trees had to be destroyed in 2021.

The identification and removal of infected trees on land very close to the Centre Block in 2020 helped to ensure that the mountain pine beetle population is under control in that part of the Cypress Hills Interprovincial Park.

“There were quite a few trees on that property and because of the high value of the Centre Block and the infrastructure in Centre Block, it posed an enormous risk,” he said. “So we did go in and we assisted that landowner with control of those trees. Similarly, we do have agriculture lease lands that abut the Cypress Hills area and we do control trees on those lands too. It’s important to try to address it on an ecosystem concept. Where the pine forests are, is where the risk is.”

The recent overall increase in mountain pine beetle infestation in the Cypress Hills is worrisome, but it is still fairly low in comparison with the outbreak that occurred in the 1980s.

“I’m cautiously optimistic, I guess is the best way to put that,” Dr. McIntosh said. “I have seen that slope of the increase being considerably higher in other areas. We’re still less than doubling the population of the removals each year, which would suggest that we’re getting a high level of mortality in the local beetle population. So we’re holding it fairly steady there, but that’s not to say that an extreme climate condition wouldn’t be very helpful.”

The survival rate of these beetles will be higher when winter temperatures are mild and when summers are warm and dry. Climate change will therefore have an influence on their future population numbers.

“In an ideal world, a really cold November that would make it difficult for the beetles to prepare for overwintering, is often better than a deep winter deep freeze,” he said. “What we’re looking for is extreme cold temperatures over a number of years. That really contributed to slowing the spread in the north.”

Ministry of Environment surveys were done this fall and no mountain pine beetles were detected in Saskatchewan’s northern forests. There is an elaborate detection system of tree bait sites on both sides of the border between Alberta and Saskatchewan to identify any beetles. These traps use aggregation pheromones as bait to attract any beetles that might be in the area.

Beetles have been detected within 40 kilometres of the Saskatchewan border. This trap site was located within the Alberta side of the Cold Lake Air Weapons Range, but beetles have not been found there recently.

“There have been no beetles found at any of those trap sites on the Alberta side, because of those two cold winters,” he said. “They moved the traps this year a little bit further west, because they’ve had three years of no beetles in any of their traps. So obviously their eastern edge is further west. … That’s good news, but on the other hand cautious good news, because if we don’t have a deep freeze type winter this year, your populations can rebound very quickly.”

There was an announcement in early December of the renewal of an agreement between Saskatchewan and Alberta to battle the mountain pine beetle. This agreement began in 2011 and since then Saskatchewan has provided nearly $7.3 million to support beetle control efforts in Alberta.

“It’s precedent setting in that there’s not many jurisdictions that can say they were forward thinking enough to invest in prevention of something spreading into the province rather than reacting as soon as it gets here,” he said. “We feel there are great benefits to investing in slowing the spread in Alberta.”

In the meantime, the ongoing efforts to control the beetle population in the Cypress Hills will ensure that such expertise is available if required for use in Saskatchewan’s northern forests.

“We would then be in a position where we would have to react,” he said. “It would be a simple tree treatment, just like we do in the Cypress Hills. In some respects, we’re developing some knowledge and expertise in our experiences and in our work down in the Cypress Hills.”

The Cypress Hills is an isolated forest area within the prairie landscape of southwest Saskatchewan, but there is still concern that the mountain pine beetle might spread from there. A Saskatchewan ministerial order therefore makes it illegal to transport or store pine logs and pine forest products with bark attached that came from the Cypress Hills area.

Dr. McIntosh said local residents of the area and visitors to the Cypress Hills can play a role in the battle against the mountain pine beetle.

“One of the main things that people can do is not move firewood around,” he emphasized. “That is the major source of long-distance dispersal of most forest threats, whether they be mountain pine beetle or gypsy moth or anything. … And the second one is more citizen science, eyes on the ground. We can’t be everywhere. So if people see things, if they see pitched tubes, even if they see them in the area around there, for example if you see them on your pine shelterbelt, those kinds of things are useful for us to know about.”

Source note: Additional background information about the mountain pine beetle was obtained from the Natural Resources Canada and Government of Saskatchewan websites.