City debt set to increase, but no rate hikes for Swift Current taxpayers

Posted on 8 December 2021 by Matthew Liebenberg 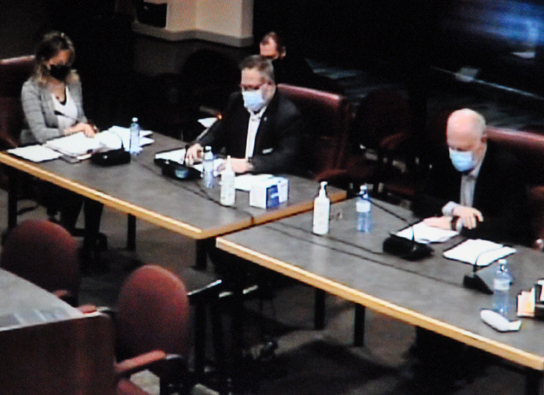 The City of Swift Current’s debt is set to increase by $10.7 million as a result of additional borrowing, but it will not result in rate hikes for Swift Current taxpayers.

Council members approved motions during a regular council meeting on Nov. 29 to advise the public of their intention to consider two borrowing bylaws for financing with general government and utility operations.

The one borrowing bylaw will be for an amount of $1,642,012 to fund a capital project at the water treatment plant. The purpose of the residual management project is to collect and dispose clarifier sludge and chlorinated filter backwash water from the water treatment plant. This waste is currently discharged into the Swift Current Creek, but updated environmental standards will prohibit this practice in future.

Councillor Ryan Plewis mentioned during the meeting this was a project expense the City had to commit to in order to be able to renew the operating license for the water treatment plant.

“There are various times in the life of council where you meet up against requirements,” he said. “And those requirements come maybe at the flick of a pen at the legislature somewhere far off or maybe in the backroom of a bureaucracy somewhere where regulations change, and this is one of those things. We have some increased requirements as a result of what we’re doing in our water and wastewater utility and those changing requirements simply mean that we have to invest in a big project.”

The City will be able to reduce the borrowing amount for this project by reallocating $907,988 from the Light and Power dividend to the water and wastewater utility. As a result, the amount that must be borrowed will be $1,642,012 instead of $2.5 million.

The other borrowing bylaw will be for an amount of $14.8 million to expand the City Light and Power franchise area. This is the value of the electrical franchise area in an agreement reached between the City and SaskPower.

The City boundaries expanded in 2011 with the annexation of land from the adjacent Rural Municipality of Swift Current. The City has been in lengthy negotiations with SaskPower to expand City Light and Power’s electrical franchise area to include the annexed land.

“The sources of funding to support the principal and interest payments for the borrowing will come mainly from the approximately 400 accounts in the expanded franchise area,” City Chief Administrative Officer Tim Marcus said.

Council members expressed support for borrowing this amount due to the long-term benefits of expanding the City Light and Power franchise area.

“Debt is a necessary evil, I guess, and this particular project is going to get paid back by the people that we are expanding to,” Councillor John Wall said.

Plewis felt the expansion of the electrical franchise area was one of the most important council decisions he supported as a councillor since 2009.

“This will probably have the most impact for members of our community than many of the other decisions that are being made around the table,” he said. “I think because of the competitive advantage that our Light and Power utility provides vis-à-vis SaskPower within our own franchise area, we are able to do pretty well as a utility and as a City we benefit from that.”

Mayor Al Bridal also spoke about the importance of this decision by the City to expand the Light and Power franchise area.

“I think this very well may be the best decision I will make in a four-year term here,” he said. “It’s a business decision. Our utility supplies our taxpayers with a nice dividend. … So this one is going to pay dividends into the future. For the next 15 to 20 years, it’s kind of a wash, but after that our children and our grandchildren are going to experience the same benefits that we experience, because our forefathers did not sell our utility back 50, 60, or 70 years ago. So I too will support this and it’s a good business opportunity. I know citizens will say it’s a lot of money, $14.8 million, but it’s money that the utility can make the payments on and it’s not going to impact anyone of us. It will be a wash, and I’m very excited about this.”

Marcus provided details during the meeting of the impact the additional borrowing will have on the City’s debt.

After consideration of debt repayments during the past year and the additional borrowing, the general government and utility operations debt is forecasted to increase by $10,780,524 to an amount of $72,002,710 at Dec. 31, 2021.

Marcus noted the City also has $24.4 million in property sales debt, which means the total long-term debt at the end of 2021 will be $96.4 million.

Bridal and Marcus provided additional details about the proposed borrowing during a media briefing after the meeting.

Marcus noted that the City is fully funded with regard to the amount that will be borrowed for the water treatment plant residual management project, and it will not require an increase in water rates.

There was a water rate increase of two per cent in early 2021 and the City is also able to borrow a lower amount than the full cost of the project due to the reallocation of funding from the Light and Power dividend.

“We are fully funded right now to cover off this borrowing,” he said. “So in 2022, depending on what projects move ahead, we will have to take a look at maybe changing the rate for 2022, but as of now, we’re good.”

Bridal mentioned the borrowing of $14.8 million to expand the City Light and Power franchise area will not result in an electrical rate increase.

“Our taxpayers won’t be burden with anymore taxes to pay this back and our electrical utility won’t increase their rates to pay this back,” he said. “The only time we’re going to see a rate increase is, we always match SaskPower. So when SaskPower goes up, we go up, because we put our rate up. That’s the only rate increase we will see and I anticipate some time in the new year that SaskPower is going to increase the rates and so then the City will, but if they don’t, we won’t.”

He noted that the City is actually borrowing the money for the franchise area expansion area earlier than needed, because it is hoping to save some money through securing a lower interest rate now.

“We are worried about interest rates going up in the next few months,” he said. “We likely won’t need this money for three, four months. … I’m very, very concerned, watching what’s happening in the world, that our rates will climb and so Mr. Marcus has decided to go out and seek that money now with possibly a better rate.”