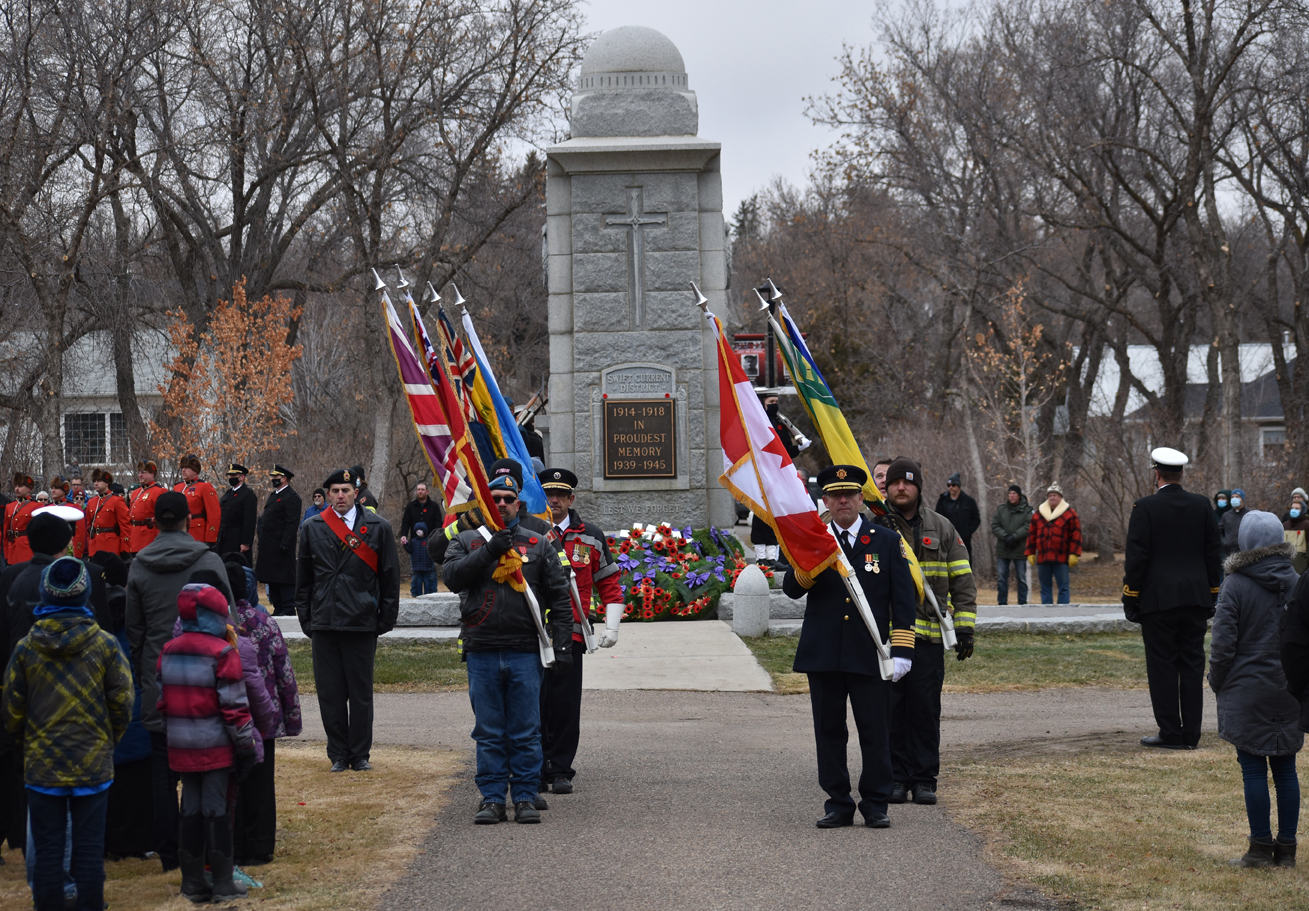 The flag party prepares to leave the cenotaph at the end of the outdoor Remembrance Day service in Swift Current.
Recent Posts
Recent Comments

This was the second year the Royal Canadian Legion Branch #56 hosted an outdoor ceremony in combination with livestreaming of the event due to the COVID-19 pandemic.

In previous years the day was marked with an outdoor parade at the cenotaph and thereafter the official indoor service was held at the high school.

Last year’s outdoor service at the cenotaph was scaled back with limited attendance due to COVID-19 precautions in place at the time. In contrast, this year’s Remembrance Day service was well attended and a large number of wreaths were laid at the cenotaph during the ceremony.

Second World War veteran John Watson actively participated in activities during Remembrance Week in the city. He was present at the flag raising ceremony on Market Square on Nov. 8, where he raised the poppy flag. He also attended the Remembrance Day service at the cenotaph, where he was joined by granddaughter Jacey Fullerton to lay a wreath in honour of the unknown soldier.

Watson spoke to media after the flag raising ceremony on Nov. 8 about his service during the Second World War and the importance of Remembrance Day. He appreciated the opportunity to raise the poppy flag for Remembrance Week.

“I respect it very much,” he said. “I think it’s good that we got around to doing it.”

He signed up with the Royal Regina Rifles (then known as the Regina Rifle Regiment) after he turned 18 in 1944. He completed basic training in Camrose, Alberta, and advanced training at Currie Barracks in Calgary. His unit then travelled by train to Halifax and they sailed across the Atlantic to the United Kingdom.

From Aldershot, a military garrison in England, they went across the English Channel to join the war effort on the European continent. He served on the war front in Europe during the final phase of the Second World War, as his unit moved through France, Belgium, Holland and into Germany. He celebrated his 19th birthday somewhere in Belgium.

After the end of hostilities in 1945 he remained in Germany to serve with the Canadian Army Occupation Force until his return to Saskatchewan in 1946.

“I was one of the lucky ones,” he said about returning home from the war.

His peacekeeping duties included helping to dismantle the launch pads of the German V-1 and V-2 rockets, which were the world’s first cruise missiles.

“It was interesting,” he said. “I helped dismantle them and did some guard duty and stuff like that.”

He felt Canadians are doing a good job of commemorating Remembrance Day and it has become more significant to them over the years.