Posted on 4 November 2021 by Matthew Liebenberg 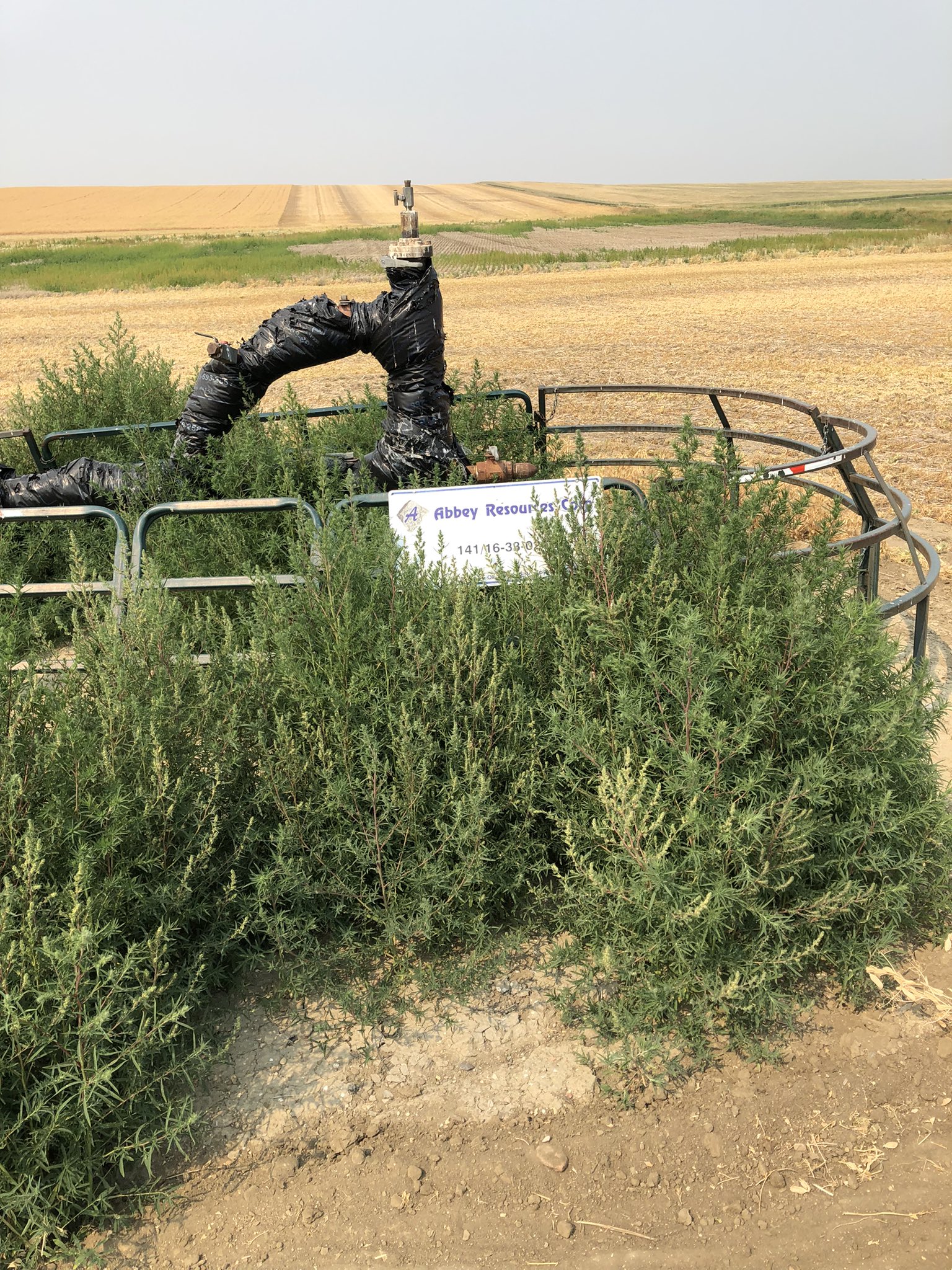 Landowners and rural municipalities that are not receiving their lease and tax payments from oil and gas companies, are turning towards the Saskatchewan government to address their concerns.

Several resolutions at the upcoming midterm convention of the Saskatchewan Association of Rural Municipalities (SARM) on Nov. 9 are asking the provincial government to take action.

There are landowners in southwest Saskatchewan who are not receiving their surface lease payments and who have concerns over well maintenance and reclamation.

The two farmers who spoke to the Prairie Post felt it is time for the provincial government to fix things. Both have gas wells on their land operated by Abbey Resources Corporation, a Calgary company currently involved in court proceedings against creditors.

He acknowledged that any steps taken by the provincial government will probably be too late to address the current situation for him and other landowners, but he does not want others to experience the same difficulties in the future.

“Natural gas prices are going up again,” he noted. “There’ll be more activity again. Sooner or later they’ll go back down, and then if they don’t change the regulations it will be somebody else dealing with this.”

Both Bradford and Gordon Jacklin, who has a mixed farming operation in the Abbey area, are owed significant lease payments for the gas wells on their properties.

Jacklin felt a change in legislation is needed, because farmers have no clout when oil and gas companies run into financial difficulties.

“We have no way to make them pay and we can’t force them to do reclamation after the pipeline breaks,” he said. “We have no power, and if there’s any money, we’re the last one paid.”

There have been over 30 leak events on pipelines associated with gas wells on Jacklin’s land during a period of about four years. Recently there have been four pipeline breaks in a single week.

“It seems like it’s more frequent, but maybe it’s because I’m paying more attention because they’ve not been doing the proper reclamation,” he said.

The pipeline breaks result in the release of gas, mud and produced water, which can be saline. A few areas on his land where ineffective reclamation took place after a pipeline break still dates back to when the gas wells were operated by a different company.

Cleanup procedures after a pipeline break require replacement of topsoil in the affected area, and without proper reclamation it might take much longer for plant growth to recover.

“It’s annoying and it will be slow to return to a natural state,” Jacklin said. “Instead of happening within a year or two years, it will take 15 years or longer to reclaim. … There’s weeds for a little while, but grass will come back eventually.”

Bradford referred to issues with regard to gas wells on his land. There is a lack of weed control around well sites and pipelines are in poor shape, resulting in a rupture every once in a while.

He felt the key issue to be addressed through government regulation is the protection of all stakeholders.

Oil and gas companies are currently able to sell their marginal and aging wells without sufficient guarantees to ensure there are adequate funds for lease payments and cleanup costs. These assets are acquired by smaller companies, often at bargain prices, but they do not have the financial means to deal with the high liability of their energy assets.

“What they have to do is have these companies post a bond when the wells are first drilled, when they are at their maximum capacity,” he said. “That’s when they’re making the most money. So post a bond for cleanup right at the start with the government. And the second thing is, they need to stop sales of companies selling garbage assets to companies that have nothing for assets. If the company that’s buying the assets doesn’t have enough to cover for the cleanups, then the sale should not go through.”

Bradford emphasized he is not against oil and gas development. He is concerned the lack of government regulations to address these problems will actually be detrimental to the industry.

“If they don’t change these regulations they’re going to get to the point where they’re going to have pushback from the public,” he said. “The oil and gas industry is being hurt by this, because they’re loosing the good will of the leaseholders and other stakeholders. … They have to change it or we’re going to end up in a situation where we won’t even have an oil and gas industry, because the people won’t put up with it. It’s got to be fair for everybody.”

“It’s a really important issue,” he noted. “And we’re hearing it loud and clear from a number of rural municipalities, mostly on the west side of the province. All the way up from the south end of the province to the northwest.”

Information provided to SARM by rural municipalities indicate there is a lot of outstanding taxes in the oil and gas sector.

“Some of them are from wells that may be closed, but some may be from wells that are producing very little,” he said. “So the companies seem like they’re not paying the taxes on those kind of well operations. Rural municipalities don’t really have the mechanism to collect those taxes. There are a couple of different sets of legislation, but through the Municipalities Act they don’t really have the wherewithal to be able to go after those taxes.”

As a result, rural municipalities have prepared three different resolutions on this matter for consideration during the SARM midterm convention, which will take place as a virtual event on Nov. 9.

“If those resolutions pass, we’re going to be lobbying even harder to ask the Government of Saskatchewan to make some changes so that those rural municipalities can collect some of that money and make some changes in the future to make sure it doesn’t happen again,” he said.

He felt unpaid taxes by oil and gas companies is not a new issue, but it has become more significant in recent years due to economic circumstances.

“I think it’s something that’s been there for quite a while,” he said. “I don’t think it’s been to this magnitude, because of the fact that we did have a slump in the oil and gas prices. … Some are forecasting we may see higher prices ahead, but some of this is because of lack of demand because of COVID. At the same time, many of these RM’s are having to make do without this tax money to operate their rural municipality. They have to collect the money somewhere to run their municipality. They still need to maintain the roads and bridges. So it puts them at a disadvantage in that sense.”

A resolution submitted by over 40 rural municipalities for consideration at the midterm convention states that oil and gas companies are increasingly defaulting on their tax payment obligations, which means that municipalities have to lower their level of service to ratepayers.

This resolution notes that an increasing number of oil and gas companies will follow an approach of selling their assets through court orders. In addition, they will obtain a vesting order during court proceedings to protect the purchasers from paying municipal and education tax arrears and it includes a direction from the courts to have the tax arrears written off.

The proponents of this resolution are therefore asking SARM to lobby the provincial government to create legislation that will allow municipalities to register a lien against oil and gas licenses and to provide a procedure to act on that lien.

A second resolution submitted by one rural municipality for consideration at the midterm convention asks the Saskatchewan government to use royalties collected on resource sales to compensate rural municipalities for these outstanding taxes.

A third resolution submitted by three municipalities notes that it is difficult to use the Tax Enforcement Act and the Municipalities Act to collect tax arrears from oil and gas companies. The resolution therefore asks SARM to lobby the provincial government to amend the Municipalities Act, the Tax Enforcement Act, and the Oil and Gas Conservation Act to allow the suspension of a resource company’s operating license if it does not stay current with the payment of municipal taxes.

A previous resolution about the failure of resource companies to pay taxes was passed in 2018 at a SARM midterm convention. The Saskatchewan Ministry of Energy and Resources responded to that resolution in January 2019, indicating that the government was not planning to expand the scope of its Licensee Liability Rating (LLR) program at that time to include the collection of municipal taxes or surface rentals. The provincial government’s response stated that rural municipalities already have extensive powers under the Municipalities Act to pursue collection of unpaid taxes and the government encouraged local authorities to use those existing powers.

“I don’t feel that is actually valid, and I think those rural municipalities that are affected by this issue would not agree with the province on that either,” Orb said. “That’s why they’re asking for something else to be done. … There has to be a different mechanism to be able to recoup some of the losses that municipalities are feeling.”

Cypress Hills MLA Doug Steele said he is aware of these concerns by landowners about lease payments and by rural municipalities about tax arrears.

“This has been a concern for a number of years,” he said. “It’s unfortunate. Some of the oil and gas producers are having difficulty in meeting their financial obligations on surface leases and RM taxes and that type of thing. It’s just been with the craziness in the oil and gas industry and what’s happening out there.”

He felt there are existing avenues that can be followed by landowners and rural municipalities to deal with outstanding payments by oil and gas companies.

“There are ways that the landowners and the RMs can reach out to try and get some of their arrears dealt with,” he said. “The landowners can pursue unpaid royalties and rentals through the courts or in the case of municipalities there are mechanisms under the Municipal Act that provides RMs the power to recover some of the unpaid royalties and taxes, but we hope that they can negotiate and work with the industry to start out with, but as time moves on, it’s hard for them to do that. So they have to pursue otherwise.”

He added that he has been forwarding these concerns of landowners and rural municipalities to the Ministry of Energy and Resources.

“The government is there,” he said. “It’s just a matter of the timing and when they can step in to do things. It has to go through a process. We encourage the RMs and the landowners to contact the Ministry of Energy and Resources if they have any difficulties or trouble with payments and operational stuff, because we will work with the landowners and the RMs to try and mediate this through the system, but there is a system when it gets to the legal side of all that. You got to be quite respectful to everyone so that it’s done properly. And when things come down to where there is abandonment or orphaned locations, we have the orphan well program. … So we try and work this all through the system.”