Southwest Saskatchewan writers contribute to anthology about life in a pandemic

Posted on 12 January 2022 by Matthew Liebenberg 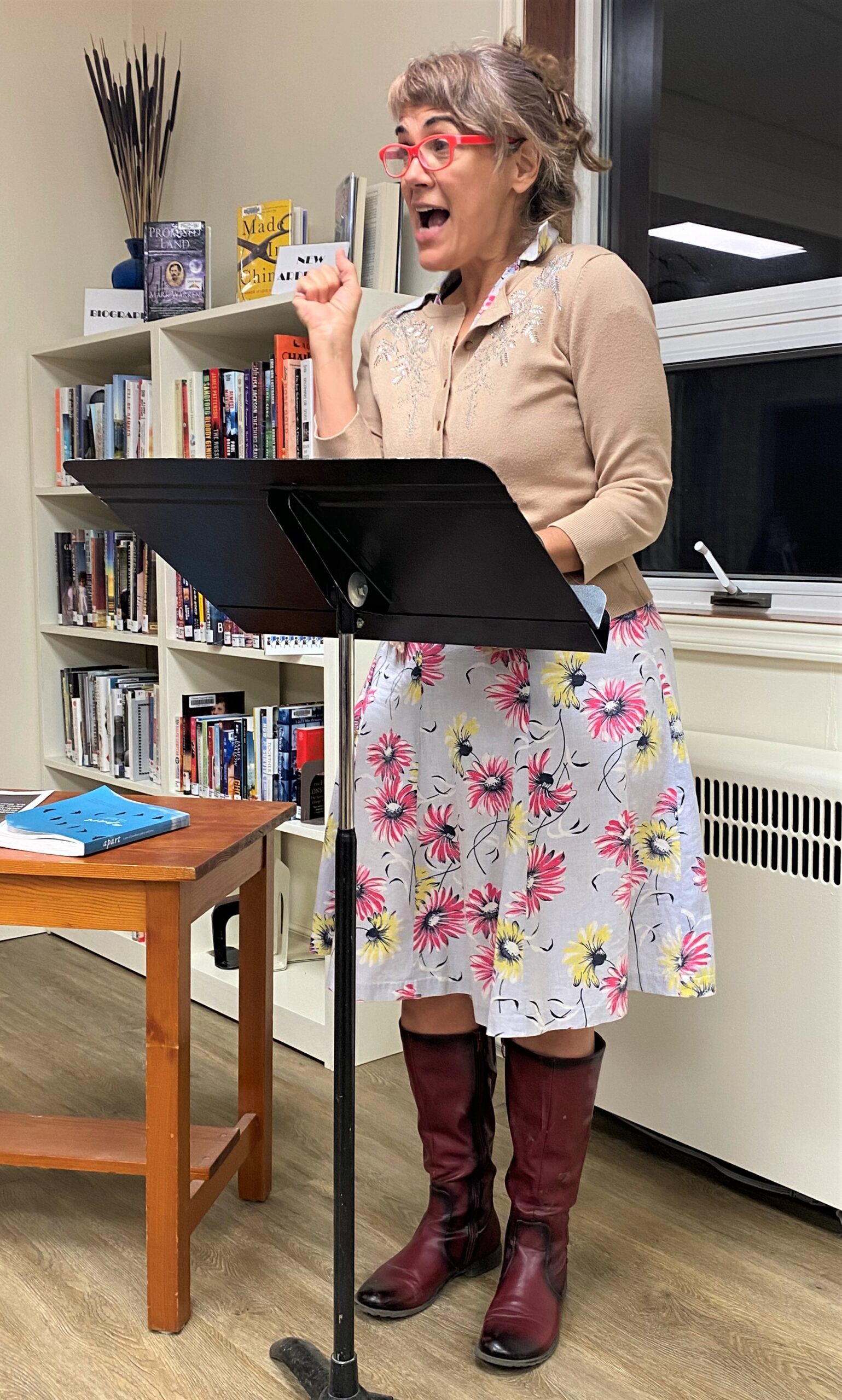 Val Marie writer Madonna Hamel reads from her contribution to the pandemic anthology during an event at the Eastend Library, Nov. 4. Photo by Diana Chabros
Recent Posts
Recent Comments

The extraordinary and in many ways life-changing experience of a society in lockdown at the start of a global pandemic in 2020 was the inspiration for the first-ever anthology published by the Saskatchewan Writers’ Guild (SWG).

SWG Program Manager Yolanda Hansen said there has been a really positive response to the anthology and it has been well received since the initial online launch in July 2021.

“I think we achieved what we set out to,” she noted. “Everybody who was involved in it, is very proud of the final product. … I think all of our contributors are quite proud of the book and of being in it. It’s pretty special that the anthology includes both established writers with multiple books or multiple publications, and then there are people in there that this is their very first publication ever. That’s a very proud feeling for them too that they’re able to be published along with some big names.”

All the contributors to this anthology are SWG members, which was a key requirement for consideration of submissions. Other criteria included that their submissions were previously unpublished and related to the anthology’s theme of life during the pandemic.

“We had started to make the plans for this book about six months into the pandemic, and by that time it was really clear to us that our members were missing out on a lot of opportunity,” she said. “Events were cancelled and they weren’t able to do a lot of programming that they were used to doing. So we thought, let’s create some opportunities for our members. Everybody was paid for their submission.”

More than 200 submissions by nearly 100 writers were received, and the work of 68 writers were selected for the anthology. Their contributions include poetry, fiction, nonfiction, and a scene from a play.

The anthology is both a showcase of the writing talent of SWG members and an account of a momentous moment in human history.

“Maybe people are sick of hearing about the pandemic, but we also recognize that it’s a lived experience for everyone,” Hansen mentioned. “Writers of all genres have the ability to reflect upon and to write about a shared lived experience, and we thought they had something important to say.”

Writers have always been using their storytelling to respond to and interpret what happens in society. This anthology therefore continues that tradition.

“As I read through the final book, I found myself empathizing with everyone and finding myself in that writing too,” she said. “All these writers, whether it was poems or short stories or whatever, were writing about things that readers will find very familiar, because we all lived through it. We all lived through social distancing and masking and not seeing our families on holidays and all of those things, and our members just were able to put that into words and capture some of it.”

The SWG hosted two in-person launch events for the anthology, but there were also other events organized by writers.

“That’s been really exciting to see a lot of ownership by the contributors,” Hansen said. “It’s not just us putting things on, but the contributors have taken it upon themselves to do their own launches online or in person.”

Two of those other launch events took place in southwest Saskatchewan during the fall of 2021, featuring readings by Caitlin McCullam-Arnal from Eastend, Madonna Hamel from Val Marie, Helen Mourre from Rosetown, and Peggy Worrell from Swift Current.

These four writers received a SK Arts micro grant. They held an in-person reading in Eastend and an online reading during a Write Out Loud event hosted on the Lyric Theatre Digital Stage.

McCullam-Arnal said the reading in Eastend was well attended and due to physically distanced seating there was not room to accommodate everyone interested in the event.

“The writers met for dinner before and it was almost like a mini writers’ retreat,” she recalled. “We all shared about why we write and what we’re doing, and so it was a really positive experience.”

She felt the virtual Write Out Loud reading was beneficial to reach a wider online audience, including her family in Ontario. This is the first time she is published in an anthology, and she appreciated the opportunity as an emerging writer to have her work in the same publication as established and notable authors.

Her fictional piece Leonard goes to Florida is about a farmer’s journey during the pandemic to reconnect with his daughter and hopefully also get a vaccine shot.

“He’s inspired by many of the people in my community,” she said. “I also grew up in a rural community in Ontario. If I think far back enough, he’s probably inspired by the farmers and ranchers that I grew up with as well. … The main character is male, but I hope people would see the female characters, because I was trying to say something about the role of women in a lot of ranching and farming communities.”

According to McCullam-Arnal the pandemic allowed her to be more of a writer, because she was at home and she used the opportunity to write and also learn through online writing workshops.

“I was really inspired by what was going on around me,” she said. “I have family in the United States and Toronto. So I was hearing about how this pandemic was affecting them. I wanted to bring both worlds together, the farming community, but also the city.”

She participated in an online SWG workshop about conflict and tension in fiction writing, which helped her to develop the character Leonard and she is now working on a novel based on the town that he is from.

“I came up with this character Leonard and it just all came together,” she said. “It was the first time this ever happened to me. It just came out. I didn’t really think that really happened to artists. I thought it was a cliche, but I literally wrote out a rough draft of it in an hour and wrote it in a week or two.”

Madonna Hamel wrote a nonfiction piece for the anthology titled Essential Work. She was the writer-in-residence at Wallace Stegner House in Eastend when the pandemic unfolded, which provided her with a unique perspective on events. She had plans on how to spend her birthday there, but the pandemic made it impossible.

“Before it hit the plan was that my sister would come and celebrate my birthday at Stegner House,” she recalled. “So it was way more exacerbated, this feeling of being alone and not with my things, because I couldn’t be with family and I didn’t have anything around me that was mine. I was in this great place, but it wasn’t how I thought it was going to be on my birthday.”

She used this sense of being away from home and familiar things to reflect on homelessness and how the pandemic experience is different for the haves and the have nots.

“Lately I’m thinking a lot about how people on the margins, people on the fringes are actually not a minority,” she said. “The minority are the wealthy and when something like COVID happens or the pandemic, it’s interesting how much we interview the experts or the famous people, and these aren’t the people that are suffering as much as the people that have already been marginalized.”

She actually wrote her submission to the anthology as a companion piece to something else she wrote while staying at Stegner House during the pandemic. That previous piece, called Hearth Day, is a lament about not being able to celebrate Earth Day during the pandemic. It was published in the Canadian magazine Prairie Fire and won its creative nonfiction prize. She has been keeping a pandemic journal and it became a useful resource for writing another piece, which she then submitted to SWG for the anthology.

Peggy Worrell wrote a historical fiction short story, On the Eve of Halloween, inspired by the death of her grandfather Heinrich Weinmeister in Rhein, Saskatchewan during the Spanish Flu.

She immediately thought about her paternal grandfather when she saw the SWG call for submissions for an anthology about the COVID-19 or other epidemics.

“I knew he was young and I knew my grandmother Elizabeth was widowed with six children,” she said. “My father had told me that he died on the eve of Halloween, and because my own dad was the eldest son, he had to quit school in Grade 6 to help his mother on the farm and that spelled the end of his childhood.”

She carried out detailed background research and the story includes references to news and events from contemporary newspaper articles.

“Research is in some ways the best part of writing, because of how much a person learns, and the parallels between the Spanish Flu and COVID are remarkable,” she said. “That was apparent immediately. The fear, the travel restrictions, the wearing of masks, public buildings closing, experimenting with some questionable treatments, all of that. And so that lead me to think about comparing and contrasting the two epidemics in part one and part two of my story.”

The second part of the story features a family’s experience in Regina during the COVID-19 pandemic. Worrell created a fictional character, also called Elizabeth, in the role of great granddaughter of Heinrich Weinmeister.

This story of life during two different pandemic is about loss and disappointment, but also about perseverance during challenging times.

“It’s also about resilient women who make a live for themselves and their children after their husbands died,” she said.

Worrell felt this anthology represents a meaningful contribution about the impact of the pandemic on ordinary lives.

“It’s a historical record and what stands out for me is that it records how the pandemic has touched individual lives in a real and personal way,” she said. “And that’s of far more interest to me than reading statistics and looking at graphs and all of that. I hate to use the kind of trite expression of it being a snapshot in time, but to some extent it is that. And when these pieces were written, none of us had any idea that the pandemic would still be at the point it’s at now. We couldn’t have imagined that.”

Copies of the anthology are available from SWG and can be ordered through their website at http://www.skwriter.com