Posted on 20 October 2021 by Matthew Liebenberg 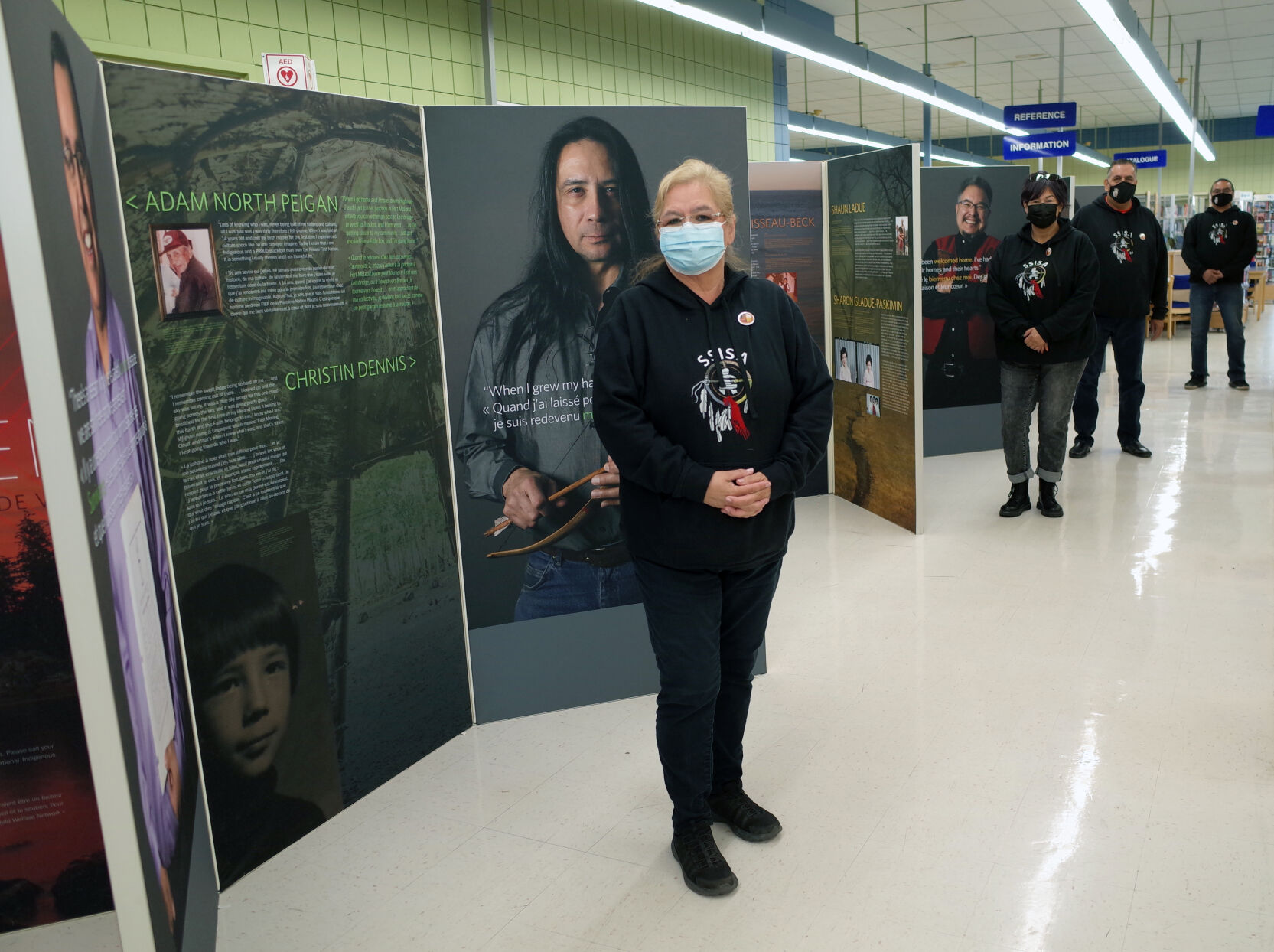 A touring exhibition that aims to increase public awareness about the Sixties Scoop in Saskatchewan made a recent stop in Swift Current.

The exhibition Bi-Giwen: Coming Home â€” Truth Telling from the Sixties Scoop was on display at the Swift Current Branch Library, Oct. 2. It was hosted by the library in partnership with the Sixties Scoop Indigenous Society of Alberta.

This first-of-its-kind exhibit about the Sixties Scoop was created by the Legacy of Hope Foundation, a national Indigenous charitable organization that promotes healing and reconciliation. It has a mandate to educate and create awareness about the intergenerational impacts of the residential school system and the Sixties Scoop on survivors, their descendants and communities.

Adam North Peigan, the board president of the Legacy of Hope Foundation as well as the Sixties Scoop Indigenous Society of Alberta, was present at the exhibition in Swift Current.

He said this exhibit was very well received in the Alberta libraries division when it travelled all over the province shortly after former Alberta Premier Rachel Notley delivered an apology to Sixties Scoop survivors in May 2018.

“We wanted to share this important resource with the province of Saskatchewan, because at the height of the Sixties Scoop in the 1960s, Saskatchewan had the largest number of indigenous children in care,” he explained.

He noted that the Saskatchewan and Canadian governments placed a lot of resources into the development of the Adopt Indian MÃ©tis (AIM) program. It included the development of a catalogue that contained details and photographs of Indigenous children in foster care in the province.

“That catalogue was basically sent out to very affluent communities in Saskatchewan and they had an opportunity to flip through the catalogue like a buffet and pick and choose which kids they wanted to take on,” he said. “So because of that, we felt it was important that we bring this exhibit to Saskatchewan as an opportunity to educate mainstream Canadians in Saskatchewan about the atrocities and the legacy of Sixties Scoop in Canada, because it is a part of the history of the Indigenous people in Canada that nobody likes to talk about.”

Swift Current was the third stop on the exhibition’s tour around Saskatchewan. It was already on display in Yorkton and Regina, and subsequent stops during the second week of the tour were in Prince Albert, Saskatoon, and North Battleford, which was the final location on Oct. 8. There was a positive response to the exhibition during the initial tour stops.

“People are really responding quite well,” he said. “One thing that is very prevalent is we’re hearing that mainstream Canadians in Saskatchewan never knew that this happened. And so they’re coming out and realizing that a travesty like this had happened, because when they were going to school, nobody told them about it. It was a hidden government policy. We’ve been overwhelmed with a lot of the response that we’ve gotten from Saskatchewan.”

Acting Swift Current Branch Library Manager Donna Thiessen said the library submitted a request to host this exhibition, which was accepted due to Swift Current’s location as a major centre in southwest Saskatchewan.

“Every library needs to play a role in terms of truth and reconciliation, and one of those pieces is to do public education,” she mentioned. “This is one of the key government policies from the 1960s that has had an effect on Indigenous people, and we felt this is an area that a lot of people maybe don’t know much about. I particularly like this exhibition, because it’s giving the personal stories of people and it’s really emphasizing the effect it had on individuals.”

The 94 Calls to Action in the 2015 report by the Truth and Reconciliation Commission of Canada refers to the importance of education in reconciliation. She noted that libraries are called on as one of the institutions to play a role to promote truth and reconciliation.

“Every library needs to play a role in terms of truth and reconciliation, and one of those pieces is to do public education,” she said. “We provide resources to people that they’re interested in, but we also play a more active role in terms of promoting particular areas within the community and particular issues that is important for the public to know about.”

The exhibition explores the experiences of Sixties Scoop survivors through the first-person oral testimonies of 12 survivors. It was developed with input from the National Indigenous Survivors of Child Welfare Network.

The Sixties Scoop was the result of child welfare policies towards Indigenous children in Canada from the 1960s to the 1980s. It resulted in the removal of more than 20,000 First Nation, Inuit and MÃ©tis children from their families. They were placed in foster homes and adopted by non-indigenous families.

According to North Peigan the Sixties Scoop was as traumatic or perhaps even more traumatic than the residential school system, which explains why there is less discussion about this period.

“There’s a lot of shame that’s brought with it, and if we go back to what happened in Saskatchewan, where they implemented the AIM program, government really needs to take responsibility for those horrific policies that further oppressed our people and continued that forced assimilation of our people into mainstream culture,” he said.

“Since that apology we have not really seen anything that Saskatchewan has put on the table to bring about reconciliation for the Indigenous people in Saskatchewan,” he mentioned. “It’s really easy to be able to say I’m sorry, but what really makes that significant is putting actions to words, and we haven’t really seen that apology being followed up by meaningful reconciliation for Sixties Scoop survivors in Saskatchewan, because there hasn’t really been a movement to be able to move that forward with healing programs and to bring survivors together so they can start talking about their stories.”

The impact of the Sixties Scoop has been far-ranging. Children were even sent to other countries for adoption and they have never returned to Canada. Sixties Scoop survivors in Canada continue to live with the trauma of abuse and the loss of their identity, language and culture.

North Peigan is a Sixties Scoop survivor taken from his parents shortly after his first birthday. He was placed in six non-indigenous foster homes and three children’s homes. He was able to return to his community, the Piikani First Nation, at the age of 17.

He experienced anger as a young man, and he struggled with alcohol and drug dependency. His life-changing event happened in 1994, when his two oldest daughters were placed in foster homes while he was still living on the streets of Vancouver.

“The child welfare worker came and told me that if I don’t do anything about my drinking, that I was going to lose my kids and I will never see them for the rest of my life,” he recalled. “All of a sudden the light bulb went on and I thought the cycle is repeating itself and I told myself I need to do something, because I didn’t want my kids to have to go through what I went through. So that’s when I made the decision that I was going to do something to turn my life around and I went to a treatment centre. I started to talk about my anger and my frustration and my loss of identity, and that’s where my path to wellness began.”

“We’re living in 2021 and still today you will see a high number of our children that are in care,” he said. “It’s often referred to today as the Millennium Scoop. There needs to be a shift in how government deals with Indigenous people when it comes to child protection. There needs to be a movement where the child welfare services have a better understanding of our history and what has happened to us, so that when they’re making decisions, they can have a lot more empathy. â€¦ We’ve suffered hundreds and hundreds of years of oppression. That healing is not going to happen overnight. It’s going to take time and I like to think we’re beginning that journey now, but it’s going to take time.”

A virtual version of this Sixties Scoop exhibition with the first-person oral testimonies of 12 survivors in video format is available on the Legacy of Hope Foundation website (www.legacyofhope.ca).